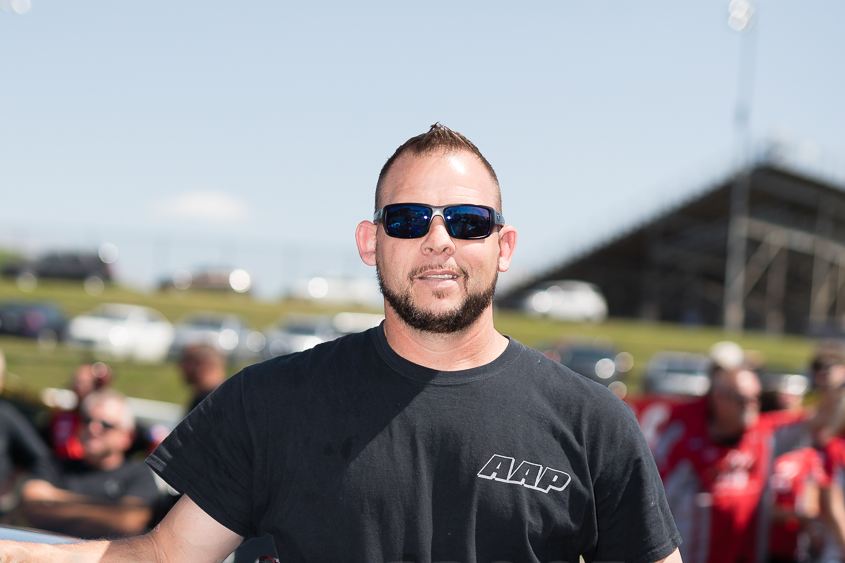 Past PDRA Pro Extreme world champion and current NHRA Pro Mod star Brandon Snider will add another class to his repertoire this weekend when he makes his Top Alcohol Funny Car debut at the NHRA Four-Wide Nationals in Las Vegas. Snider will drive the YNot Racing/J&A Service Camaro typically driven by Annie Whiteley.

It’s a one-race driving engagement for Snider, who has been working with Jim and Annie Whiteley’s YNot Racing team on torque converter technology since last year. He tested and earned his license in one of the team’s three Top Alcohol Funny Cars at Bradenton over the winter but didn’t have any plans to compete in the class.

Whiteley drove the team’s older car with a converter and converter drive at the Mid-West Drag Racing Series season opener in Texas a couple weeks ago, then the team swapped the setup into Whiteley’s NHRA car. The Vegas outing will serve as a test session as Snider and the team put the converter setup through the paces in quarter-mile competition.

“Jim called me last week and said they’d like to see what the thing would do in the quarter mile,” Snider said. “The plan is to take it to Vegas, which isn’t far for them. We’re going to run in quarter mile there and just try to get some more data on it. The end goal is to have [Annie] in that car with a converter drive by the end of this year if we can get it competitive with the clutch cars.”

The combination performed well in the MWDRS eighth-mile format, qualifying No. 2 and losing on a holeshot in the second round at Xtreme Raceway Park. Snider is hoping the car will perform similarly on the long track.

“Right now, it is competitive in the eighth with the clutch cars, but we just don’t have any quarter-mile data on it yet,” Snider said. “That’s what we’re going to do this weekend. I know it’s a race, but we’re going to use it as a test session also to get more data and see if we’re off. It’s one thing to run these cars to the eighth, but going out the back, it’s a whole different animal. We’re going to use it for a test session, get some data, and hopefully while we’re there qualify well and go some rounds.” 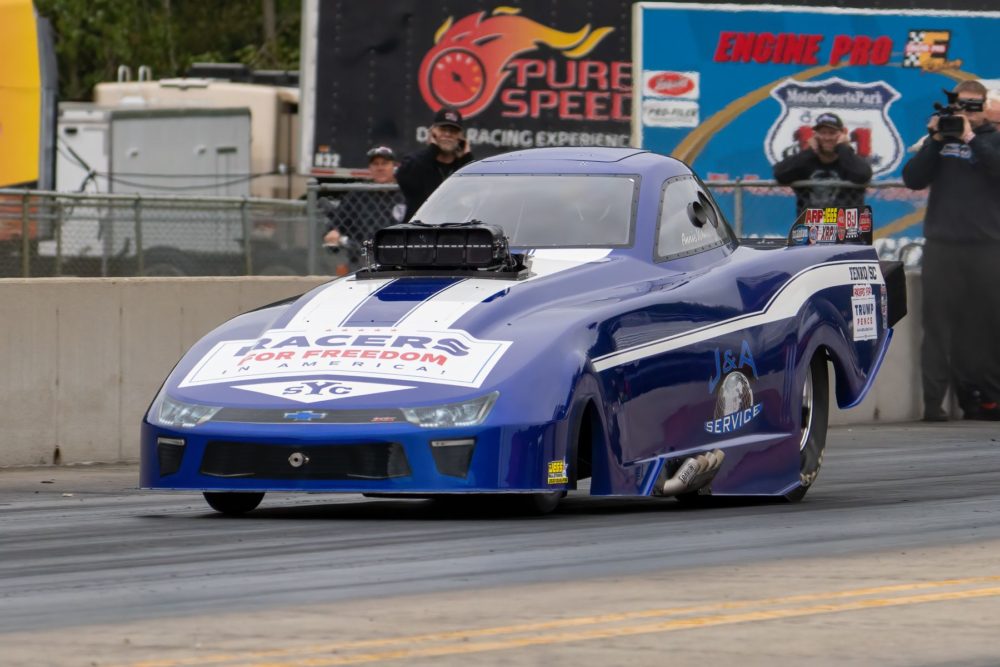 Snider will collaborate with Whiteley’s tuner, Mike Strasburg, and his brother Jeff. The brothers work together on the car and at their family’s business, B&J Racing Transmissions. They’re already intimately familiar with the car, while Snider will bring his converter expertise to the table.

“Mike pretty much gave me free rein and told me to do whatever I need to do, he was there to learn and help,” Snider said. “We changed the fuel system and the way we run the car. They have a really, really good engine program already. They make big power, and that helps. They have a good car, good blowers, good engines. When you’re bringing that to the table, you’ve got something to work with already. You’re not looking for 20 or 30 horsepower because they’re already making it.”

To run the Funny Car, Snider will borrow from his experience with screw-blown Pro Extreme cars in eighth-mile competition and roots-blown NHRA Pro Mod cars in the quarter mile. He’s used a torque converter in both applications. The Pro Extreme car used a C-rotor screw-type supercharger, while the Top Alcohol Funny Car runs a D-rotor screw blower, which is a smaller rotor, and is limited to less overdrive.

“You don’t have the horsepower, the steam, that we had in Pro Extreme, but you have a similar engine combination with a screw blower,” Snider said. “I’ve looked at some of my old notes from Pro Extreme, and yes, some of it does cross over. It’s just going to be a learning curve and a lot of studying and looking over data and changing ratios and converter stuff. We’ve been really fast with it to the eighth. I think we’re pretty close. We’re not out of the ballpark.”

There isn’t much crossover on the driving side, though. The two cars require very different driving styles, which Snider quickly learned when he earned his license. On his first full run, he clocked a 3.64 at the eighth-mile mark and after letting off the throttle and dumping the ‘chutes around 800 feet managed a 5.61 at only 205 mph in the quarter mile.

“When you sit right behind the engine and that body comes down, it’s a whole different feeling,” Snider said. “As you take off and the rear tires start growing, you actually get more visibility. When you’re in that car, you’re barely looking over the top of the injector hat. It’s not like you can see right in front of you, but as you take off and the tires get taller, your visibility becomes unlimited. You can see everything. That’s a little bit different.” 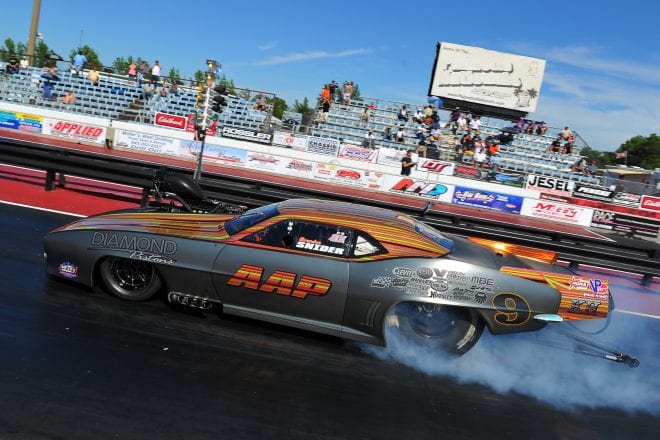 “In a door car, if you get out of the groove a little bit, you can make a small adjustment on the steering wheel and it will bring you back over,” Snider said. “With this thing, you have to turn it sometimes at 90 degrees to get it back over. It’s that much slack in it. It’s just way different.”

Snider is excited about the potential of the combination in Top Alcohol racing, as well as fast doorslammer racing. He recognized the potential while racing in Pro Extreme and has since started assembling and developing his own converters in house along with his longtime right-hand man, Jimmy Crenshaw. He believes there’s still a lot left on the table.

“You look at all the cars in NHRA Pro Modified, none of them run clutches anymore,” Snider said. “It tells you that the converter is taking over, and there’s still a lot there to be learned. We’re not finished with them. I think we’re just getting started in what they can do. In a Funny Car, you have to remember that thing is 300 pounds lighter than our Pro Modified car and it’s making approximately 250-300 horsepower more. Why wouldn’t it work and run really, really fast?” 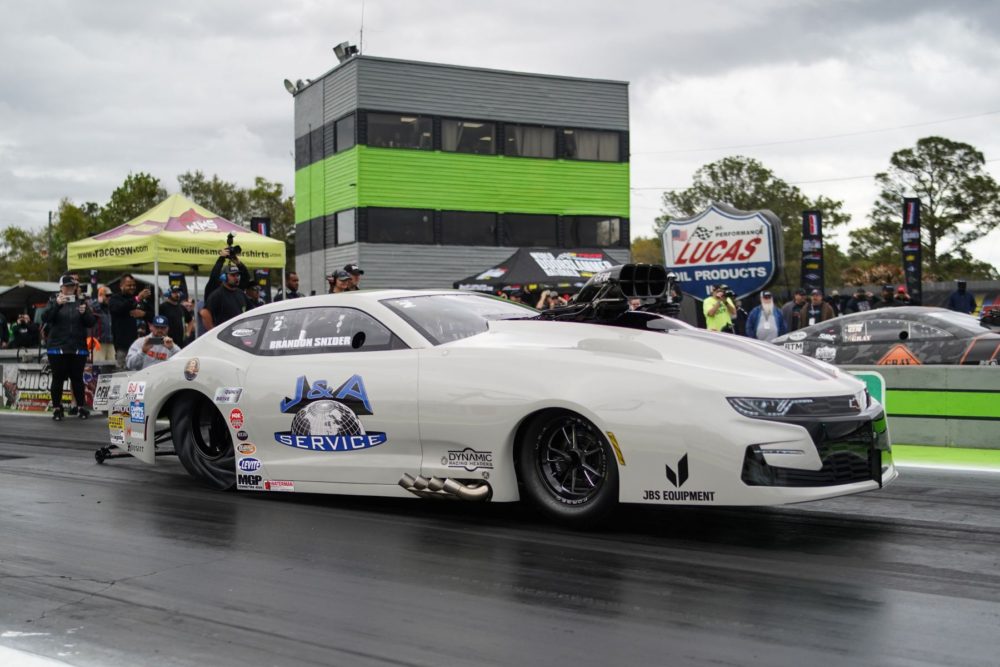 This weekend might be the only time Snider actually races the alcohol Funny Car this season, but he’s looking forward to the challenge and sees it as a unique opportunity. He credits the Whiteleys for giving him the opportunity, as well as for helping with funding for his NHRA Pro Mod program.

“Mr. Jim and Miss Annie, they do so much for the drag racing community,” Snider said. “Not only sponsoring the Mid-West series and the NHRA Pro Mod Series, but there’s a lot of racers they help that people don’t realize. I appreciate the opportunity to help with this and even more to be able to drive for them, even if it’s just this one race. It’s a big opportunity for me.”