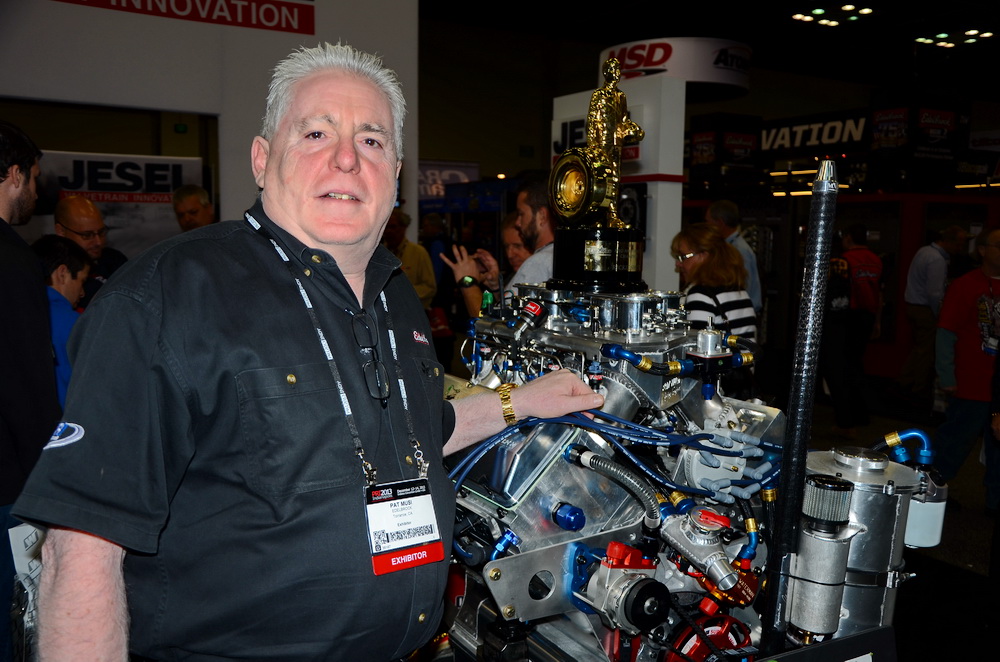 “It’s been a while since I’ve been that pissed off,” admits Pat Musi, referring back to late June at the PDRA Summer Drags in Martin, Michigan, where his 23-year-old daughter, Lizzy, was forced to shut off on the starting line during her first-ever Pro Nitrous final round. “I was so mad—a bad solenoid, really? I couldn’t believe something like that got past us, and to tell you the truth, I stayed mad about it all the way up until the win light came on [at the next race] in Virginia. When we won that race, I finally got over it.”

In all fairness, they all “got over it.” Collectively, the whole team got over the hump, breaking through to score their first victory in inarguably one of the most competitive classes in drag racing: PDRA Pro Nitrous.

Now, though, having done the deed once, Musi, daughter and crew have a new level of expectations when they roll into the race track. The performance displayed by Lizzy’s 903-cubic-inch Pat Musi Racing Engines-powered Dodge Stratus, as well the slew of other top-tier Pro Nitrous teams running Pat Musi power, including five-time event winner Jason Harris (beaten only by Lizzy in the Virgnia final), has captured the attention of everyone in fast doorslammer racing and painted a massive target on Pat’s back. Sitting down at Musi’s Mooresville, North Carolina-based engine shop, the racer, engine builder and businessman spoke about the fast-approaching end of the PDRA season, what it’s like to see his daughter succeed, and what it takes to stay at the top of the qualifying sheets.

You’re no stranger to success, but after that first Pro Nitrous victory with Lizzy behind the wheel, are you guys more driven than ever, or does winning a race take the pressure off?

Yeah, we’re driven, more driven. Like I told my brother a long time ago, unfortunately, we don’t go to the race track to make friends. Just like if we were boxing, we’re trying to knock these guys out of the ring. Well, that’s what we’re trying to do, and that’s how you have to approach it at this level. We could eat and have beer or whatever later. I’m all good with that; I’m OK with that. But when I’m at the race track, it’s a whole different deal.

What do you think has flipped the switch for Pro Nitrous? This was a class that was seemingly drying up last year, and now it looks—at times—as strong as it’s ever been.

I’ve been saying it for a long time, and I hate to be the guy to say, ‘I told you so,’ but they had to put a minimum weight on the class. You had guys with these super lightweight cars—a couple of them—and now you’ve got an even playing field. I know there’s guys bitching about the cubic-inch deal, but guess what? The 5.300-inch bore space puts a limit on it.

It had gotten out of control. Not a lot of people can spend the money that was being spent on these light cars and, telling the truth, they don’t last. You take this car that Lizzy’s driving right now; this thing’s a rolling chassis from 2010, built before the lightweight deal. It was built for NHRA, and it’s still a good car. If that was a lightweight car, it’d be two years max, and that’s if you don’t shake it to death; one year if you go up there and shake it every time you go up there.

The engine builder wars in Pro Mod, particularly amongst nitrous racers, has really heated up with a lot of the biggest names in drag racing sending their best pieces into battle. What’s it like to go out every weekend in that kind of highly competitive environment?

Staying hungry is the name of the game, right?

It is. But let me tell you it’s not all about parts and pieces. It’s about good people and hard work. Over in Qatar last winter, we made 150 laps between three cars and we learned some stuff, and we’re continuing to learn.

And the good people extend to our customers, which I truly believe are the best bunch of guys we could ever want to be racing our stuff—Tommy Franklin, John Hall, Mike Bankston—then we’ve got Jason Harris, who has the PDRA Pro Nitrous championship sewn up, the world’s quickest and fastest nitrous car in the eighth mile with Khalid Mohammed and EKanoo Racing, and last year’s NHRA Pro Mod champ and the quickest and fastest nitrous racer in the quarter mile, Rickie Smith. We’ve got great guys. Rickie’s been a big part of our program these last few years and that relationship has really brought us ahead a ton. We laugh that he’s firewall-back and I’m firewall-forward. With this group, unfortunately for some of these guys, we’re going to be tough to beat for right now.

How validating is it to have the kind of success you’re having right now? At PDRA Under the Lights in Tulsa, all four of the Pro Nitrous semifinalists were running Pat Musi power; was that a pretty surreal moment?

For me, personally, the real stunner was back in Virginia when we went up there for that Friday-night qualifying session. That was a moment that literally dropped my jaw. We went up there, figured we’d go a 3.77, maybe .78, had the car kind of safe. We’d gotten a little lost, Rickie [Smith] came over and calmed us down and told me to put a baseline deal in the thing and it’d go fast. When that 3.74 came up on the board, you could have heard a pin drop, first off. I never heard a race track get so quiet. I said, ‘You got to be kidding me.’ I just couldn’t believe the run that thing made.

I’m not sure how to say it, but my problem has always been that I’m a racer at heart. I started racing, okay? I happened to be good at it. I ran IHRA, Pro Street, where I ran, I ran good. You might say, ‘Pro Street, well, that ain’t big time.’ Well, guess what? Whoever was out there was sending their best stuff to outrun us. My problem, what I’m trying to explain, is that I wanted to race more than I wanted to build engines. Yeah, I wanted to build engines, but I really wanted to go racing. After my wreck I was forced to sit on the sidelines and it gave me time to think. Now, I’m totally focused on these engines and making them better. Every day I’m making them better, all day, all night, all weekend. It’s the only thing on my mind.

Speaking of Lizzy, you have to be proud of how well she’s done this year, right?

Look, she’s doing a good job; she’s driving good. I hate to say it and it sound, you know, because she’s my daughter I’m going to catch heat for it, but I’m dealing with one of the best drivers we could have right now. So that’s it—period. She’s just … focused. She listens.

I’m really proud of her. She’s gone out and she’s gotten sponsorship and, honestly, in a lot of ways she’s basically another customer for us. I happen to be the crew chief right now, but next year we’ll have a dedicated crew chief for her car and I’ll just be the engine builder. We’re actually going to revamp the whole deal. We’re getting—and I’m kind of letting the cat of the bag here—a new 2015 Dodge Dart from Bickel.