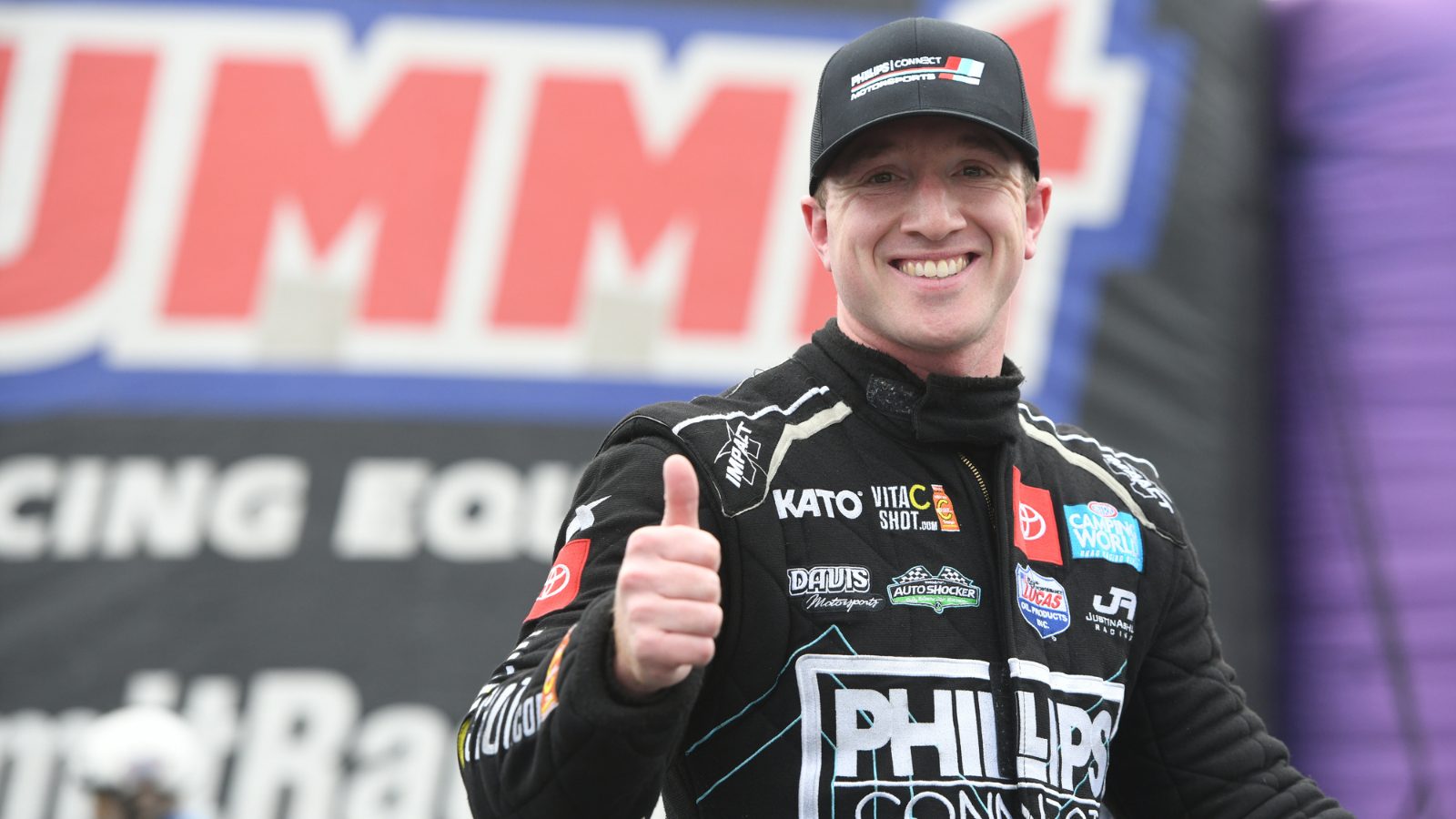 Top Fuel points leader and defending Texas Fall Nationals champion Justin Ashley can’t wait to get back to Texas Motorplex to defend his 2021 Countdown win. The rising star of the NHRA will be celebrated on Wednesday night along with the three other Texas Fall Nationals champions Ron Capps (Funny Car), Greg Anderson (Pro Stock) and Matt Smith (Pro Stock Motorcycle) during the inaugural Champions’ Dinner at the track, a ticketed gala style event that will include Ashley’s favorite meal Chicken Prima Vera. He will be one of the top stars at the Pre-Stage Fan Fest at Railyard Park in downtown Waxahachie on Thursday night for the free fan autograph event before turning all his attention to going back-to-back at the Texas Fall Nationals with the Phillips Connect Toyota Top Fuel dragster powered by Vita C Energy.

“I am very much looking forward to heading back to Texas Motorplex for the Stampede of Speed and NHRA Texas Fall Nationals,” said Ashley, who has two runner-up finishes so far in the 2022 Countdown. The events leading up to and during the race, including “The Champions’” Dinner and autograph session, are a great way to provide a first-class entertainment experience for our fans. Track owners Billy Meyer and Christie Meyer Johnson go above and beyond for all involved. This is an excellent opportunity to enjoy everything this weekend has to offer while putting our best foot forward to defend the FallNationals title.”

This year’s Countdown has been loaded with excitement already for Ashley and his Phillips Connect Toyota Top Fuel team powered by Vita C Energy. The 2020 Rookie of the Year started the playoffs in third place and with a runner-up finish at the Reading Nationals he raced to the points lead. The following week in Charlotte Ashley and Davis Motorsports recorded another runner-up and extended their lead. A quick exit two weeks ago in St. Louis didn’t hurt the four-time national event winner and he enters the Texas Fall Nationals looking to recapture his momentum.

“St. Louis was a tough weekend, but we put that behind us,” said Ashley. “The championship isn’t won by looking at the past or focusing on the future. It’s won by concentrating on the present. Right now, the present is the Fall Nationals so that is where our attention goes. This is an exciting time, and the Stampede of Speed and Texas Fall Nationals will have a real playoff atmosphere. Mike Green, Tommy DeLago, and the Phillips Connect crew are the best in the business and are ready for a good weekend.”

On Friday night at Texas Motorplex there will be $15,000 on the line for the quickest elapsed time of the second qualifying session. Conditions could be favorable for teams to post strong numbers and on top of the Motorplex bonus the Phillips Connect $30,000 first to 300 mph at the 1/8-mile bonus could be in jeopardy. Ashley, a driver and team owner, takes all the additional elements in stride when he gets inside his 11,000-horsepower land rocket.

“We want to put ourselves in the best position for success on race day by qualifying well. But we understand the importance of capitalizing on the special bonuses that are available. It’s important to our team that we are the first to go 300MPH to the 1/8-mile. Phillips Connect put the program together and we want to be the best representatives that we can be for their organization on and off the racetrack. That includes putting our Phillips Connect team in a better position to win the Camping World Top Fuel championship by having success on Sunday in Dallas.”

Over the past 11 races Ashley has a win at the Thunder Valley Nationals in Bristol, three runner-up finishes and five semifinal finishes. The Phillips Connect Toyota Top Fuel dragster has an average qualifying position of 3.4 over the past ten races with a No. 1 qualifier at the second Countdown race in Charlotte.

Ashley and his team will get four qualifying sessions during the Texas Fall Nationals over Friday and Saturday with final eliminations starting at noon CT on Sunday.