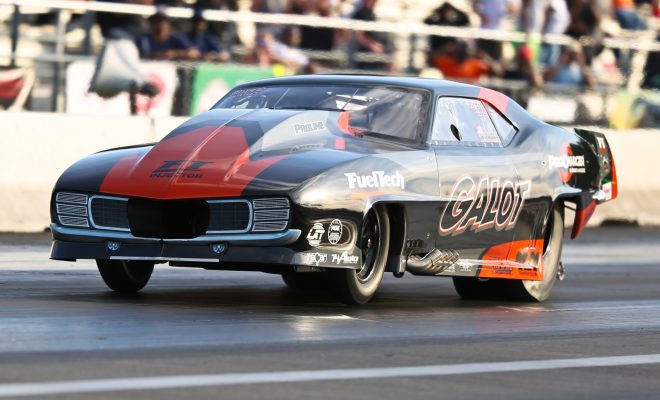 The PDRA’s Jr. Dragster classes were also contested at the North vs. South Shootout, with Ethan Steding leaving first and running a 7.921 to beat Will Creasman’s 7.973, both on 7.90 index, in the Coolshirt Systems Pro Jr. Dragster final round. A slightly quicker reaction time also helped Rowan Parlett secure the win in Classic Graphix Top Jr. Dragster, running an 8.999 on an 8.90 dial to defeat Katelyn Page’s 9.014 on an 8.94 dial.

Pro Boost has proven to be one of the most competitive classes in the PDRA this season, with any of the 16 qualified drivers capable of winning. Three different drivers have won in as many races to start the season, and that trend continued at Maryland. A first-time winner was guaranteed going into the final, as Daniel Pharris and Jason Harris lined up for an all-ProCharger final round. Pharris left the starting line first and held the lead through the eighth-mile finish line, posting a 3.715 at 207.30 in the GALOT Motorsports ’69 Camaro next to Harris’ 3.717 at 199.52.

“Even qualifying for these races is hard,” Pharris said, adding a shoutout for the crew members on the two-car GALOT team. “This stuff is tougher than NHRA. When you have 2-3 numbers separating No. 1 to 10 [in qualifying], you have to go up there ready for battle first round. A few years ago, you kind of had a couple free rounds. There’s no more of that. These guys mean business and it’s something to even win one of these. I feel like I’ve won the lottery. It’s crazy.” 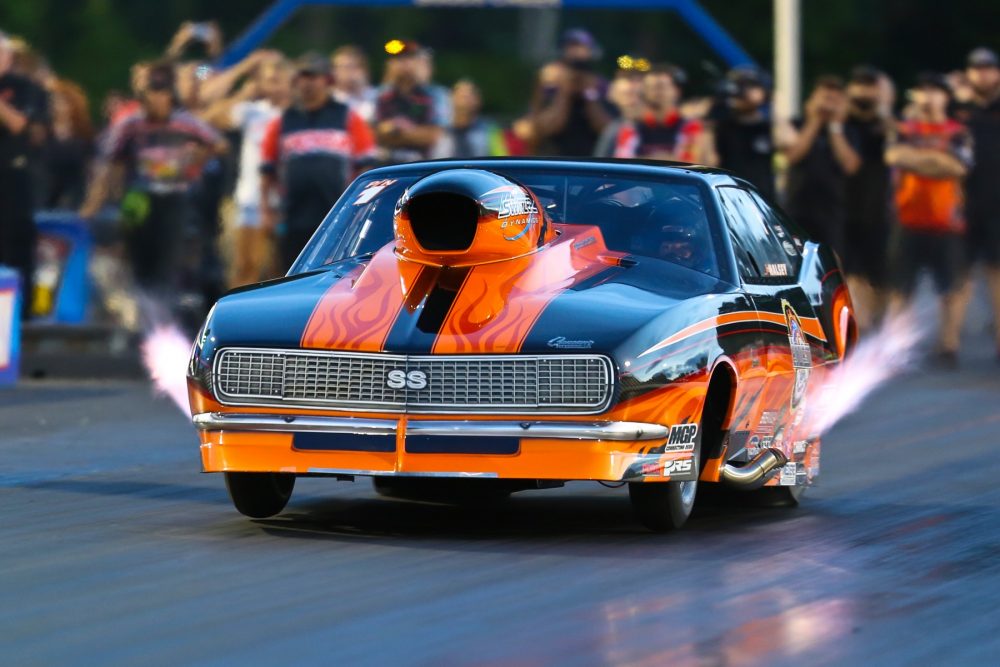 From setting quarter-mile records in the late 2000s to setting more records and winning his second Pro Nitrous world championship in 2020, Havre de Grace, Maryland’s Jim Halsey has just about seen and done it all in nitrous Pro Mod racing. But a win at Maryland International Raceway escaped him before this weekend. He changed that in the final round, busting out a 3.675 at 205.26 in his Fulton-powered “Daddy Shark” ’68 Camaro to finish ahead of Jay Cox’s 3.702 at 202.30.

“We’ve been racing here for 20-plus years off and on, and I’ve never won here or actually did very well,” said Halsey, who thanked his Brandon Switzer-led team, which includes girlfriend Cathy Crouse, Michael McMillan, Eric Davis, and Melissa Switzer. “It’s a good feeling to get the first win here. Sold a lot of T-shirts today and had a lot of people stop by and congratulate us. It’s been a great time.”

Cox, who took his Buck-powered Butner Construction “Pumpkin” ’69 Camaro to the winner’s circle at the PDRA Kentucky race in May, won first round with a 3.792 over Dane Wood’s 3.878. He improved to a 3.722 to defeat “Mountain Man” Mike Achenbach’s 3.724 in the second round. The North Carolina native stepped up again, running a 3.702 to knock out Tony Wilson’s 3.728 in Wilson’s fourth consecutive semifinal appearance. 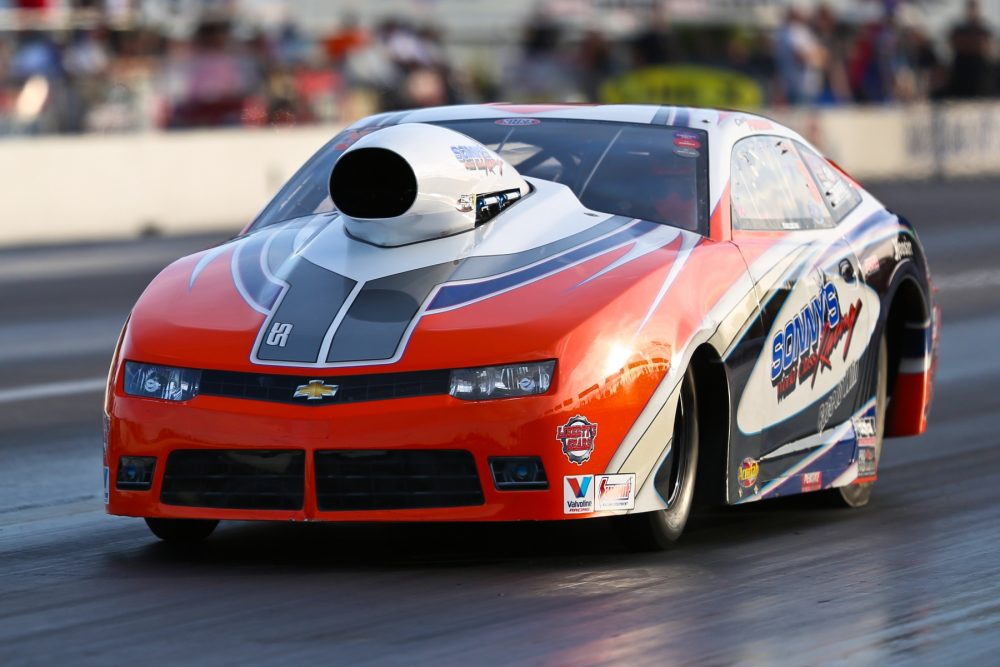 Chris Powers came into the weekend as the Extreme Pro Stock points leader with a win at the season-opening East Coast Nationals, but he had something to prove at Maryland. He lost on a holeshot in the final round at the last race, and he was determined to make up for that. The driver of the Sonny’s Racing Engines ’14 Camaro was victorious, defeating defending world champion Johnny Pluchino in the final round. The two drivers left with nearly identical reaction times, but Powers pulled away with a 4.121 at 176.03, while Pluchino slowed to a 5.25 at 96.51.

“After Norwalk, we thought we had a real good, stellar car, but I threw it away in the final,” Powers said, crediting tuner Chuck Samuel, the engine builders at Sonny’s Racing Engines, and supporters ATI Performance and S&W Performance Group. “This is the only way to get over that, to go back out and show them we’re not going to be put down and we’re going to get it done again. I can’t say enough about Johnny. He’s a super tough competitor. I wanted him to know we’re not going anywhere and we’re going to work our asses off.”

Powers, who was just three thousandths of a second from qualifying on the bump spot, bounced back in eliminations. He dodged a bullet when 2018 world champion Steven Boone went red on a 4.127 pass, while he slowed to a 7.499 to move on. He stepped up when it counted, running a 4.112 to defeat Dave Hughes and his 4.134. 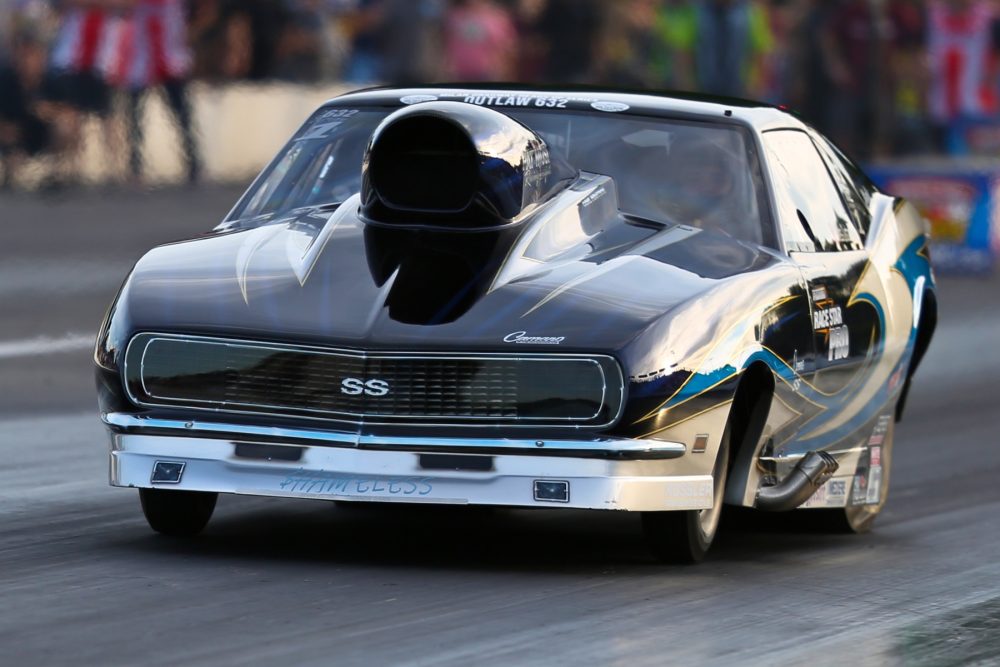 A stuck nitrous solenoid prevented Pro Outlaw 632 points leader Wes Distefano from pursuing the No. 1 qualifying spot on Friday night. He ended up third, but Distefano and his Troy Russell-led $hameless Racing team vowed to step up for eliminations. They did just that, with Distefano unloading a 4.169 at 170.41 on two-time world champion Dillon Voss in the final round. Voss recorded his second-quickest pass of the day, a 4.207 at 169.10, but it wasn’t enough to get around Distefano’s Musi-powered ’68 Camaro.

“We knew that qualifying No. 3, though that wasn’t our goal, put us on the same side of the ladder as [Daryl] Stewart,” said Distefano, who leads Stewart in the championship standings. “We knew we’d be meeting before the finals and that would be a pivotal race for the points. Being able to get past that round and knowing that we had a hot rod at that point, it really meant a lot going into the final. Leaving this race, I think we’ve got a real good lead in the points and a real good chance [at another championship]. We just have to fight our way through the rest of the season and have a lot of fun.” 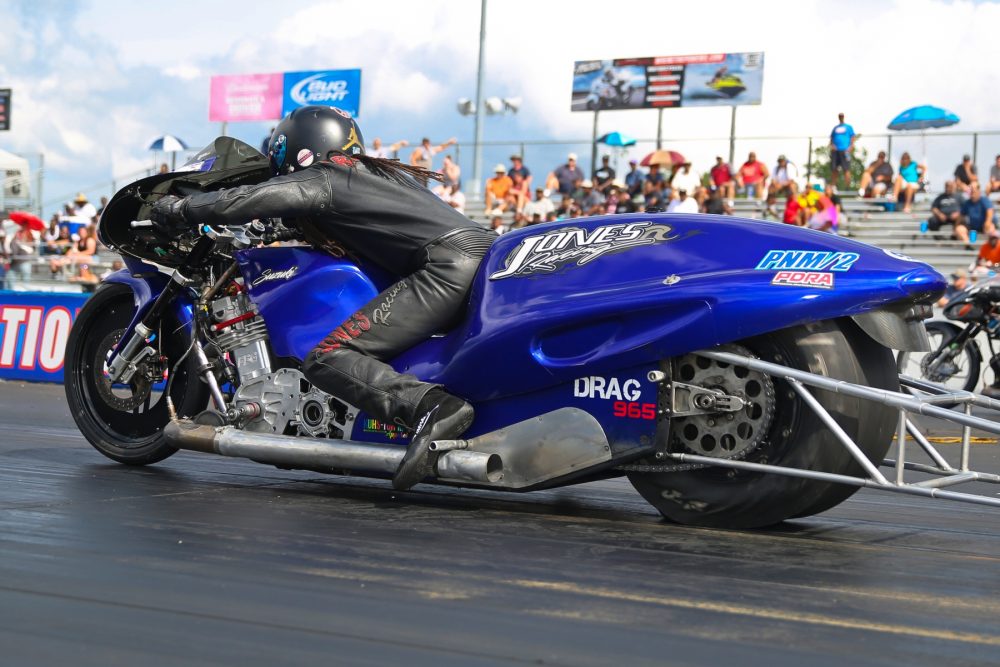 Second-generation Pro Nitrous Motorcycle rider Chris Garner-Jones scored an emotional win – his first in PDRA competition since winning at Maryland in 2015 – when he defeated multi-time winner Brad McCoy in the final round. Jones, who lost his father and teammate T.T. Jones to cancer a year ago, recorded a 4.007 at 176.67 aboard his T.T. Jones Racing Hayabusa to knock out McCoy and his 4.044 at 174.93.

“It’s been so long since I’ve had a win at the PDRA,” Garner-Jones said. “Seeing that Father’s Day was a week ago, this one means a lot. Happy heavenly Father’s Day again to my dad. Big thank you to my little brother [William]. He tuned his ass off this weekend. Paul Gast helped us out a little bit and got our clutch set up. After that, we’ve been running fantastic.”

Racing out of the No. 2 spot, McCoy defeated Mohammed Alawad’s 4.145 with a 4.092. He coupled a slightly quicker reaction time and a 4.042 to knock down defending world champion Travis Davis and his 4.043 to move on to the final round. 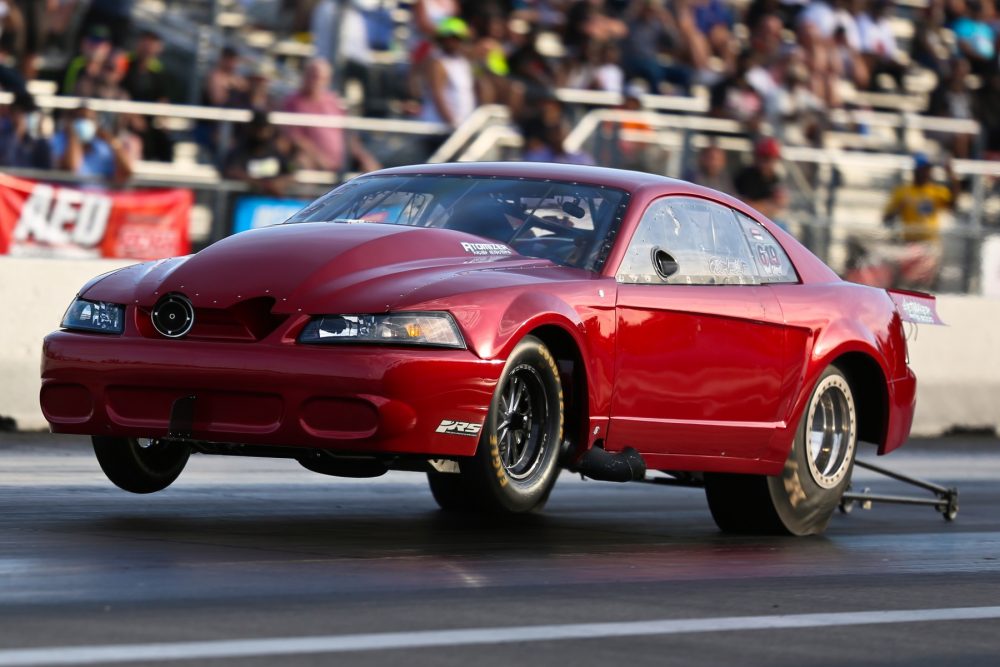 Pro Street low qualifier Jesse Lambert admittedly struggled in prerace testing, but his No. 1 qualifying effort indicated he and his Virginia-based team worked out any issues with the turbocharged ’04 Mustang. Lambert’s performance in eliminations confirmed that, as he earned his second win in three races. In the final round, he trailed Ty Kasper out of the gate, but he pulled out a 4.065 at 202.12 to score the win. Kasper was right behind him – literally – with a 4.099 at 197.36.

“To be honest with you, the driver hasn’t been doing his job today,” Lambert said, thanking Joe Newsham at J&E Automotive for engine work and Mike and John McGee at Cutaway Creations for fabrication work that led to the win. “I missed the tree. It’s on me, but we got a good car. The margin of victory was .003 at the stripe. I drove it through deep just to make sure, and our win light came on. It’s been a long weekend, and we worked for it, but it was worth it. This win made it all worth it.”

By qualifying No. 1 on Friday night, Lambert earned a first-round bye run, which he used to test the limits, running a 5.239. He left behind Nick Schroeder in their second-round matchup, but Lambert stepped up to a 4.058 at 202.58 to drive around Schroeder’s 4.176.

Kasper, the No. 2 qualifier in his turbocharged Victus Baseball Bats/Kasper Performance Edge ’05 Mustang, posted a 4.205 to beat Bill Riddle in the first round. A quick pedal job in the semifinals resulted in a 4.292-second win over Chris Cadotto, who ran 4.823.

Bob Bauer Jr.’s Galaxy Auto Place ’69 Camaro might look like a Pro Boost car, but the Elma, New York-based driver proved the roots-blown Hemi combo also makes for a consistent bracket car. He qualified No. 14 in the Elite Top Sportsman field and worked his way through three rounds to meet up with points leader Tim Molnar in the final round. Bauer grabbed a holeshot advantage, but it was his 4.017 on a 4.01 dial that secured the win over Molnar and his competitive 3.877 at 3.86 in his nitrous-fed ’68 Camaro.

Points leader Nick Meloni made his way to his second consecutive Top Sportsman 32 final round in his TT Motorsports ’69 Camaro, but Virginia’s Robbie Crenshaw denied Meloni his second consecutive win. Crenshaw in his Albert-powered Abilene Motor Express ’89 Cutlass grabbed a sizable starting line advantage and dropped a 4.294 on a 4.29 dial-in. Meloni slowed to an 8.203 on his 4.28 in the runner-up effort.

The Elite Top Dragster final round featured a rematch from the most recent PDRA race in Ohio, as No. 2 qualifier Michael White and No. 1 qualifier Pete Maduri squared off yet again. Maduri won in Ohio, but White evened the score in Maryland. White left the starting line first in his ProCharged ’15 Maddox dragster and posted a 3.838 on a 3.79 dial-in to get the win and extend his points lead over Maduri. Maduri’s K100/Dynabrade ’17 Chrome-Worx dragster carried him to a 3.854 on a 3.81 dial.

North Carolina driver TG Paschal continued his run of dominance in Top Dragster 32. After winning two of the first three races of the season, Paschal laid down a 4.284 on a 4.27 dial-in in his ’12 Racetech dragster in the final round to defeat Brooke Hall Gary’s 4.384 on a 4.36 dial. Paschal’s third win in four races further extended the points lead he had going into the weekend.

The PDRA and its racers will have a couple weeks off before returning to Virginia Motorsports Park for the Summer Shootout presented by Ty-Drive, July 15-17.