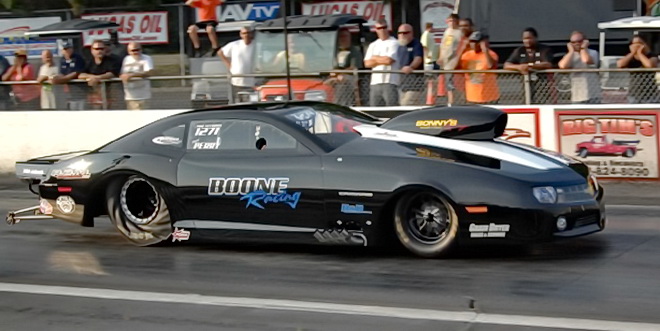 From the drivers who compete in the “Often Imitated, Never Duplicated” Big Dog Shootout at North Carolina’s historic Piedmont Dragway, four remain with a mathematical chance at winning the points fund for the 2014 season. With only one Big Dog race left on the schedule, Todd Tutterow, Chris Rini, Danny Perry (above) and Travis Harvey will battle it out Oct. 2, to determine this year’s champion.

For the Sep. 4, event Tutterow opted to attend the PDRA Dragstock event at nearby Rockingham Dragway that weekend, leaving  Rini, Perry and Harvey to occupy three of the top five spots in qualifying. With 10 cars on the property, there was no guarantee as to entry into the field of eight, ultimately led by Rini in the number-one spot with a 3.846 pass at more than 195 mph. Close behind was Perry in second at 3.87 with Keith Floyd following at 3.89, Jay Cox fourth at 3.899, and Harvey fifth at 3.94 seconds. Ronnie Gardner at 4.05 placed sixth, Dan Ferguson at 4.14 was seventh and Dane Wood with a 4.60 rounded out the qualified field.

First-round eliminations held few surprises as low ET and top speed both went to Rini as he disposed of Wood with a 3.85 at 194.91-mph pass. Other early winners included Perry, Gardner and Cox. In the round two,  the “Northern Assasin” Rini ran another 3.85 as Cox couldn’t make the call and Perry ran 4.11 to narrowly defeat Gardner’s 4.15 effort. 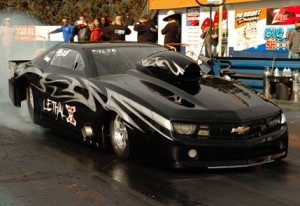 The final was a bit anticlimactic as Perry went a 4.25 at only 155 mph to defeat Rini’s slower 4.47 at 169 mph. As a result, the points heading into October’s final version have Harvey with just a one-point lead over Rini, who is only two points ahead of Tutterow, with Perry only five points further back.

The Renegade eliminator in September had nine cars show up and it was an all-Nesbitt Racing Engines qualifying show with Brett Nesbitt the top qualifier at 4.123 and John Lassiter second at 4.141 seconds. Tim Lawrence was third and Wayne Hawkins filled out the top four spots. After making it through the first round, Nesbitt lost to Brian Schrader and Lawrence lost to Dennis Bennett, who made it into the show when Lassiter had electrical gremlins show up again. This set the final between Shrader and Bennett, where Schrader used a 4.253 to defeat an off pace “Dennis the Menace.”