John Force Racing and PEAK announced Nov. 1, a new agreement with its PEAK Antifreeze + Coolant and BlueDEF brands serving as a primary sponsor for John Force during the 2015 NHRA Mello Yello Drag Racing Series and beyond.

Under the agreement, PEAK Antifreeze + Coolant and BlueDEF will be the primary sponsor of John Force’s Funny Car for a majority in the 2015 season, as well as continuing as a major associate sponsor on Robert Hight, Courtney Force and Brittany Force’s cars.

“I’m committed to continuing to lead a championship team and PEAK has proven a similar commitment to the NHRA. Thanks to PEAK Antifreeze + Coolant, I won’t be hanging up my hat from this sport anytime soon,” said John Force, 16-time NHRA Funny Car champion and CEO of John Force Racing, Inc.

“Not only does PEAK provide high quality automotive products for American families like mine, but they’ve proved to be a valued partner on and off the track. I’m so grateful that they’re supporting me, my team and all the fans out there who love drag racing.” 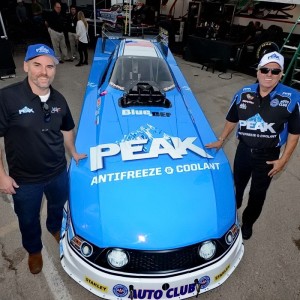 PEAK’s expanded relationship with the 18-time NHRA Mello Yello championship team builds on its status as a major associate sponsor of all three of John Force Racing’s Funny Cars and the JFR Top Fuel Dragster since February 2014.

“We’re honored to be behind John Force and JFR for the 2015 season and beyond,” said Bryan Emrich, Chief Marketing Officer for Old World Industries, which includes the PEAK Antifreeze + Coolant and BlueDEF brands.

“PEAK chooses partners that exude the same passion and personal character of hard work that our company upholds.  After working with John over the past year, it was clear that he and his family are a great fit for our company, allowing us to make the decision to step up and ensure John keeps racing for many more years to come.

“He is an icon in this sport and a fan favorite and we are lucky to be tied with such a great championship winning organization.”