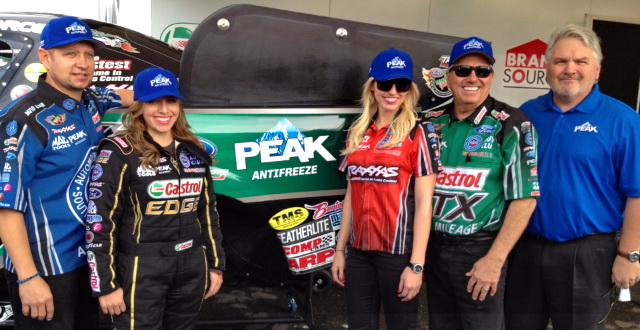 The multi-year sponsorship agreement will include PEAK Antifreeze and BlueDEF Diesel Exhaust Fluid branding on all three JFR Funny Cars and the JFR Top Fuel Dragster, as well as team uniforms and haulers.

“We are excited to add PEAK and BlueDEF to the John Force Racing team. We pride ourselves on treating all of our sponsors like family for more than three decades. Bringing PEAK and BlueDEF into the family will make us stronger in 2014 and for many years to come. We have had a lot of conversations about the future and I know this will be a great deal for everyone,” said John Force, 16-time NHRA Funny Car champion and CEO of John Force Racing, Inc.

PEAK has been actively involved in motorsports for more than 30 years, showcasing the excellence and competitive quality of its products through the NHRA, NASCAR, and other motorsports series important to its customers.

“We’re proud to expand our support of the NHRA and its fans through our new relationship with John Force Racing,” said Bryan Emrich, Chief Marketing Officer for Old World Industries, which includes PEAK and BlueDEF brands.

“Partnering with JFR, a respected organization with a history of success, was a natural fit for PEAK, BlueDEF and our family of automotive products. We’re looking forward to a longstanding, winning relationship together.”