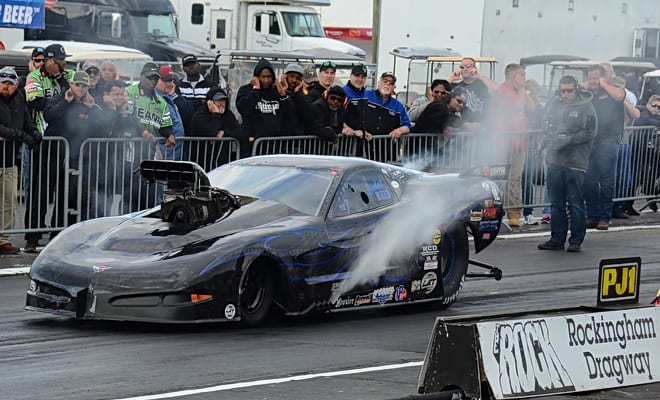 After posting a 3.65 pass at 211.33 mph, Pro Extreme driver Wes Jones went for a wild ride at the end of his third qualifying attempt. Running in the left lane against Mike Recchia, Jones drifted over close to the wall, then crossed the track just after the eighth-mile finish line to strike the right wall hard with the front right corner of his ’41 Willys. Fortunately, Recchia had engine troubles and had already shut down early as Jones’ car bounced back across the shutdown lanes to sideswipe the left wall before rolling to a stop. Jones was quickly extricated from the wreck and was walking and speaking with PDRA and track emergency workers before the decision was reached to transport him to a local hospital for x-rays and observation. 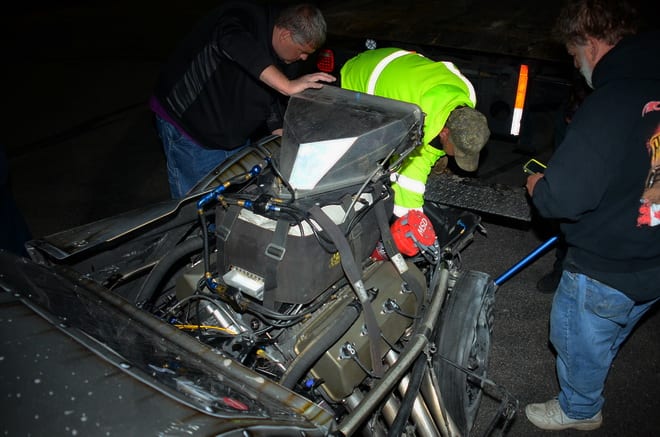 The Pro Boost final from Tulsa started with a little extra drama as the supercharged engine in Melanie Salemi’s ’68 Firebird (left lane) failed to start even as Kevin Rivenbark completed his burnout, then waited patiently at the line as Salemi’s crew struggled valiantly to fire their motor. Just as it appeared Rivenbark would make a solo pass to the win, the Firebird roared to life, Salemi performed a very short burnout without even crossing the star line, and she even staged first. Rivenbark left first with a .039 light, though, then ran 3.761 at 200.02 to deny Salemi (3.846/192.85) her second-straight win at Rockingham after winning the PDRA event there last fall.

Driving the same twin-turbo’d 2016 Corvette that Kevin Fiscus drove to an unofficial Pro Extreme record of 231 mph earlier in the week during testing at the brand-new GALOT Motorsports Park, Jose Gonzales was fastest after two rounds of PX qualifying at Rockingham, placing sixth with a 3.594 pass at 224.55 mph.

The red light tells the story for Mike Recchia (far lane) in his weather-postponed semi race from Tulsa against reigning PDRA Pro Extreme champion Jason Scruggs. Regardless, Scruggs ran 3.498 at 222.44 mph to take over the top qualifying spot and earn the right to face Brandon Snider in the delayed Tulsa final. After his scheduled opponent, Khalid al Faraei, opted out of the Rockingham event, Snider ran an uncontested 3.555 at a career-best 219.79 to place third behind Scruggs and Wesley Jones.

During round two of qualifying for the PDRA Spring Nationals in Rockingham, NC, the semi-finals were simultaneously run from last month’s weather-postponed PDRA event in Tulsa, OK. Travis Harvey (not shown) had a solo pass to the final since his scheduled opponent, Stevie Jackson, broke on the line in Oklahoma, but he left nothing on the table as he ran 3.743 at exactly 200 mph to take over the number-one spot for the Rockingham race.
The second semi provided a great pairing of Jay Cox (near lane) versus Tommy Franklin. After taking a .019 lead off the start and going 3.747 at dead on 203 mph to qualify number two, Franklin beat the 3.758 at 199.02 by Cox. Harvey has lane choice for the final. 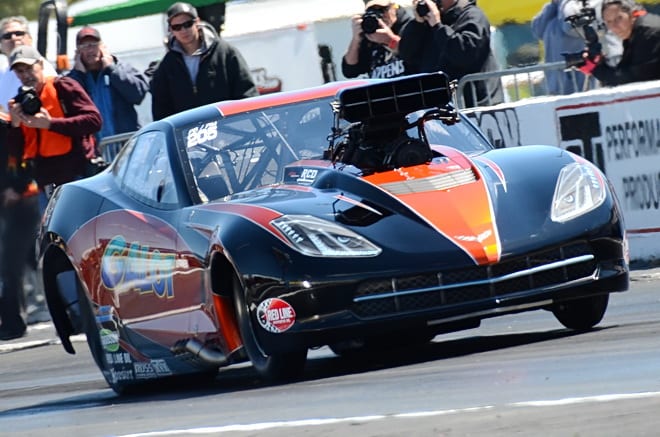 Kevin Rivenbark improved his number-one qualifying time to 3.770 at 199.70 mph in his semi-final-from-Tulsa win during round two of Pro Boost qualifying at Rockingham. He will have lane choice over Melanie Salemi, who ran 3.888 at 189.42 in beating Alan Pittman in the other semi postponed from last month in Tulsa. Salemi will be going after her second-straight PDRA win at Rockingham after winning the Pro Boost title there last fall.

Only a great driving job by Danny Lowry saved his twin-turbocharged ’67 Mustang from any body damage after a transmission fitting let loose on his launch for round one of Pro Extreme qualifying.