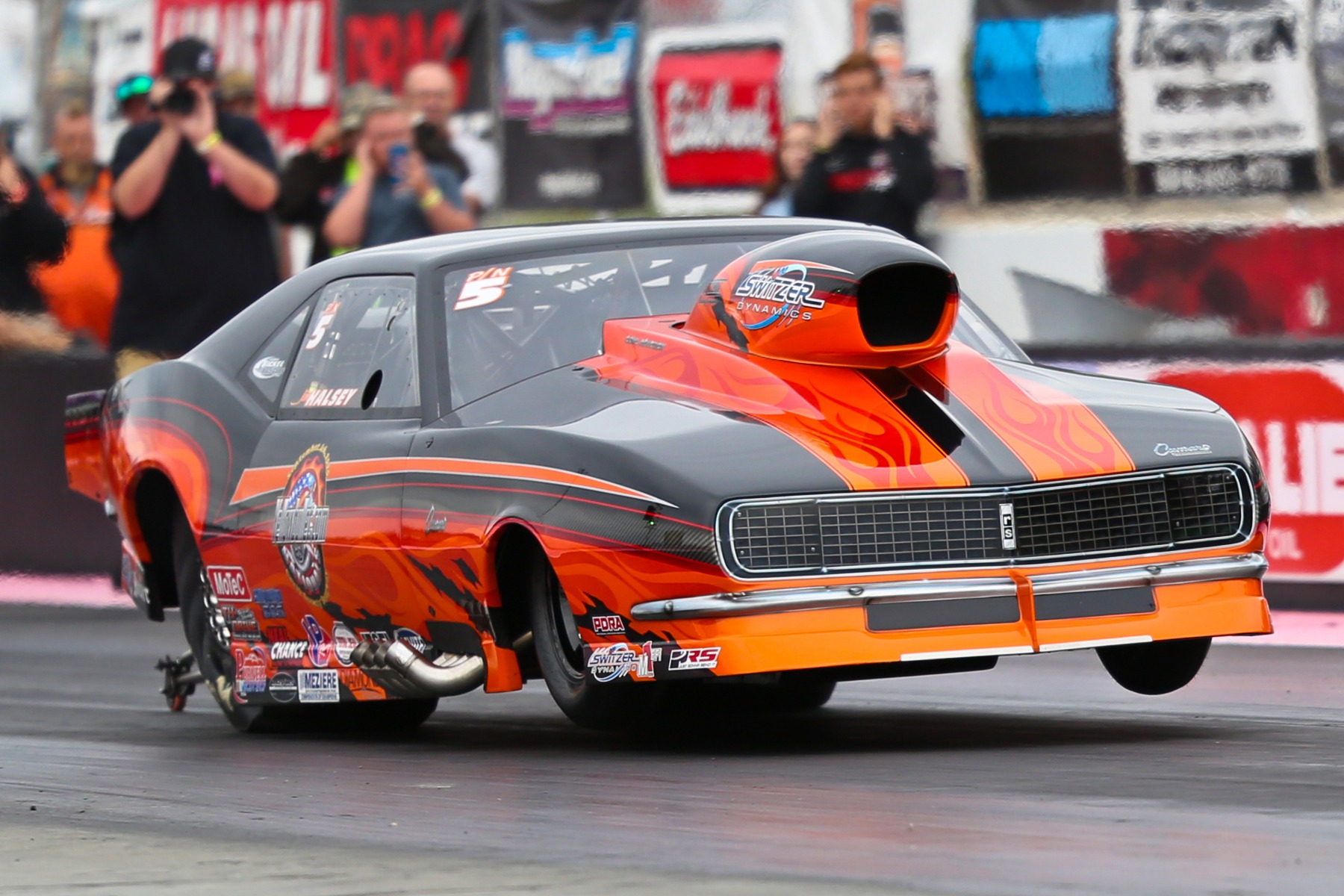 The PDRA is back in action at the Carolina Showdown presented by ProCharger at Darlington Dragway. It’s the second race of the now-seven-race season, following the East Coast Nationals presented by FuelTech at GALOT Motorsports Park in late May.

PDRA announced earlier this week that a limited number of spectators will be allowed to attend this race. Tickets are available here. Fans watching from afar can tune in to the official event livestream via SpeedVideo.

Stay tuned to this page for qualifying results, news and more.

Pro Nitrous Motorcycle Q3 is rolling through the water box, but we’re off to the pits to start talking to the low qualifiers. Check back later this evening for the full Friday qualifying recap.

A couple big moves to close out Pro Nitrous qualifying. First, Chris Rini records a 3.693. Then, Tommy Franklin is shut off on the starting line after sparks were spotted coming out of the rear of his car on the burnout. He was primed to improve on his 3.67 from Q2. Jim Halsey ended up firing off a 3.664 to qualify No. 1, followed by Franklin and Rini. Full sheet coming soon. 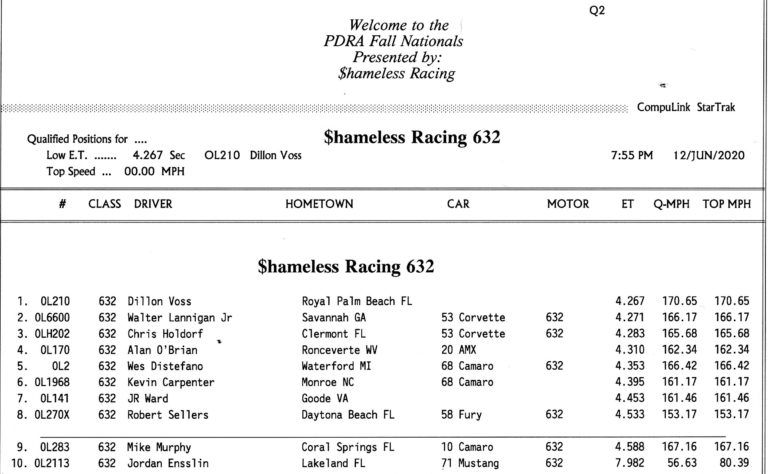 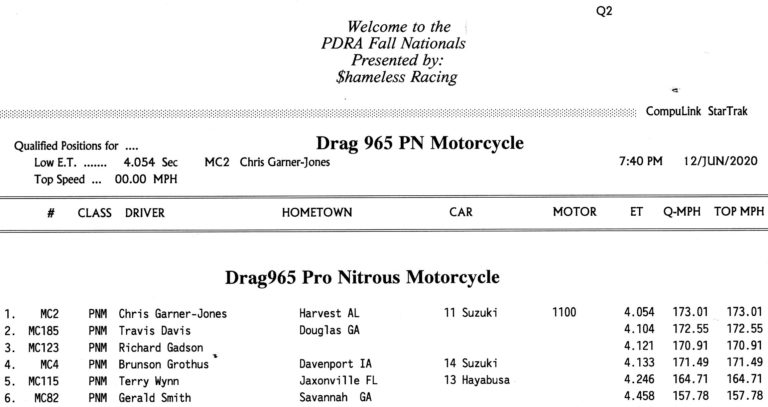 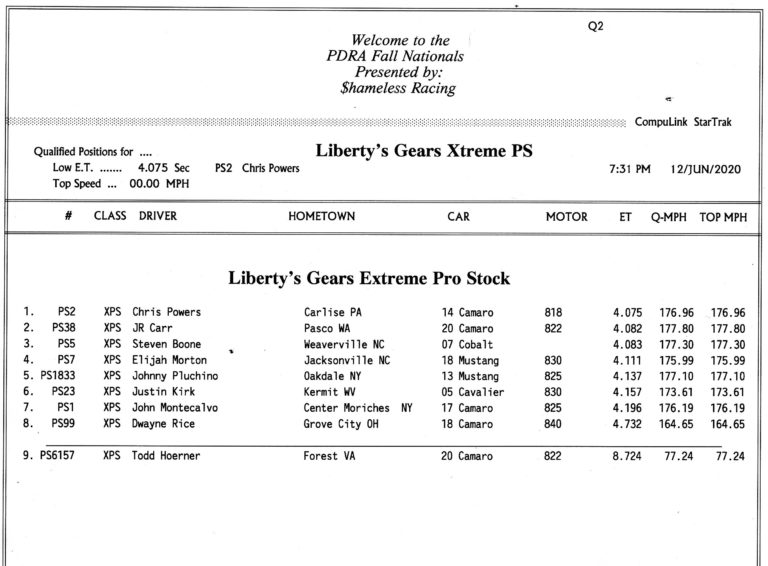 The ProCharger-boosted cars really stepped up in this session. Jason Harris (3.681), John Strickland (3.691) and Randy Weatherford (3.693) all improved to set the new top 3 going into the third and final session. 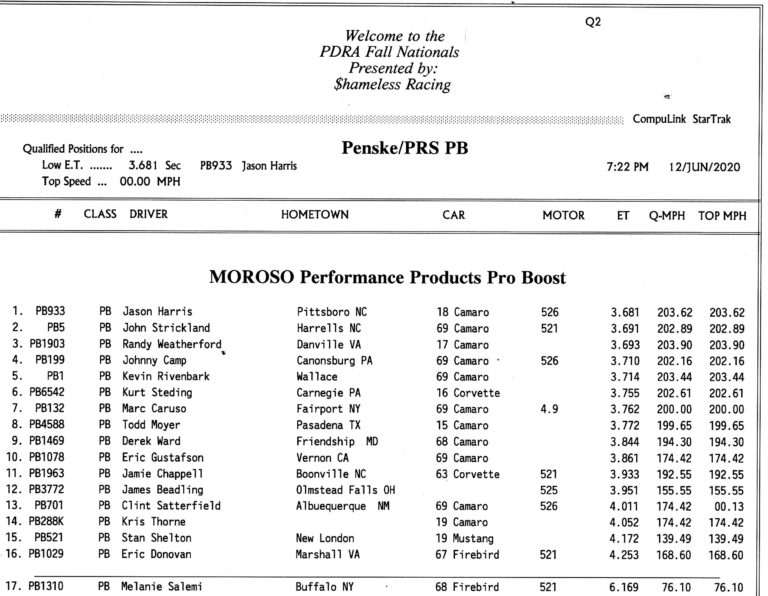 Two-time world champion Tommy Franklin absolutely dropped a bomb on the class with a 3.675 to jump to the top of the qualifying order to end the session. He went around Jay Cox, who laid down a 3.722 one pair prior to move past Jim Halsey’s 3.724 from the first session. How about Pro Modified legend Charles Carpenter throwing down a 3.749 in his 908-powered ’68 Camaro to sit in the No. 4 spot? 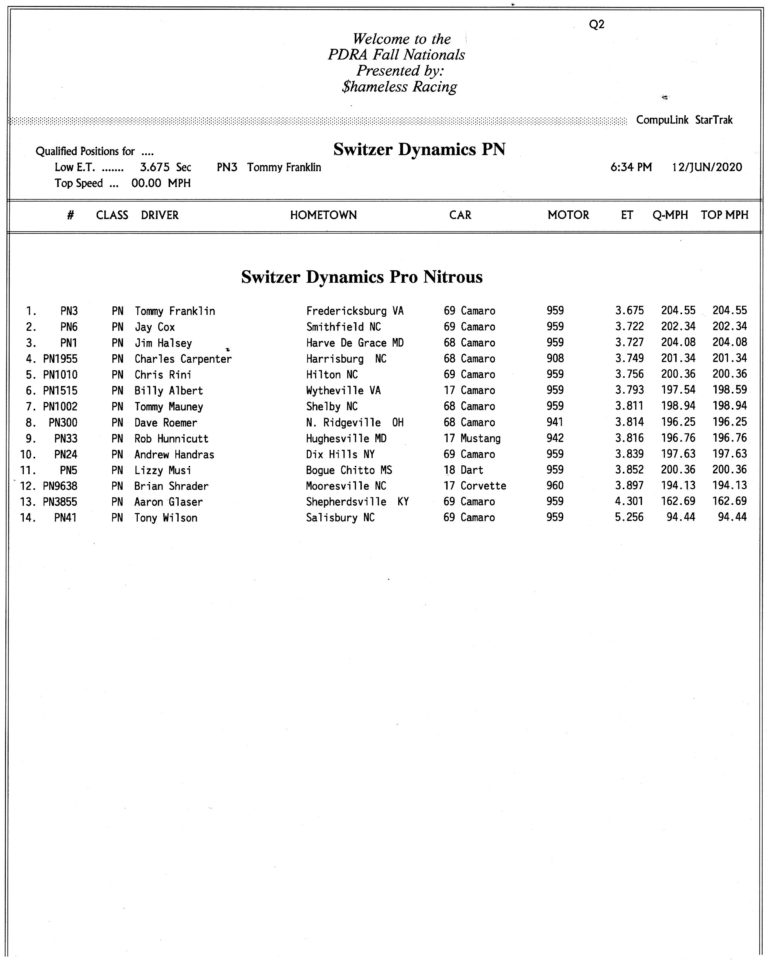 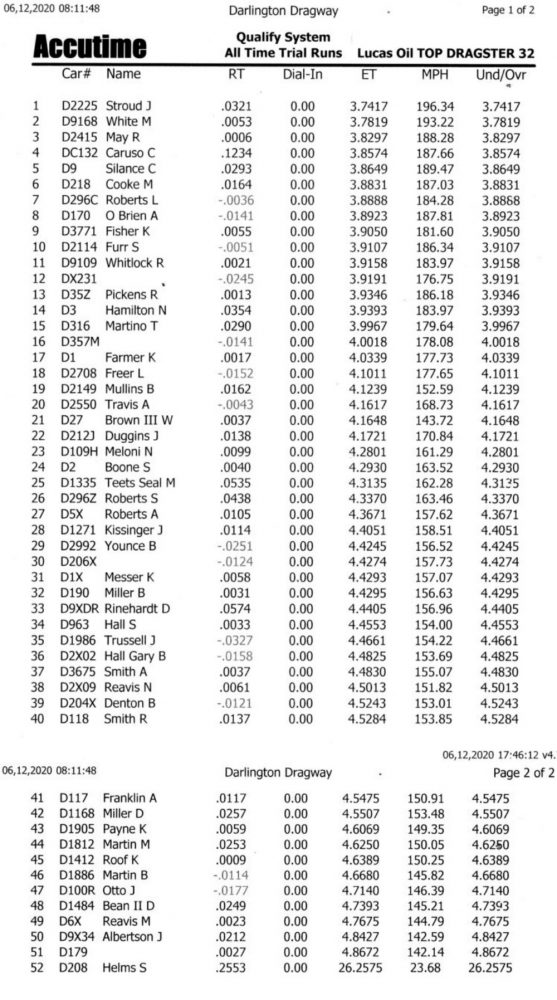 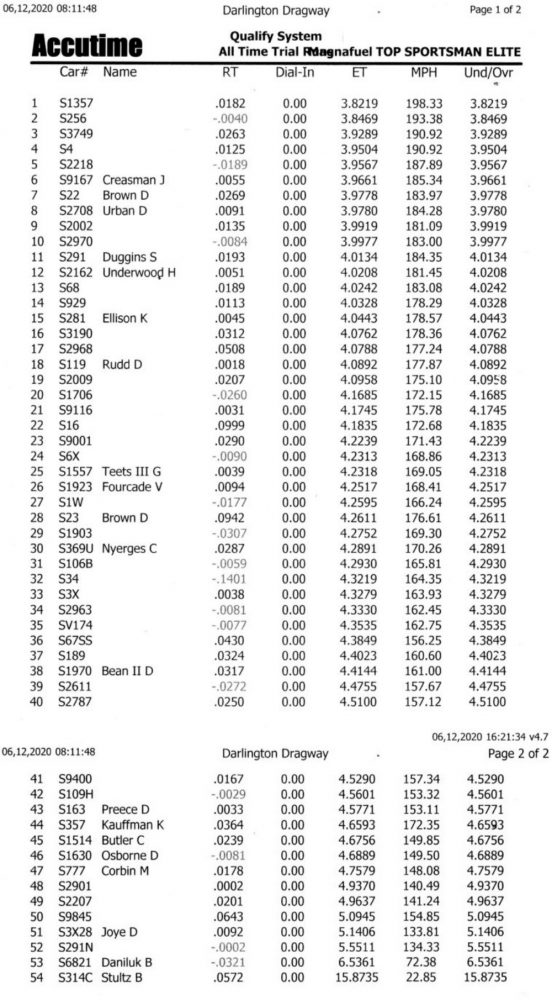 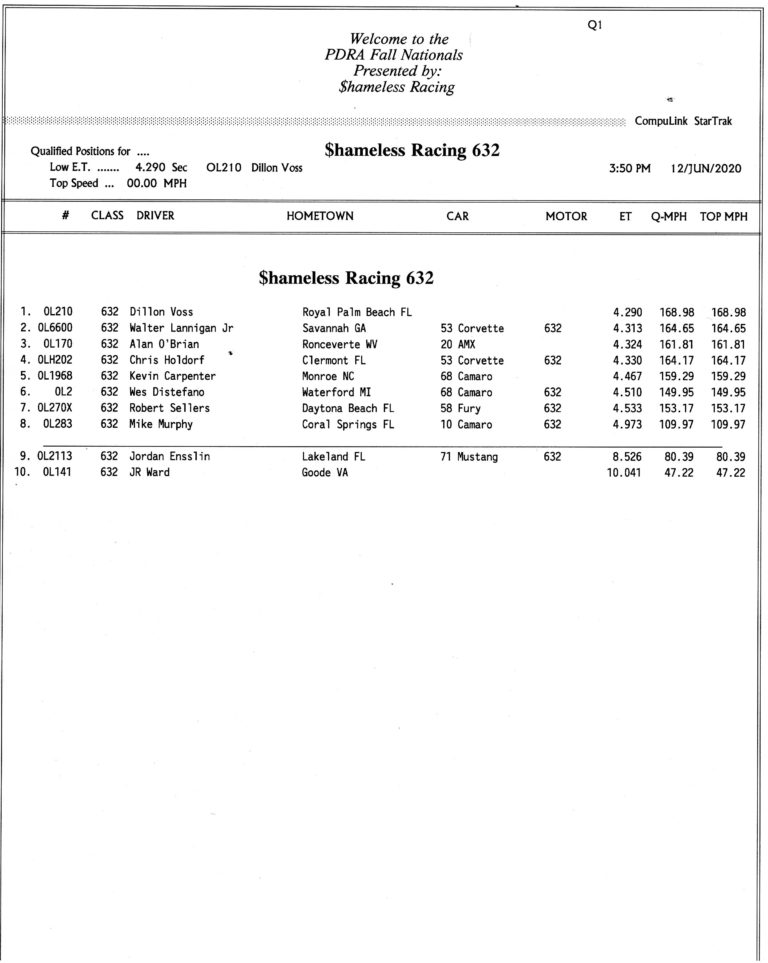 Really solid 4.079 by Chris Garner-Jones to qualify No. 1 in Pro Nitrous Motorcycle. Richard Gadson (4.121) and Brunson Grothus (4.217) were second- and third-best out of the six bikes that ran. 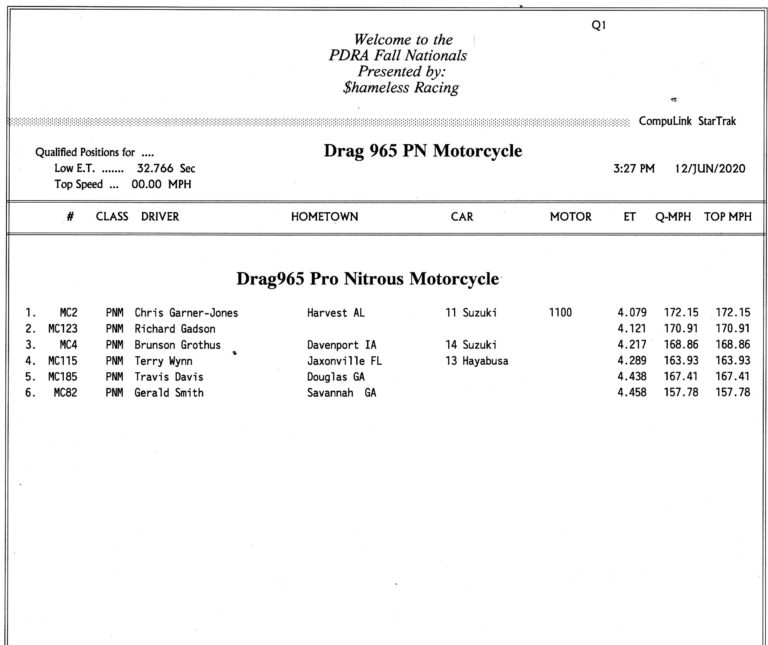 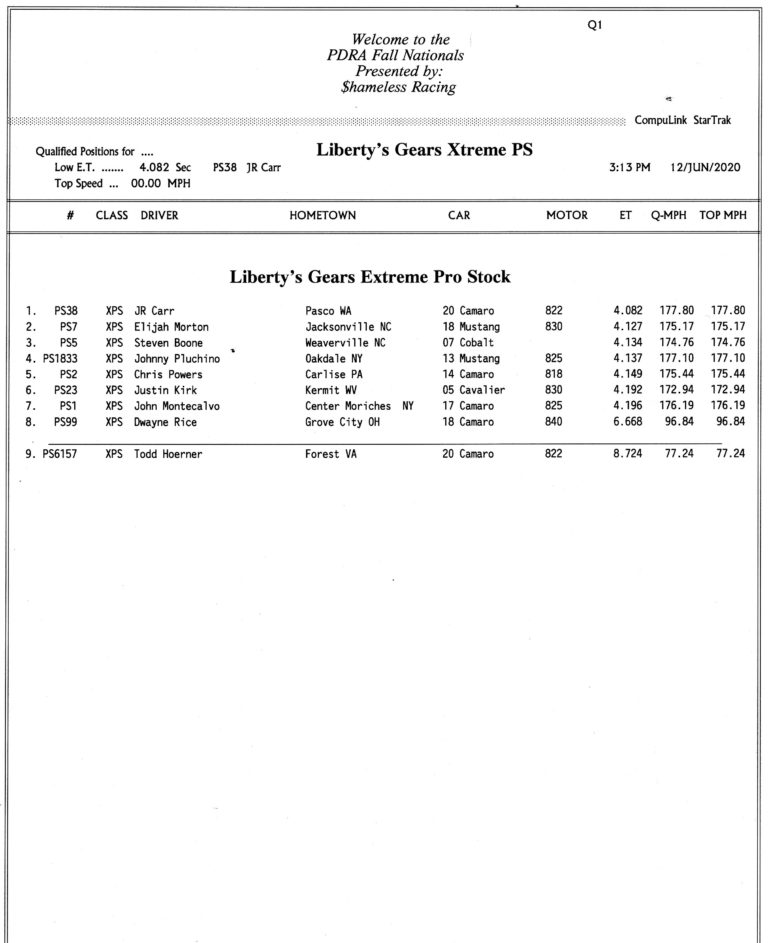 Johnny Camp, new to Pro Boost after switching from Pro Nitrous over the winter, shoots to the top of the Pro Boost qualifying order with his 3.71. John Strickland (3.724) and Randy Weatherford (3.73) round out the top 3. 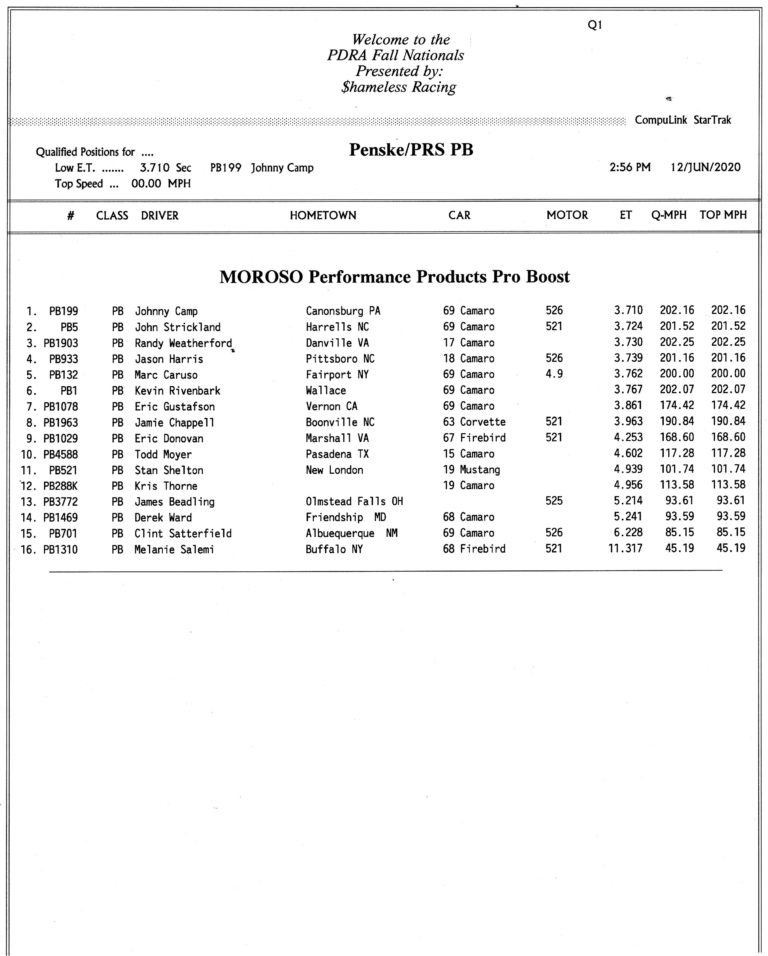 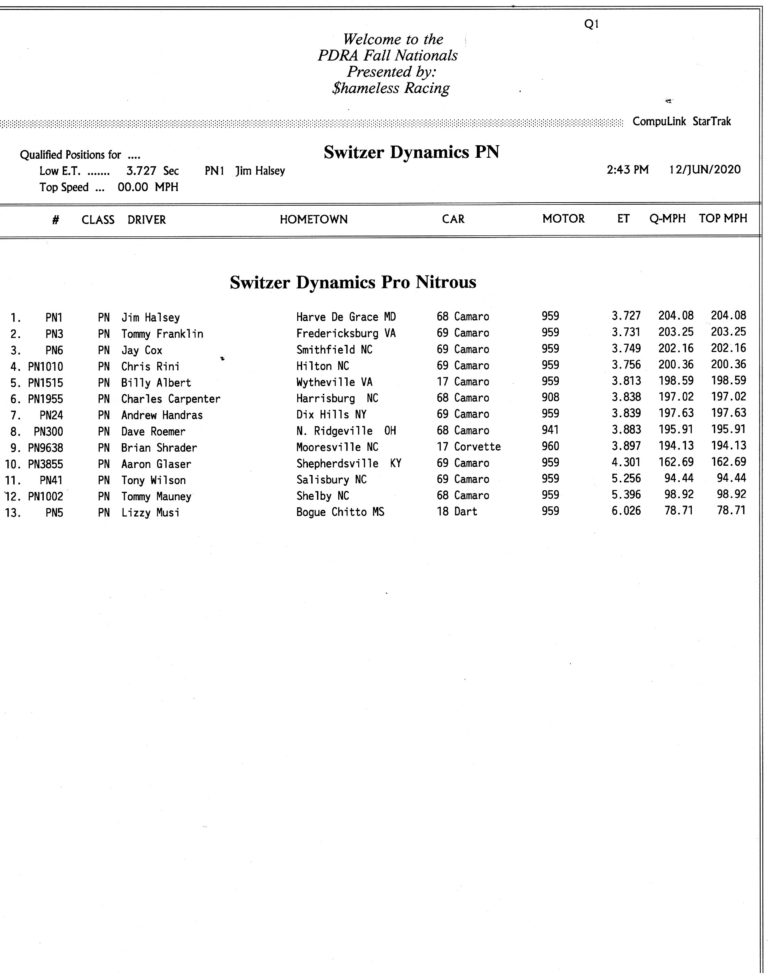 Pro Nitrous to the Lanes

Pro Nitrous cars have been called to the lanes for the first pro qualifying session. Pro Boost, Extreme Pro Stock, Pro Nitrous Motorcycle and Pro Outlaw 632 will follow in behind Pro Nitrous. 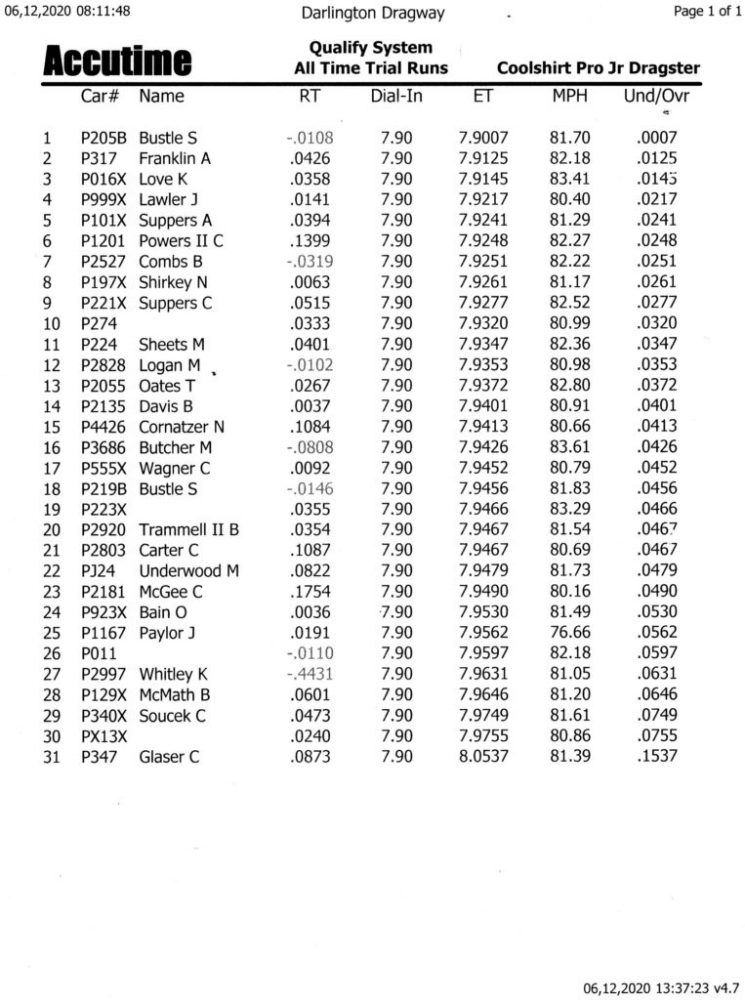 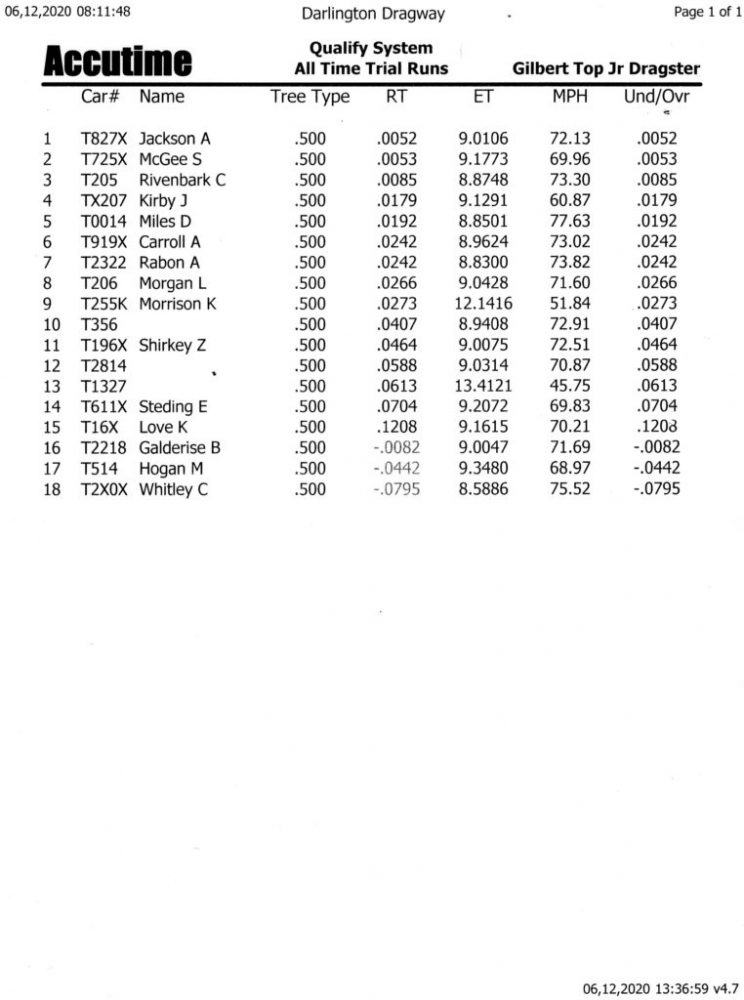 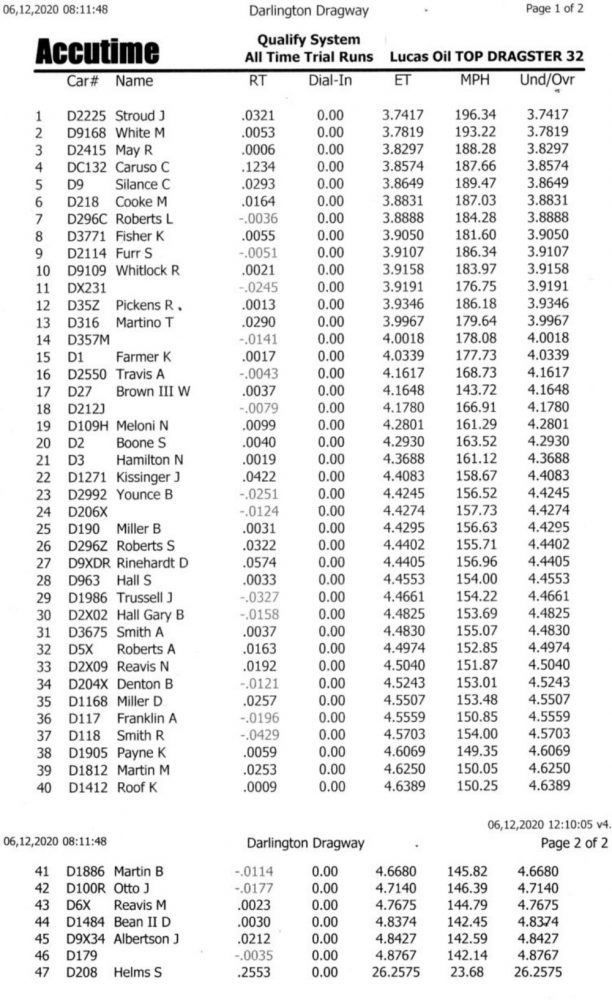 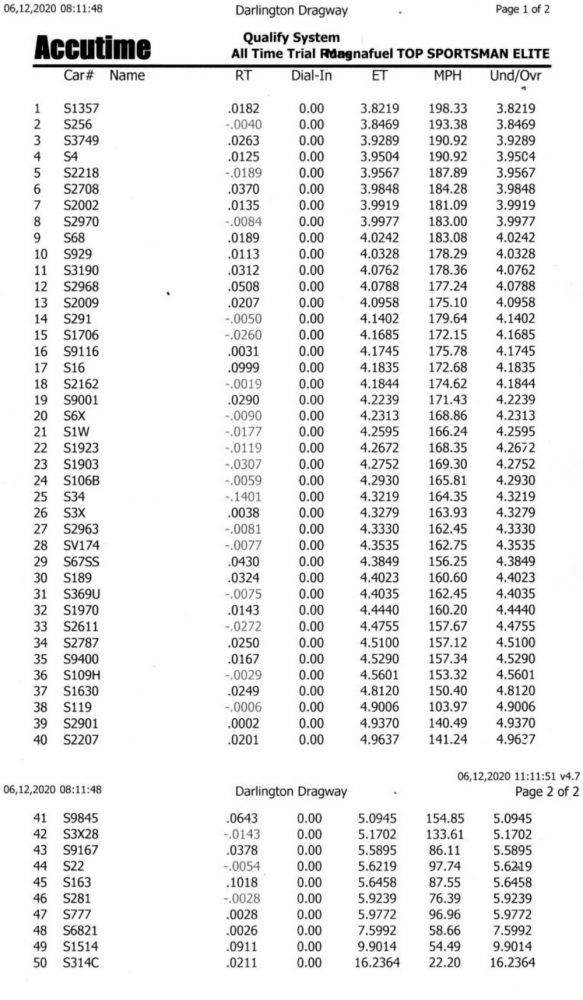 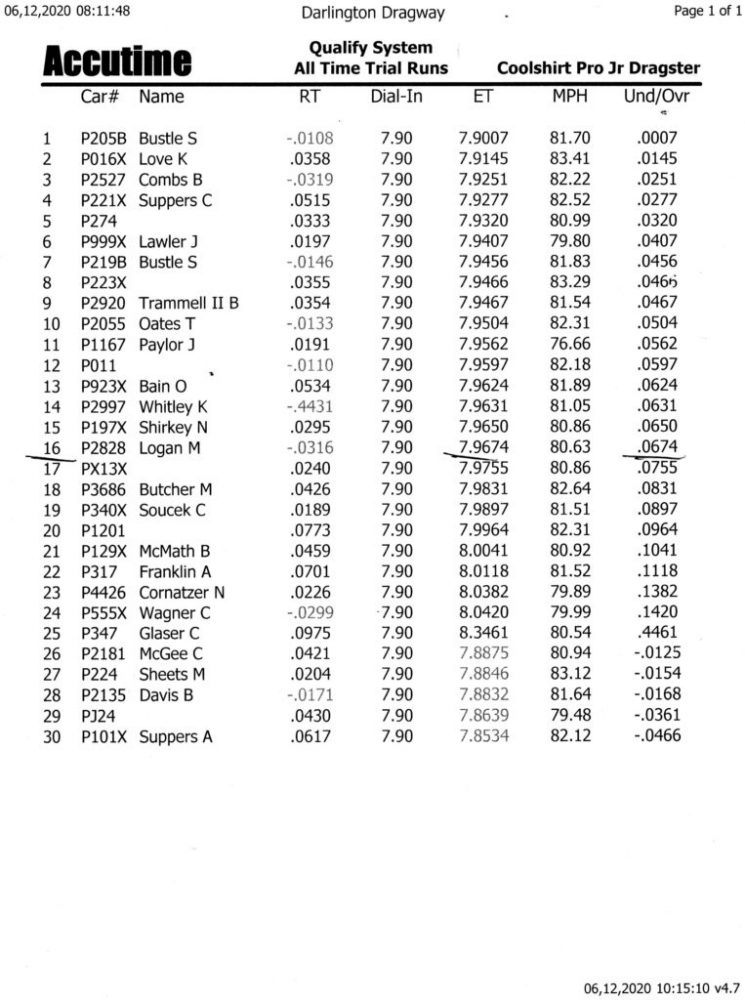 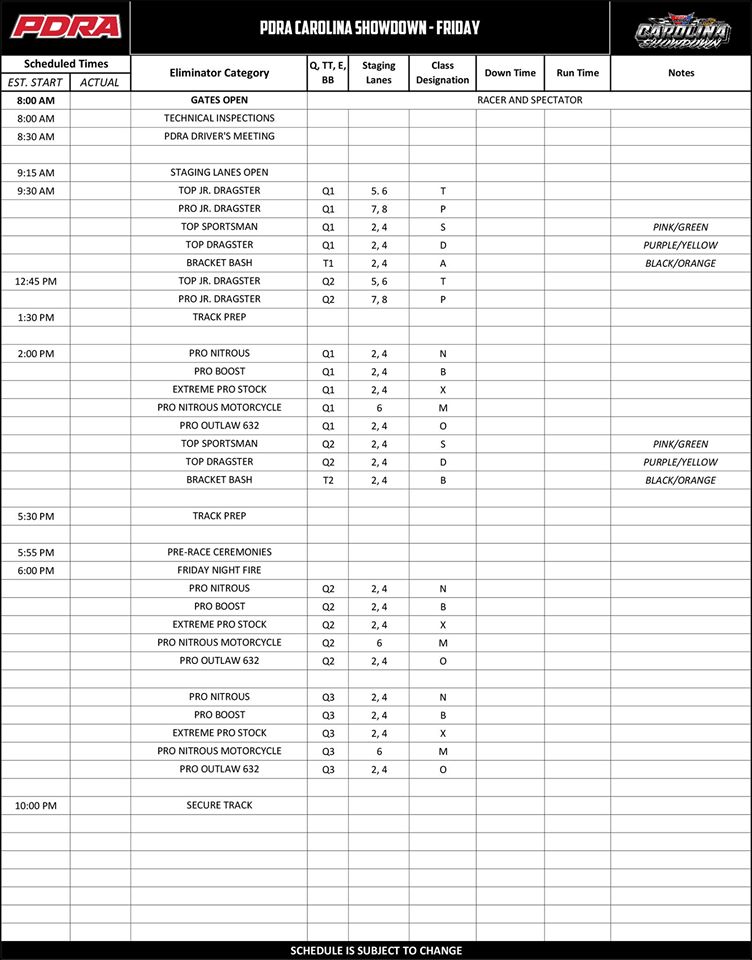