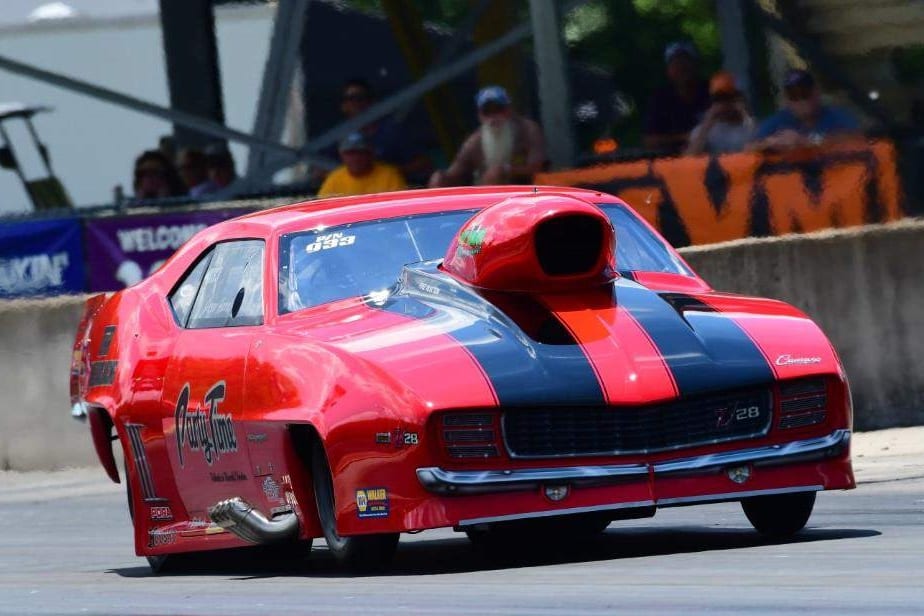 As the Professional Drag Racers Association (PDRA) enters the halfway point in its eight-race season at this weekend’s PDRA Firecracker Nationals at Virginia Motorsports Park, 2014 Switzer Dynamics Pro Nitrous presented by MoTeC world champion Jason Harris finds himself back in a familiar position: leading the points ahead of a stacked field.

“It feels good to be back in race-winning form,” said Harris, who was runner-up at the season opener and won the most recent PDRA race in Martin, Mich. “It’s been a challenge the last couple years. I came off the championship year with a lot of obligations to sponsors and I had a lot of weight on my back trying to continue winning as many races as I did that season. We experimented the last couple years and tried a couple different programs. I think this is the first year I started the season with what I ended the year with, and I think that’s a big factor. A lot of these drivers – Tommy (Franklin), Jay (Cox) and Lizzy (Musi) – have hundreds of runs on the same combination, whereas I’m really just now getting a hold of my combination.”

Harris and his Musi-powered “Party Time” ’69 Camaro were strong in qualifying and eliminations at the PDRA Summer Drags at Martin earlier this month, qualifying No. 1 and defeating Jim Halsey in the final round. Warm conditions were prevalent at Martin, leading Harris to believe he has a good chance of continued success at the rest of the summer races.

“It’s a battle of attrition from here on out,” Harris said. “The tracks are going to be hot and the air will be bad at the next few races. Hopefully it will be a driving game as much as it will be a tuning game – it won’t just all be about horsepower.”

As if racing against the country’s best nitrous-assisted Pro Modified drivers at the Firecracker Nationals isn’t enough, Harris will also take on Moroso Pro Boost points leader Chuck Ulsch and his Roots-blown ’68 Camaro in Friday night’s “Bottles vs. Blowers” grudge race during the third qualifying session.

“I think it’s going to be really interesting,” Harris said. “Chuck has been to all three finals this year and he finally got a win. We came out at Michigan and were pretty solid. I’m hoping the hot weather will slow that blower down just enough for me to get around him. I’m not going to take him lightly and we’re going to treat it just like a final round. Maybe we can prove nitrous is better than blowers.”

“I’m going to even up the score,” Harris said. “Tommy had to race Randy when Randy was in a situation where he needed to get down the track and get into the show. This time it’s going to be a whole different ball game. Chuck is a veteran racer just like me, so it’s going to be a good race – probably one of the best races of the year.”

The Firecracker Nationals will be the first time most of the PDRA’s racers will see the improvements made to Virginia Motorsports Park after two-time and defending Pro Nitrous world champion Tommy Franklin and his family purchased the multi-purpose facility last October. Among those improvements is a new all-concrete racing surface.

“I watched the NHRA race at Virginia earlier this month and everyone was saying the track is smooth and excellent,” Harris said. “Tommy and his team have put a lot of work into the track. We should be able to lay down some numbers even though the temperatures will be up. They’re giving us two days of testing, so after three days of running we should be able to get a hold of it.”

An extended two days of testing will allow teams to prepare for the PDRA Firecracker Nationals, beginning with open testing for PDRA competitors from noon to 6 p.m. Wednesday and 10 a.m. to 7 p.m. Thursday. Qualifying begins Friday at 9:30 a.m. and concludes for the professional categories with Q3 at 8:15 p.m. Sportsman competitors will receive one final qualifying session at 9:30 a.m. Saturday, followed by eliminations at 2 p.m. The final round for all classes is scheduled to begin at 9:30 p.m.

Tickets to the PDRA Firecracker Nationals are available for $10 for Wednesday or Thursday testing, $20 for Friday qualifying and $25 for Saturday eliminations. A weekend pass, good for all three days, is available for $40. Children 12 and under get in free. Tickets are available at the gate or online at www.pdra660.com.