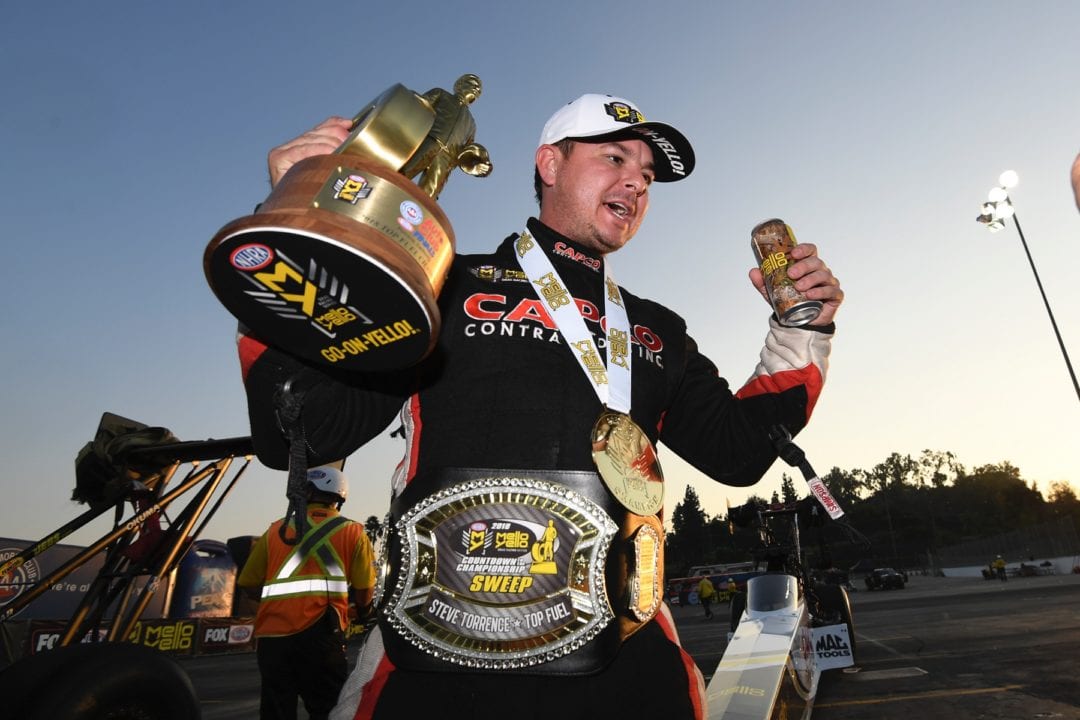 It’s been less than a week since Steve Torrence wrapped up his six-race domination of the Countdown to the Championship.

Emotions can run high in the moments after witnessing the conclusion of a run like this, but my thoughts remain the same as they did on Sunday when Torrence ran out of hands in Pomona as the Wally and trophies and medals and championship belts piled up.

You don’t have to agree and that’s fine, but even the most ardent opposition would have a tough time arguing.

This isn’t discounting the year Tony Schumacher won 15 races – including seven straight – or anything the legends in the class have done in their incredible careers.

But what Torrence did over these six races has never been topped in Top Fuel history.

Save your Indy wins (a singular event) or record-breaking runs (a singular trip down the track). Winning 24 straight rounds in playoff, crunch-time atmosphere against elite competition is the most impressive thing I’ve ever seen in Top Fuel. Ask me again in a week and I might change it to NHRA history.

Again, this isn’t taking away anything from what anybody has done over the last 60-plus year, but damn, this was something special. Please, let us celebrate this amazing accomplishment and recognize it for being that.

I have no problems saying something we’re witnessing now is the greatest ever. It’s not always about the good ole’ days, especially when the best days are actually right now. Pro Mod racing has never been greater than the NHRA Pro Mod class right now and nobody has put together a greater stretch than Torrence just did in Top Fuel. That’s two examples and I know there’s plenty more.

You should be excited about this, too, just as you should be thrilled about J.R. Todd winning the Funny Car championship.

It’s two elite drivers finally breaking through for their first world championships and it bodes well for the future of the sport.

Both are young, both are insanely talented, both shoot from the hip and both aren’t afraid to speak their mind. It’s a major win-win for the sport and it has a chance to really pave the way for future growth in drag racing.

But it’s for that exact reason that I’m also a little worried.

You see, it’s been almost a week and my concerns are centered on Torrence not getting his due for what he just accomplished.

If we’re living in a just motorsports world – and that can probably be heavily debated – Torrence sweeps all of the postseason awards from any possible racing publication. Racer of the Year. Driver of the Year. Cowboy Hat of the Year. Double-Gun Salute of the Year. Whatever it is, if it’s a prestigious racing award, Torrence’s name should be at the top.

I’ve given up hope on winning a possible ESPY – which is nowhere near a just or credible motorsports award. As longtime National Dragster writer Kevin McKenna stated on Twitter, “What credibility? If (Schumacher) didn’t win it the year he won 15 Top Fuel races it’s probably not going to happen. Sadly.”

What credibility? If @TheSargeTF didn’t win it the year he won 15 Top Fuel races it’s probably not going to happen. Sadly. https://t.co/K840YTUNac

In reality, though, it’s an easy choice. Torrence won 11 races this year, going a perfect 11-0 in final rounds as he went 58-13 overall. That’s like a Golden State Warriors basketball record – one that swept the playoffs, mind you – not a drag racing W-L record. He was the points leader for the final 23 races of the season and won the world title by 304 freaking points. That’s after the points are reset before the Countdown. He gained a 274-point advantage on eight-time world champ Schumacher in six races. He beat 10th-place Scott Palmer by almost 700 points. I’m not knocking Scott Palmer, but that’s an incredible amount in six races.

Let’s take it a step further. In two years Torrence has qualified outside the top half of the field ONCE. He’s lost in the first round four times in 48 races in a loaded class that’s tougher than it’s ever been. That’s not me talking, that’s everyone in the class – from Schumacher to Antron Brown – talking.

Sweeping the Countdown is something that’s never happened before and now Torrence is the first. He won every way possible, an incredible display of skill by Torrence and his team.

Again, it’s absolutely unmatched in motorsports in 2018. Forget anyone in NASCAR and whoever managed to win eight times in their 57-race season. Nobody swept their playoffs. Not even close.

Don’t get me started on F1. The number of drivers who can viably race for a championship there each year can be counted by giving the peace sign.

It should be an open and shut case. Nobody topped what Torrence did this season. In my view, it would take winning Indy and then sweeping the Countdown to do it in the future.

I believe it’s the greatest accomplishment in Top Fuel history. Even if you don’t, it’s a spectacular moment and one that shouldn’t be forgotten. Not now. Not in three months. Not ever.