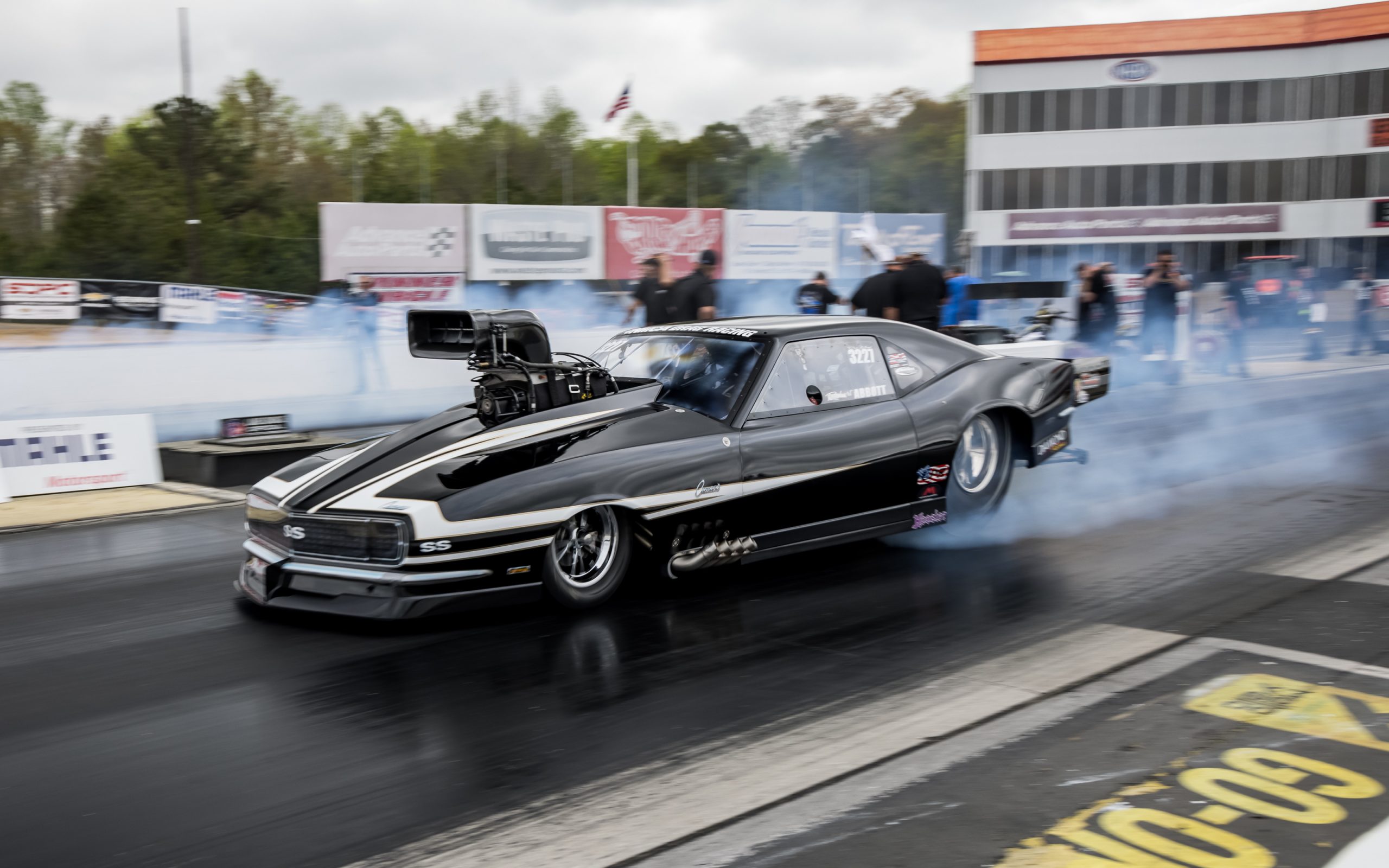 The NMCA enjoyed a relationship with Atlanta Dragway for decades, but with the pending closure of the famed racetrack, this year’s Scoggin Dickey Parts Center NMRA/NMCA All-Star Nationals presented by MAHLE Motorsport event brings it to a close. Defying a poor weather forecast, the NMRA/NMCA combined event completed three qualifying rounds, and welcomed a superb crowd on Sunday for eliminations.

In VP Racing Lubricants Xtreme Pro Mod, Robert Abbott and his supercharged Camaro set the pace with a 3.71 at 203 mph. Chip King grabbed a holeshot win over Mike DiDomenico to earn his trip to the final against Abbott. King was first off the tree again, but Abbott pulled ahead at the stripe for the win, 3.682 to 3.717.

In Mickey Thompson/VP Racing Madditives Street Outlaw Alan Felts took the top spot in qualifying for the second race in a row with a 4.290 at 168.09 mph. The final round of competition, however, saw Florida winner, John Urist, once again facing Steve Halprin. Urist’s Mustang lurched through the staging beams before the tree activated and Halprin went home with the win. 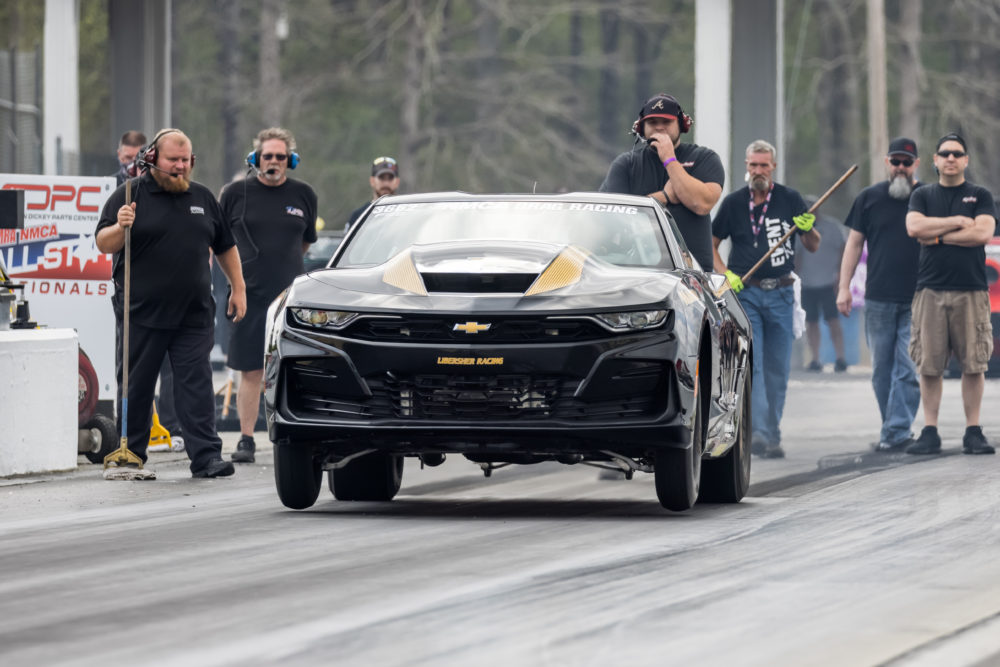 It was all Mustang Cobra Jets and COPO Camaros in the Holley EFI Factory Super Cars class, and Gardner Stone once again showed that his Cobra Jet is a top contender, posting the quickest qualifying time at 7.83 at 177.79 mph. Stone went down in the semis to Scott Libersher, who found himself in the final against Bill Skillman. Uncharacteristically, Skillman charged through the staging beams, handing Libersher the victory.

Repeating his number-one qualifying status at the season opener, Jake Naumann arrived at Atlanta Dragway and set the top time once again with a 4.35 at 166 mph in ARP Nitrous Pro Street competition. Naumann avenged his final-round loss in Florida after taking the win in Commerce when his opponent, Kyle Salminen, went -.005 red at the start. 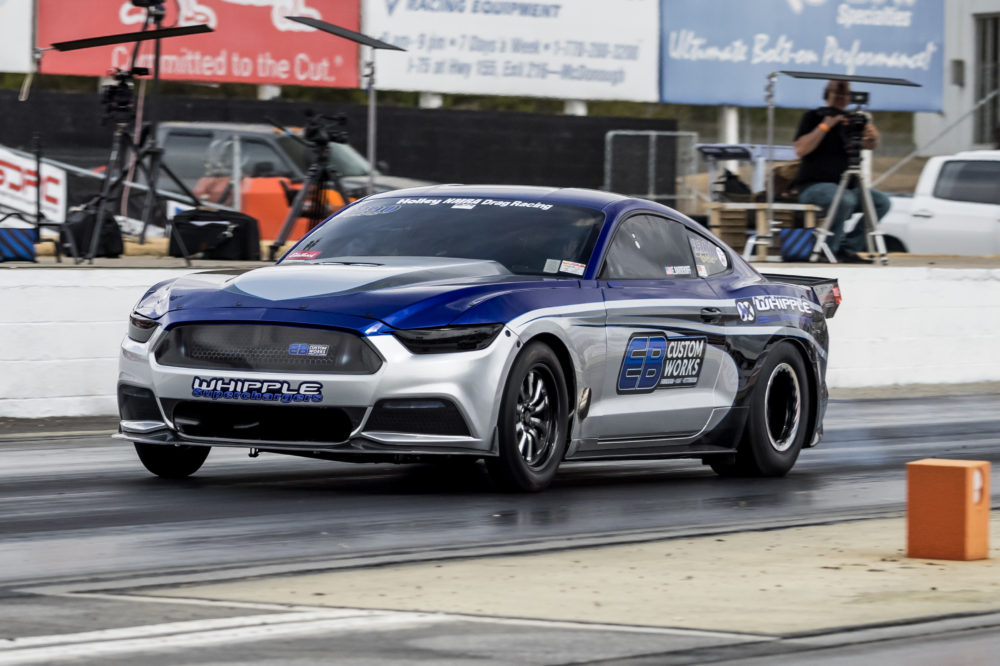 The combined NMCA Edelbrock Xtreme Street and NMRA Edelbrock Renegade classes saw the car count swell to 25, and it was the turbocharged, Buick V-6-powered machine of Dave Fiscus that qualified number one with a 4.573. In the final round, however, it was defending NMRA Renegade champ Joel Greathouse versus Eric Bardekoff and at the stripe, Bardekoff secured his first event win with a 4.538 to Greathouse’s 4.579.

The naturally aspirated engines in Dart NA 10.5 are a sound to be heard, and Leonard Long revved his to the top spot in qualifying with a 7.74 run at 175 mph. Long was out first round, though, and in the final, David Theisen took the win over Joe Clemente, 7.766 to 7.806. 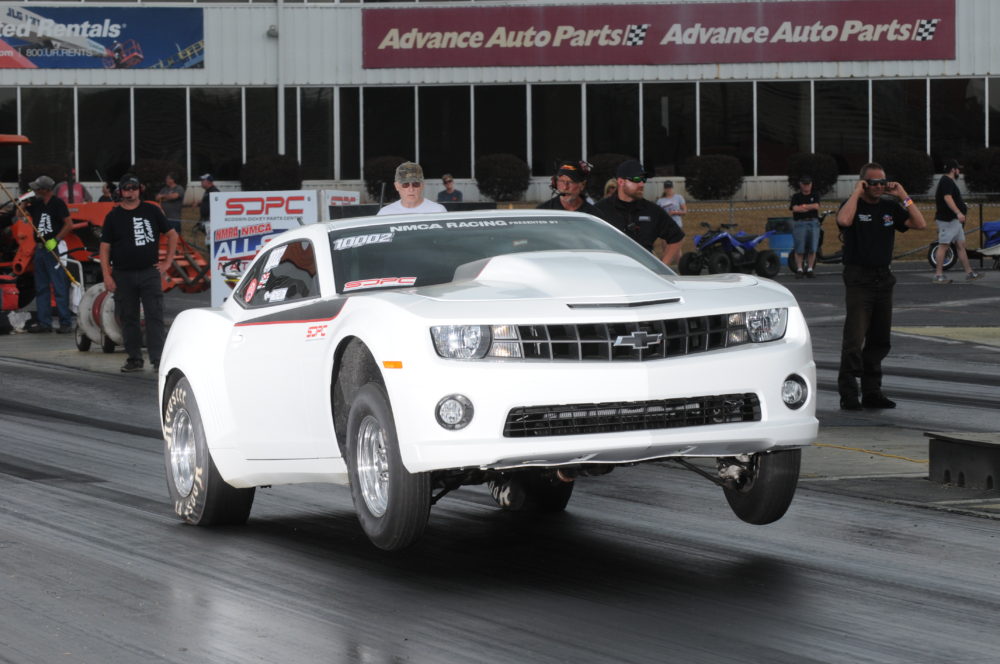 Chevrolet Performance Stock presented by Scoggin-Dickey Parts Center saw Ronnie Hackelton lead qualifying in his Camaro with a 9.936 at 132.01 mph. Hackelton, worked his way to the final and squared off against Florida winner, Glenn Pushis. Both cars left nearly together, but Hackelton edged out Pushis at the stripe for the win, 9.931 to 10.057.

In 24-car field of  the Coan Stock/Super Stock Combo, Bill Skillman edged out Randy Eakins in the last round of qualifying to take the top spot in his Cobra Jet. In the finals, Bruce Lang defeated Al Wilson.

In a class full of Mopars, it was Gary Beemer and his 1963 Pontiac taking the top qualifying spot in Quick Fuel Technology Nostalgia Super Stock. The final round came down to Bruce Lang in his Barracuda and Mike Davis in his Pontiac GTO, with Lang taking home the Victor trophy in this class as well after Davis went red at the start.

Tim Boggs captured the top qualifying spot in Detroit Truetrac Nostalgia Muscle with an 11.000 run on his 11.0 index, and in the final round, Jerry Stamps was victorious over Danny Towe in the double-breakout contest.

Not one, but two MagnaFuel Open Comp drivers recorded perfect reaction times in qualifying, but Kevin White accomplished the feat before Charles Atkinson. Atkinson, however, went on to the final round where he defeated Dennis Corn for the event win.

LME Street King is full of fast cars and great drivers. The final pair of the event featured three-time class champion Kurt Anderson and Keith Vennekotter, both of whom dialed in at 10.50. Anderson went 10.514, suffering a mechanical failure through the traps, and Vennekotter was 10.528, but had the winning package thanks to his starting-line advantage.

Florida runner-up Cody Poston found his way to the Proform Rumble finals again in Commerce, where he faced DeWayne Massengale. When the lights came down, Poston red-lit big and sent Massengale to the NMCA Winner’s Circle.

A feature at all six events on the NMCA tour is the popular Dodge // Mopar HEMI Shootout. James Kiddy ran a three-run average of 10.208 seconds for the class win, while Bruce Phillips grabbed the runner-up spot with a 10.268. HEMI Shootout regular Wade Atchison drove his Dodge Demon to the 10-second win with a 10.306. Additional winners include Mike Copeland (11-second), Jeff Smith (12-second), Alan Scanlan (13-second), Mark Smith (14-second) and Brett Foutz with the 15-second win.

The eight quickest drivers in the Dodge//Mopar HEMI Shootout came together for the Arrington Performance HEMI Quick 8 presented by Red Line Oil. In the final round, Bruce Phillips took the win over Wade Atchison, 10.085 to 10.146.

The NMCA racing action moves to World Wide Technology Raceway at Gateway in Madison, Illinois, next, as the NMRA/NMCA Super Bowl presented by HPJ Performance fires up May 13-16. Visit Nmcadigital.com for more event information.