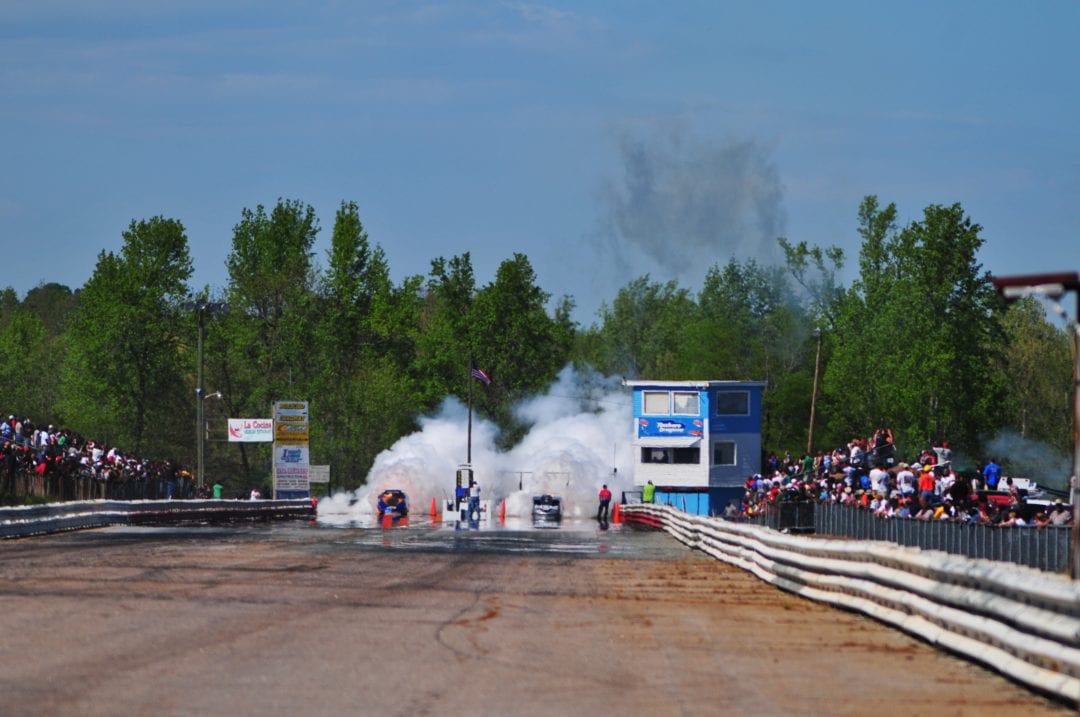 When I begin to think of tracks that host well-known events that have stood the test of time, the first obvious considerations I have are events such as the US Nationals at Indy, or perhaps Cordova’s amazing World Series of Drag Racing, which will host its 65th running in 2018. When it comes to time-honored races local to my neck of the woods, an event known as “Easter Bash” immediately comes to mind.

For 58 years, Roxboro Motorsports Park in Timberlake, North Carolina, has steadily hosted the event that’s practically as old as the track itself, which dates back to the late 1950s. Held annually each Easter weekend, this small, unsanctioned track packs in tons of fans and race cars, both competition and exhibition, to entertain fans and hand out cash and hardware. This month’s column photo is from Easter Bash 2012, and shows Ken Hall and Rich Hanna thrilling fans with a fiery jet car show on the starting line before scorching Roxboro’s eighth-mile strip with side-by-side 200-mph runs!

Without a doubt, the craziest thing I’ve ever witnessed during Easter Bash was the time Bobby Lagana brought his Top Fuel dragster to entertain fans, many of which had never seen a nitro-burning car before. Lagana, who’s both lovable and nuts, blasted down the track, clocking a 3.39-second elapsed time at 229 mph, and had the blower belt not come off the car shortly before the finish line, his time would have been quite quicker.

Lagana later told me that his onboard computer recorded the car traveling 250 mph at the moment the engine pitched the belt. For those of you who’ve actually been to Roxboro, just close your eyes and imagine what 250 mph would look like! The crowd who witnessed this run was straightway stunned, including yours truly. “Roxboro has a lot of personality, and I’m just in shock at the turnout of this event!” Lagana commented that day.

As entertaining and profitable as Easter Bash is for this track, it would be unrealistic to assume this kind of magic could be recreated every single weekend, therefore, Roxboro found itself in a state of decline of late. In fact, the track has been basically closed for the last two years, with the lone exception being its marquee Easter weekend gathering. So, with Roxboro’s future clearly in question, things turned around dramatically when Jody Williams, a Virginia building contractor, bought the track last December and vowed that Roxboro Motorsports Park will be improved and greatly renovated in the coming months and years.

Among the first orders of business, Williams appointed well-known announcer Steve Logan to serve as general manager of the track. Logan first came to Roxboro a decade ago, originally serving as the staging lanes coordinator before finding his way to the announcer’s booth. Since then, his public-address skills have been highly sought-after at many area tracks, as well as Discovery’s hit show Street Outlaws. Even though Roxboro Motorsports Park represents Logan’s first stint at managing a track, he says he’s been accumulating lots of ideas regarding management and promotion during the past 10 years, and now the opportunity to put them to good use has presented itself. For starters, Logan is planning a weekly test-and-tune session that is geared for a particular audience.

“I’m going to hold ‘Import Night’ once a month during test-n-tune in which I will offer a couple hundred bucks for the fastest import time shown. Import owners have been largely neglected at our local drag strips for years, and this is the generation of young people that’s growing up right now…these are the muscle cars of today!” Logan exclaims. “When my generation was young you could go out and buy a muscle car for $2,500, but those cars are now highly collectable and worth a lot, so young people today go out and buy an import and begin tuning on it the best they can.”

So far, interest in Logan’s Import Night theme has gained lots of interest in the area, including several car clubs from nearby Raleigh, all promising they’ll be bringing hundreds of imports on the designated night.

Another theme you can expect monthly at Roxboro is Diesel Night, which Logan also plans to offer the $200 bounty for the fastest run posted. “The following week, I’ll target motorcycle enthusiasts, and then hold the regular Freaky Friday on the last week of the month just like we used to, which was always successful and doesn’t really need revamping.” There are also plans to hold a Top 10 list, in which the fastest 10 cars will qualify with no time shown on the scoreboards.

“We’re having a belt made for our No. 1 racer, something reminiscent of WWF or WCW, and the No. 1 guy from our Top 10 gets to wear the belt all year long, then at the end of the year, we’ve got a Street Outlawsstar coming to match race Roxboro’s No. 1 racer,” Logan says. “Additionally, we’ve got seven bracket races scheduled in 2018, with the season kickoff being held during our upcoming Easter Bash.”

Logan is also energized by the facility upgrades that have been performed since Williams bought the track only a few short months ago. “He’s got many more items on the agenda, including concrete retaining barriers, replacing the bleachers, repaving the shutdown and return road, as well as paving the entrance road into the facility, which is currently gravel.”

Roxboro will also utilize the tractor pull and mud bog tracks on the property, which have been in place for years, but almost never used. Logan also m promises that the stage at Roxboro will see many musical acts this year.

Moving forward, Roxboro Motorsports Park has plans to use the facility to its full potential, and since nothing breathes new life into a track quite the way a new owner and manager can, patrons in this area are excited to see how things develop at their local drag strip.