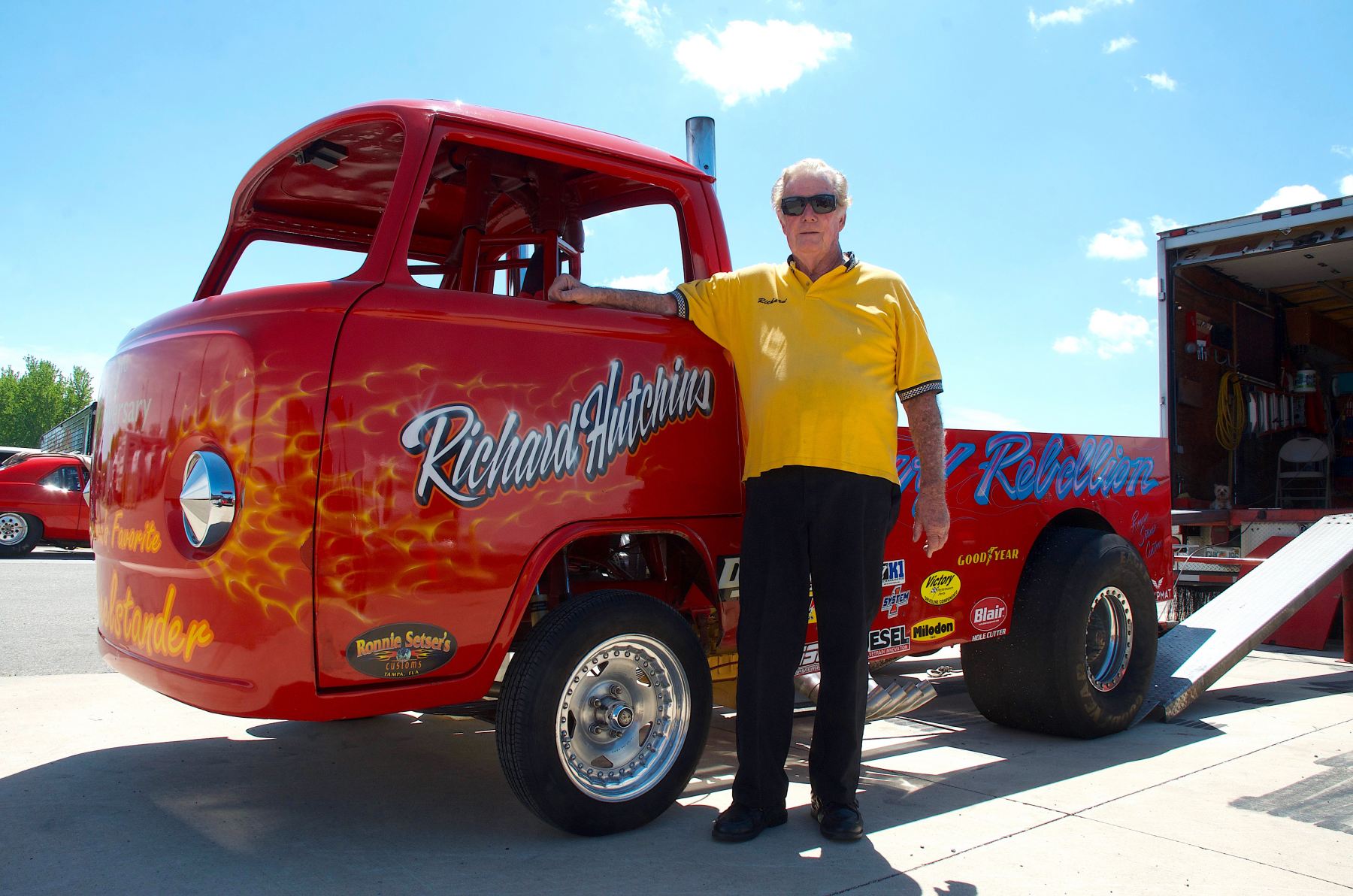 When it comes to witty individuals, there’s few I enjoy gleaning life experiences from more than legendary exhibition wheelstander driver Richard Hutchins. The framework of this column is the result of chatting with Hutchins in recent years, although I’ve intentionally waited until 2021 rolled around to pen this story. This year marks the incredible 55th year of Hutchins’ traveling wheelie-riding act, the longest stint in exhibition drag racing that I’m aware of…certainly among the wheelstanding contingent.

As I disclosed in a recent column, I’ve currently visited 155 different dragstrips, which is ironic since I first saw Hutchins do what he’s famous for more than three decades ago at North Carolina’s Hudson Drag Strip, which comes in at track #1 on my ever-growing list. Hutchins’ wheelstanding act represents one of my earliest dragstrip memories and more recently, we’ve been bumping into each other a few times a year across the United States. While I don’t always conduct an actual interview with him, I do make it a point to spend a minute and catch up whenever we’re on the same property.

[Editor’s Note: This column originally appeared in DI #165, the Season Preview Issue, in February of 2021.]

The photo in this column depicts a then-81-year-old Hutchins that I snapped at Wisconsin’s Great Lakes Dragaway in 2019, a track that’s been booking him twice yearly since the late 1960s! “They tell me I’m guaranteed for life, but they’ve never said whether it was my life or theirs,” he chuckles.

The legendary Memorial Day weekend event at Great Lakes Dragaway was indeed one of those occasions when I asked Hutchins if he could spare a moment for an early-morning interview. “Absolutely,” he starts with a straight face, “and I’d like to begin by saying I don’t date fat women!” I was taking a drink of delicious, black coffee when he delivered this unexpected bulletin and it nearly came gushing out my nose before I could regain my composure.

Another instance when Hutchins had me laughing out loud was the time he was explaining to me why he moved away from St. Petersburg, Florida. “It’s where old people go to die!” he declares. Of course, I asked him to elaborate. “Every time I left out on the road and came back six months later I’d always have new neighbors, so when I realized what was happening I knew I had to leave St. Petersburg before I got old!” he laughs.

Hutchins has a lively reply for pretty much every question I’ve ever lobbed his way. “Sir, have you ever been married?” I once inquired during an interview. “I’ve been married twice…they both died, but I didn’t have anything to do with it!” he quickly assured me.

The story of how he became involved in the wheelstanding show business is also an entertaining tale, and the whole thing began as a freak accident, really. Back in the early 1960s he was racing his B/Gas Studebaker at a track in Deland, Florida, when the car suddenly caught some otherworldly traction and Hutchins rode out this obscene wheelie. The guy in the other lane protested to the track owner, accusing Hutchins of having something other than a regulation motor in his car. The track owner agreed and told Hutchins if he ever did that again he’d be banned for life!

Suddenly, the wheels started turning inside Hutchins’ head and he came up with an ingenious idea. He bought a Dodge A100 truck and made a wheelstanding exhibition vehicle out of it! Ironically, the track in Deland (which threatened to ban him for life for popping a wheelie during a class race) was the first to book Hutchins after he claimed he could travel the entire length of the track on his rear wheels!

In the early days, Hutchins hauled around his Dodge truck wheelstander on an open trailer towed by a 1949 Cadillac limousine, which turned plenty of heads as he barreled down the interstate. The Dodge A100 bore the name “Chevy Rebellion” – a slogan he borrowed and tweaked from a Chrysler advertising campaign in the 1960s, which encouraged an already restless generation to “Join the Dodge rebellion.” Since Hutchins decided to put a Chevy motor in his Dodge truck, he figured how much more could a fella rebel?

The A100 was used for Hutchins’ touring exhibition all the way up to the early 1980s, after which, he decided to retire the truck and switch to the current Volkswagen truck cab mounted on a homemade chassis, continuing of course, with the Chevy Rebellion moniker. “I’m like a professional wrestler – I’m paid to put on a show and if I’m doing a match race it all pays the same, so if a track tells me to lose, I lose!” he laughs.

After over a half-century of nonstop touring and entertaining fans, Hutchins can hardly call to memory the number of tracks he’s visited, and many of them have long-since closed. Oh, he’s met some characters along the way, too. Many years ago in the panhandle of Florida, everybody kept talking about this pool hall, so he decided to check the place out and was stunned to learn that the evening’s entertainment was this ol’ boy who pulls a rattlesnake from his pocket and places it on a pool table, while onlookers place bets as to which hole the serpent will slither down! “There’s been so many unique things I’ve come across in my travels,” he declares.

If it ended tomorrow, it’s been a mighty fine gig for the now-83-year-old entertainer, and after 55 years his calendar remains full, as tracks are eager as ever to book the famous Chevy Rebellion Wheelstander for their most celebrated events.

Meanwhile, I’m out here just trying to conduct an interview without spewing coffee all over this stately gentleman…and believe me when I say, he doesn’t make it easy!