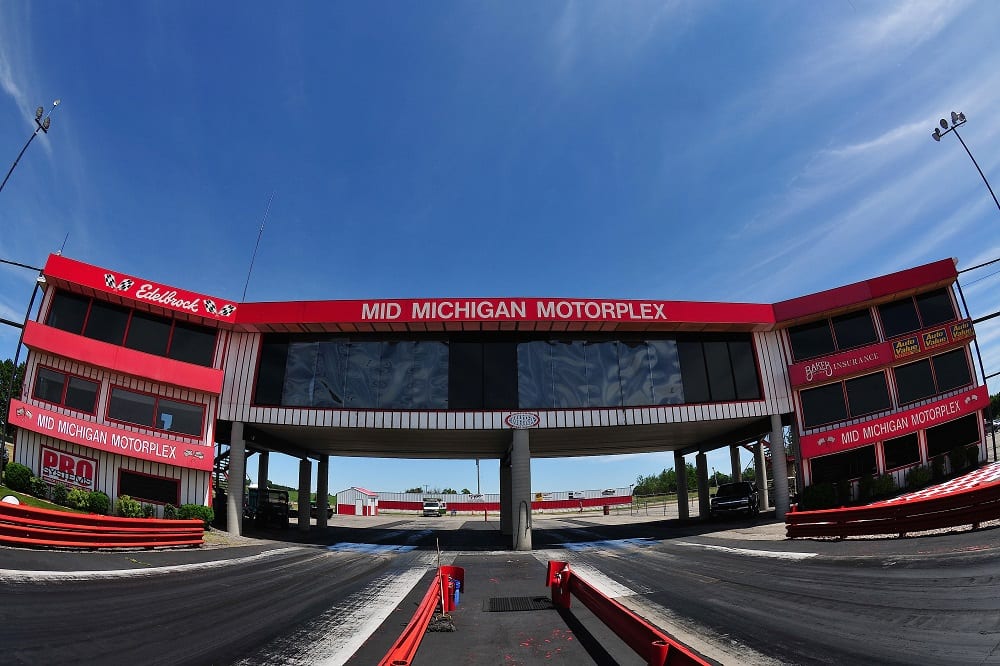 Few people have ever been as determined to refurbish a dilapidated drag strip as Jim and Mary Ledford were in 1975 when they decided to resurrect the Mid Michigan Motorplex. In many ways the labor-intensive project didn’t exactly make perfect sense to all observers, especially when considering the Ledfords already owned a perfectly good and operational race track (a facility they built from scratch in 1970), located in the northwest corner of the state.

Nevertheless, their interest in restoring Mid Michigan Motorplex occurred when many of their racers began driving up from the middle of the state to race at the Ledford’s track in Kaleva, all the while persuading them to consider reopening the long-abandoned drag strip located in the central Michigan town of Stanton. So, upon the urging of their midway clientele, Jim and Mary decided to strike out on the 120-mile journey to the heart of Michigan to evaluate what it would take to make the track operational again.

Mid Michigan Motorplex lies on a vintage piece of real estate that originally operated as an early 1950s-era airport before being converted to what was then called Central Michigan Dragway. Eventually, the track closed in 1968 and remained shuttered for seven years before the Ledfords came to take an objective gander at the place. At the time, the property was being used by skydivers who realized the vacant drag strip made a perfect landing spot after taking a leap of faith from an airplane.

The Ledfords had other ideas, though, and decided to take their own leap of faith. So, after bidding farewell to their northern Michigan home, they loaded their family station wagon with a few possessions, as well as their two young sons, Mike and Jeff, and headed for Stanton. They not only traveled in the wagon, they also slept in it at the track for the first two weeks. “Our boys would lay on the front and back seats, while Jim and I slept long ways in the back of the wagon,” recalls Mary. She and Jim worked tirelessly until dark, and then retired to the wagon for a good night’s sleep.

Pretty soon the area racers heard about the Ledford’s efforts to reopen their local track, so they sprang into action to lend a hand. Thankfully, there was an active well on the property, so someone came out and installed an old-fashioned pitcher pump, so they could draw water and enjoy something that resembled a bath. Somehow or other an outhouse was also acquired. A short time later, another racer brought them an old camper, which was actually a huge upgrade in accommodations for the family after several nights sleeping in a station wagon. The volunteer army continued to grow, and a groundswell of support rallied around the Ledfords to help them bring back to life this drag strip that had been long forgotten.

They worked around the clock all summer long with a goal of having their grand opening on Labor Day Weekend in September 1975—a goal they proudly reached. Jim and Mary were actually putting the finishing touches on the timing tower they had built themselves when they opened the gates for their grand-opening weekend 41 years ago. “The tower wasn’t exactly finished though, it didn’t have any doors,” Mary laughingly confesses.

Since the burnout box was positioned directly beneath the tower, the ear-splitting sound of race motors rattled through the tower and echoed loudly while the announcer tried to talk, not to mention lingering burnout smoke would drift in and out when the wind was just right. Regardless of the incomplete renovations, the opening weekend was a huge success and the Ledfords kept the track open that year for as long as they could before the cold Michigan winter set in.

On the property stood a tiny shack of a house and when the occupants moved out, Jim, Mary and the kids moved in. Also on the grounds stood an old airplane hangar left over from the airport days. Legend has it the likes of Garlits, Kalitta, Karamesines and other early pioneers of drag racing used to hole up in that hanger in the 1960s to play cards well into the night.

Other memorable tales go back even further. On Mary’s desk she keeps a copy of a Midwest coverage paper called Drag Times dated July 18, 1958, with a 20-cent price on its cover. There’s a story in there about a guy from Tucson, Arizona, who clocked a record 10.10 at 155.17 mph on Mid Michigan’s quarter-mile, while driving what was then considered to be the “World’s Fastest Roadster.” Then, almost two decades later in 1996, Top Fuel driver Blaine Johnson clocked 4.68 at 307 mph during a match race at Mid Michigan—at a time when the national record was just 4.64 seconds! Tragically, Johnson died about three months later in a crash at the U.S. Nationals in Indy and the Ledfords held a heart-touching memorial for Johnson at Mid Michigan.

Two years later, Mary stood at the exact spot on the track and held another memorial, this time for her beloved husband, Jim Ledford, who died at age 55 from heart complications. He passed away a few days before Christmas in 1998 and his funeral was held on December 24th. The Johnson family flew in to honor the man who had so greatly lifted them up after their own loss. When the reality set in for Mary, she seriously wondered if she was going to be able to move forward. But her children came in and helped her get the track open for the 1999 season. “I had to mentally program myself to get up each day and do this,” she declares.

Just one-year prior, she and Jim oversaw a massive remodeling of the track, including just about every conceivable renovation you could imagine, including a massive new tower. Suddenly, it was now up to Mary to keep the place going. “It was a terrifying time in my life,” she admits, reflecting on Jim’s passing 18-years ago. With gritty determination she pushed forward. She eventually remarried five years ago to a man who also had lost his spouse.

“No one understands that loneliness until you experience it,” she confides. “There will always be a spot in my heart for Jim, but there’s always enough room to let someone else in.”

Her husband, Chris Rasmussen, is a life-long farmer, while Mary continues to oversee the operation of Mid Michigan Motorplex. She’ll be 68 on her next birthday and sometimes fondly (although in disbelief) recalls the weeks of sleeping in a station wagon when she was in her 20s. “I look back now and can’t believe we actually did that,” she says.

While she still passionately talks up all things racing, it should come as no surprise that Mary Ledford sometimes contemplates retirement. “I’ve got aches and pains and I’m getting tired,” she confesses. She and Chris dream of traveling someday. “All I’ve ever known is drag racing, so I’m kinda curious to see what the rest of the world does on their weekends.”

This column originally appeared in Drag Illustrated Issue No. 111, the State of Drag Issue, in July of 2016.