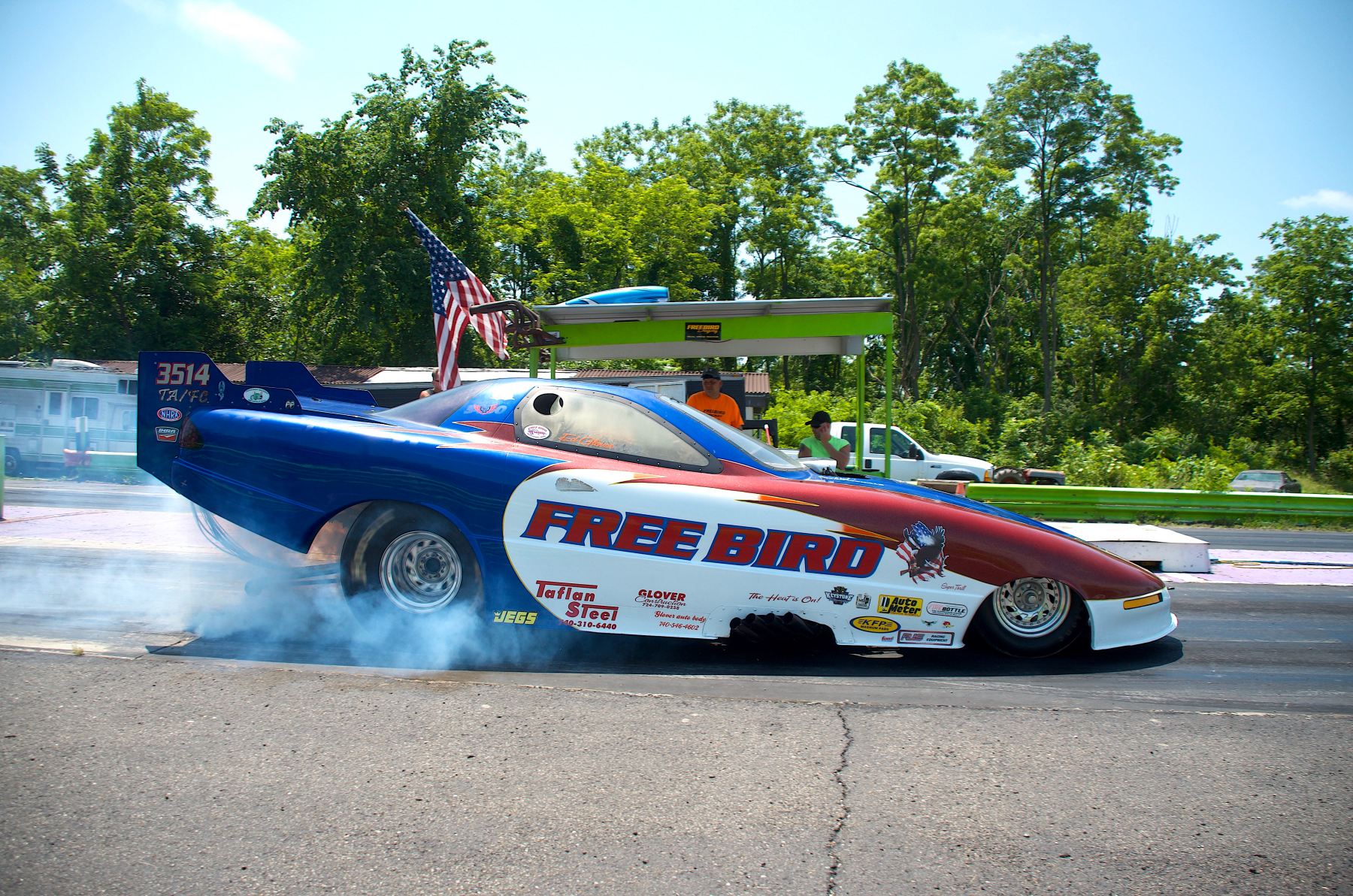 I’ve seen some pretty cool setups when it comes to racing facilities over the years, but nothing quite as unique as Free Bird Dragway, which is located inside a state park in Ohio, and had I not experienced it first hand, I would have trouble believing the place really existed.

I was seriously questioning if I was in the right place as I pulled through the gates of Friendship Park, situated just outside the tiny village of Smithfield, Ohio, in Jefferson County. I slowly drove past a huge lake to my right, and then came to a stop to allow a flock of Canadian geese to cross the road in front of me.

As I continued my slow-paced journey through this scenic nature park, I was once again wondering if I had taken a wrong turn, when suddenly I came upon a group of signs that detailed even more amenities inside the park, including “Free Bird Dragway” which was written on a wooden sign that pointed to the left. From there, it was a short drive up a gently sloping incline which took me past the RV camp sites and ended at the dragstrip. “Unbelievable!” I remember thinking to myself…and how did it take me this long to hear about this place?

Friendship Park opened in 1972 and even featured an airstrip owned by Consolidated Oil Company, which would eventually become the dragstrip. It was 1994 when the track first opened under the name Steel Valley Dragway, then eventually was renamed Friendship Raceway.

When the current owner, Edward Glover, bought the lease four years ago, he had the perfect name for the track in mind. “I already had the Funny Car…it was red, white and blue and had ‘Free Bird’ written on it, so I thought that would be a great name for the track, too!” says Glover, who’s also pretty fond of the Lynyrd Skynyrd song with the same name.

Glover is a longtime racer who first came to the track at Friendship Park right after it opened 27 years ago. After he bought the track lease he recruited his family (who also love racing) as his staff. His 16-year-old daughter, Shelby, runs the tower, while sons Jesse, Steven and Eddie Jr. all help keep the place running, along with his daughter-in-law, Brianna. “My girlfriend, Wendy, runs the concession stand,” Glover adds.

Ironically, the perimeter of Friendship Park measures exactly 1,320 acres, which is merely a fantastic coincidence as far as the dragstrip is concerned. “This track actually did operate as a quarter mile…for exactly one race!” explains Glover. “They tried racing on the quarter mile on opening day, but the road gets a little rough down track, so it was shortened to an eighth mile the very next race, and that’s how it’s been ever since.”

To the best of Ed’s knowledge, the eighth-mile track record is a 4.60 elapsed time, set by someone driving a Chevy truck with some extreme modifications. Ed has made some easy 4.90 passes in his Funny Car here.

Incidentally, I called Ed on a Friday morning and introduced myself, telling him I wanted to visit Free Bird Dragway on Saturday and feature the track in my monthly column. His beloved Funny Car was actually in quite a few pieces, and Ed hadn’t even made a full-throttle pass in it ever since he broke his back a couple years ago.

“It was a freak accident that happened while I was on my way to the track,” explains Glover. “A guy was coming down the road and his right rear wheel came off and was heading right for me!” Ed swerved to miss the runaway wheel and he went through someone’s yard and down an embankment. “I couldn’t walk for 2 weeks!” he exclaims.

Ed figured it was time to put the Funny Car back together since I was stopping by, if for no other reason than because it represented the track so well. After seeing how magnificent the car looked, Ed couldn’t help himself – he decided to get suited up and make an easy pass, which he says “felt good” and was straight as an arrow, and pretty much the highlight of my visit!

Among the biggest races here at Free Bird in recent memory was when JJ Da Boss of Memphis Street Outlawsfame was featured in a three-day event in 2019.

Most weekends, the track operates on Fridays for test and tune, and on Saturdays they have a bracket race, with the occasional track rental on Sunday. They don’t tally points during the bracket races, it’s just a group of friends out having the time of their lives racing together. Ed only charges spectators $5 and kids are free.

The homemade French fries are legendary, and even some of the park goers who aren’t racers stop by for the fries. Ed welcomes the campers inside the park as well as anyone else to visit this amazingly unique dragstrip, enjoy the food and get acquainted with drag racing. “It’s a family-orientated atmosphere and a great place to let the kids run around,” says Ed.

Free Bird Dragway is the 157th different dragstrip I’ve visited in my travels, and its uniqueness is unrivaled. So, for my gearhead friends who dream of traveling the country and exploring new places, grab your fishing rods, camping gear and, of course, your helmet and head to Friendship Park. You’ll swear you took a wrong turn, but just keep driving until you see the dragstrip sign. It will be an unforgettable experience!