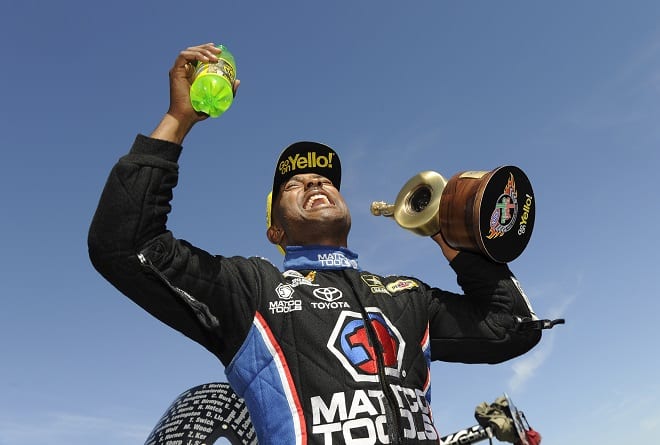 Jack Beckman finished off a dominating weekend at the NHRA Sonoma Nationals on Sunday by racing to the Funny Car victory.

Antron Brown (Top Fuel), Chris McGaha (Pro Stock) and Eddie Krawiec (Pro Stock Motorcycle) also were winners of the NHRA Mello Yello Drag Racing Series event at Sonoma Raceway. It is the first time in NHRA history where all four No. 1 qualifiers went on to win the race.

Beckman kept alive his hopes of becoming the eighth driver to sweep the Western Swing and only the second in Funny Car to accomplish the feat when he sped past Tommy Johnson Jr. to claim his fifth victory of the season and 20th of his career. The NHRA Western Swing, an NHRA summertime tradition since 1989, begins in Denver, moves on through Sonoma and finishes in Seattle in a three-week stretch. 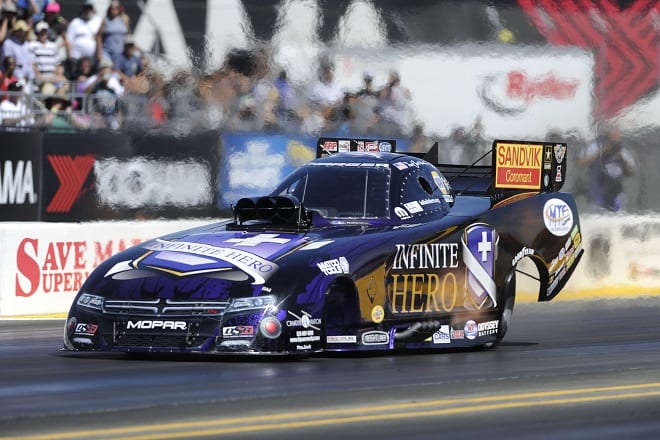 Beckman took his first Sonoma win with a final-round performance of 4.037 seconds at 310.63 mph in his Infinite Hero Foundation Dodge Charger to pull away from Johnson near mid-track, whose Make-A-Wish Charger trailed with a 4.073 at 308.99.

Beckman, who defeated Tony Pedregon, Chad Head and Robert Hight to advance to the final, also received a 20-point bonus this weekend for setting the national E.T. record at 3.921 seconds.

“I feel like I have the best crew in drag racing right now,” said Beckman of his team which is led by crew chief Jimmy Prock. “Winning the race and being No. 1 qualifier and setting the national record is icing on top of icing on top of the cake. It couldn’t have been any better. I don’t think this weekend will sink in until I’m on the plane going to Seattle.”

Veteran tuner Prock said he was even blown away by how well the car ran all weekend.

“We race a lot, we live it and you don’t have many weekends like this,” said Prock, who worked with John Force Racing for 15 seasons before joining Don Schumacher Racing late last year. “We had an opportunity and we got off to an excellent start. That was an advantage right out the gate, we already had a three-second run on the board so we had an opportunity to go after it Friday night.”

Despite earning a near-perfect 147 of 150 available points during the weekend, Beckman still trails series leader Matt Hagan by 57 points. Hagan qualified second and lost in the second round to runner-up Johnson Jr. 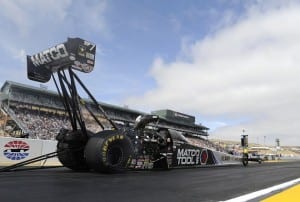 In Top Fuel, Brown claimed his fourth win of the season and 51st of his career by outrunning first-time finalist Dave Connolly. Brown took his fourth Sonoma win by powering to a final round effort of 3.787 at 320.74 in his Matco Tools dragster and crossing the finish line just in front of former Pro Stock racer Connolly, whose C&J Energy Services dragster clocked a 3.808 at 319.14.

The win was former Pro Stock Motorcycle racer Brown’s 35th in Top Fuel, a mark that ties him with the legendary “Big Daddy” Don Garlits.

“That’s a true, true blessing,” said Brown, who outran Steve Chrisman, Richie Crampton and Tony Schumacher en route to the final. “When I grew up in this sport, everybody knew who ‘Big Daddy’ was. What got me interesting in the sport was seeing him blowover in ’86 at Englishtown. I said, man, he’s crazy, but he got back in that car and did it again but ended up winning the championship that year. We have a unique relationship. To tie one of the greatest racers in history is unbelievable, but it hasn’t sunk in. It won’t sink in until I leave this sport, because I’m still hungry.”

Semifinalist Schumacher remained in the series points lead in his U.S. Army dragster, 37 in front of Brown.

Texas native McGaha earned his first career Pro Stock victory by racing past Jonathan Gray in the final round. McGaha powered his Harlow Sammons Racing Chevy Camaro to a 6.531 at 212.13 to hold off Gray’s Gray Manufacturing Camaro, which trailed with a 6.560 at 211.03.

McGaha, who was a runner-up in his two previous finals, defeated V. Gaines, Erica Enders and Jeg Coughlin Jr. in the first three rounds. 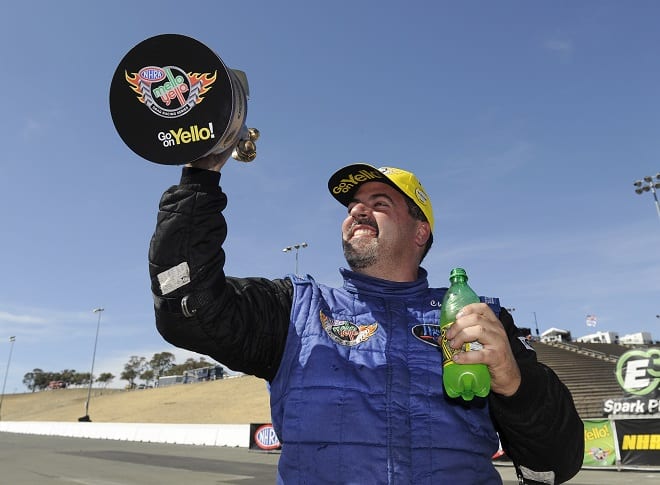 “This has been 30 years in the making,” McGaha said. “All those years that my dad [Lester] ran in Comp and with me in Pro Stock. There were plenty of times when we’d leave the house and think, ‘Maybe this is the week.’ My dad came close a few times, and we had a few heartbreakers along the way. This takes the monkey off my back. I really want more, but if I only get one of these [Wally trophies], I can live to be content with that.”

Greg Anderson maintained the series points lead, 47 in front of Erica Enders. McGaha remained in fourth, but cut his deficit to the leader to 210 points.

Krawiec, who also won the NHRA Pro Bike Battle on Saturday, earned his second consecutive Pro Stock Motorcycle win of the season and 29th of his career by riding past Jerry Savoie at the finish. Krawiec rode his Screamin’ Eagle Vance & Hines Harley-Davidson to his second consecutive victory and third overall at this event with a performance of 6.881 at 191.00 to hold off Savoie’s Alligator Farm Suzuki, which finished in 6.891 at 194.13.

Krawiec said even though the bikes don’t race in Seattle, and aren’t a part of the official Western Swing, he decided to celebrate his own unique trifecta anyway.

“We took a picture with a broom because this is sort of our mini-swing,” Krawiec said. “I was fortunate to win in Denver, and yesterday we won the [Pro Bike] Battle and today won Sonoma. That’s a good run for our Harley team. What sets this track apart is that this is one of the best surfaces we run on.” 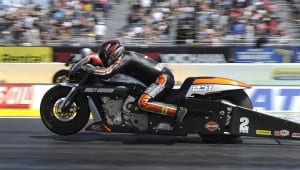 “I give a lot of credit to my crew chief, Matt Hines, and everyone at Vance & Hines,” Krawiec said. “They took an outsider and turned him into a race winner and a champion. Matt is a very unique individual. He is a thinker, and the way I look at it, he has [97] wins because all of my wins, all of Drew’s [teammate Andrew Hines] wins, and all of his wins count the same because he was a part of them.”

The NHRA Mello Yello Drag Racing Series continues next weekend, Aug. 7-9, with the final stop of the Western Swing at the NHRA Northwest Nationals at Pacific Raceways near Seattle.