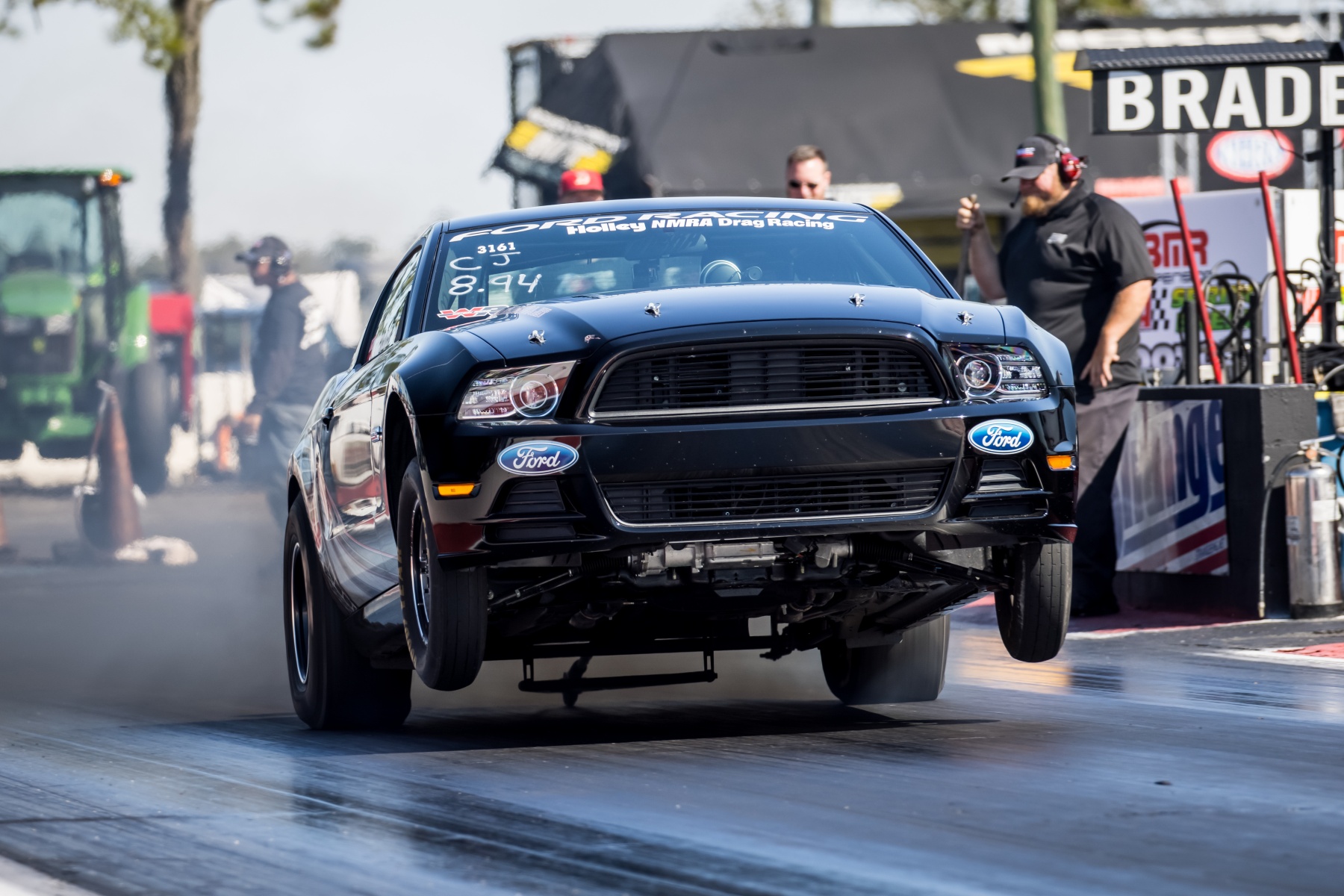 The highly anticipated start of the 2021 Holley NMRA Ford Nationals began with the 27th Annual BMR Suspension NMRA Spring Break Shootout at Bradenton Motorsports Park in Bradenton, Florida, over the weekend of March 5-7, 2021.
Dramatic shifts in the weather—from temperate sunshine on Friday to dreary rain on Saturday and mineshaft air with a strong tailwind on Sunday—forced some adjustments in the schedule, but the NMRA staff and racers rallied to ensure the event ran to completion and the history books were filled with the names of new winners and record-setters as a result.

After a long winter of waiting, fans and spectators also enjoyed a great weekend of exciting racing action along with a complete manufacturer’s midway chock full of great deals, a cherry picker’s dream of a swap meet, a killer UPR Products Car Show, and more. 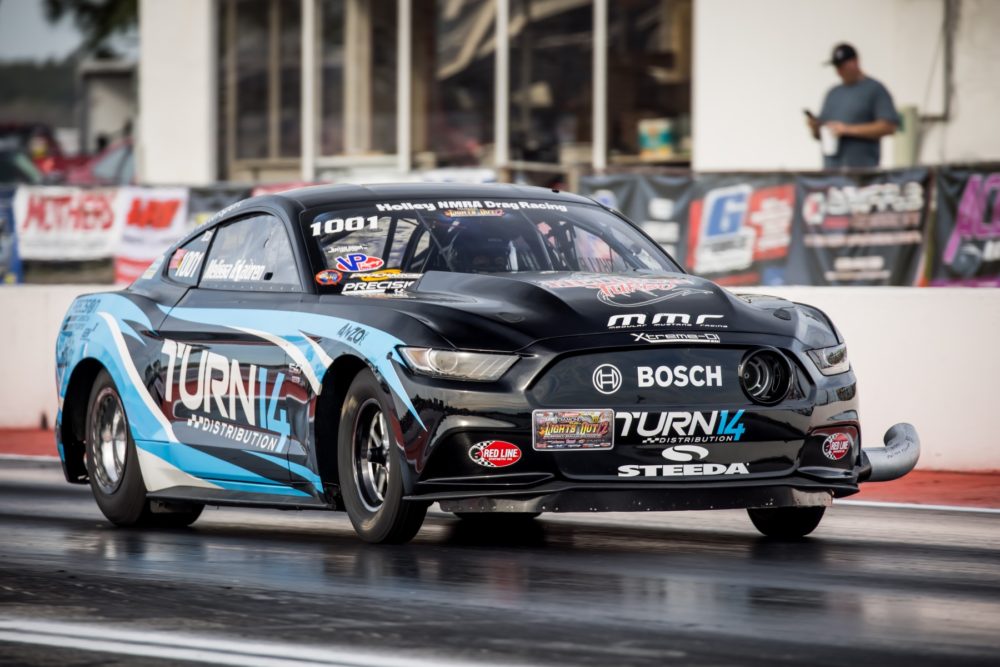 Coming out on top of VP Racing Madditives Street Outlaw qualifying was the turbocharged ’02 Mustang belonging to Steve Halprin courtesy of a 4.249 at 170.28mph blast. Halprin stayed in the game through to the finals where he met with the number-two-qualified driver, John Urist of Hellion Turbo fame, and although he had the holeshot advantage, tire spin was Halprin’s undoing as Urist cruised to the win on a 4.261 at 171.97 mph with his turbocharged S550 Mustang.

Hometown hero Bill Gregan and his ProCharged Fox Mustang blasted through the Edelbrock Renegade field in qualifying, taking the lead with a 4.566 at 152.90mph pass. Hot on his heels was Charles Bartholme of Salisbury, Maryland, in second with a 4.576 at 153.58mph trip. The two staged their ’90 Mustangs together in the finals, and while Gregan had the holeshot advantage, his early troubles meant Bartholme easily drove around his competition to capture the win with a 4.557 at 154.21mph time slip.

Samantha Moore’s 8.318 at 161.15mph trip during JDM Engineering Limited Street qualifying put her into the number-one spot, and was only the beginning of her class-leading performances this weekend. In eliminations, Moore improved round after round and reset the class record with her 8.18-second hit behind the wheel of her supercharged ’14 Mustang California Special. She continued her onslaught all the way to the last matchup and took down Kent Nine with a vicious 8.194 at 162.68mph final blow.

A competitive group of G-Force Racing Transmissions Coyote Stock drivers came out to show off, but Nathan Stymiest was the quickest of all and led qualifying thanks to a 9.719 at 137.53 mph pass in his ’92 Mustang. Showing that his advantage was a solid one, Stymiest went on to collect yet another win in his impressive career by putting number-three qualifier Frank Paultanis and his ’04 Mustang on the trailer in the finals, 9.706 at 138.78 mph to 9.869 at 136.98 mph.

Sitting first in Richmond Gear Factory Stock after the qualifying order was set was Mike Bowen, whose ’71 Maverick stopped the clocks in 10.212 seconds at 131.04 mph. Bowen advanced to the finals, but met with Pennsylvania-based racer Justin Fogelsonger who had qualified second. When the lights came down, Fogelsonger’s ’88 Mustang was the first to leave the start and the driver maintained the advantage through to the finish line where his 10.153 at 131.48 mph cemented him as the overall winner for the weekend.

Outgunning the rest of the Exedy Racing Clutch Modular Muscle drivers in qualifying, Darren Foster had a perfect “trip zip” reaction time ensuring he and his ’05 Mustang GT received top billing. He bowed out in round two, but Jason Steamer and Jason Henson both surpassed the competition for the final show. Steamer’s ’08 Mustang GT went up against Henson’s ’03 Mach 1. When the men crossed the stripe together, it was Steamer who drove back to Winter Park, Florida, as a winner. 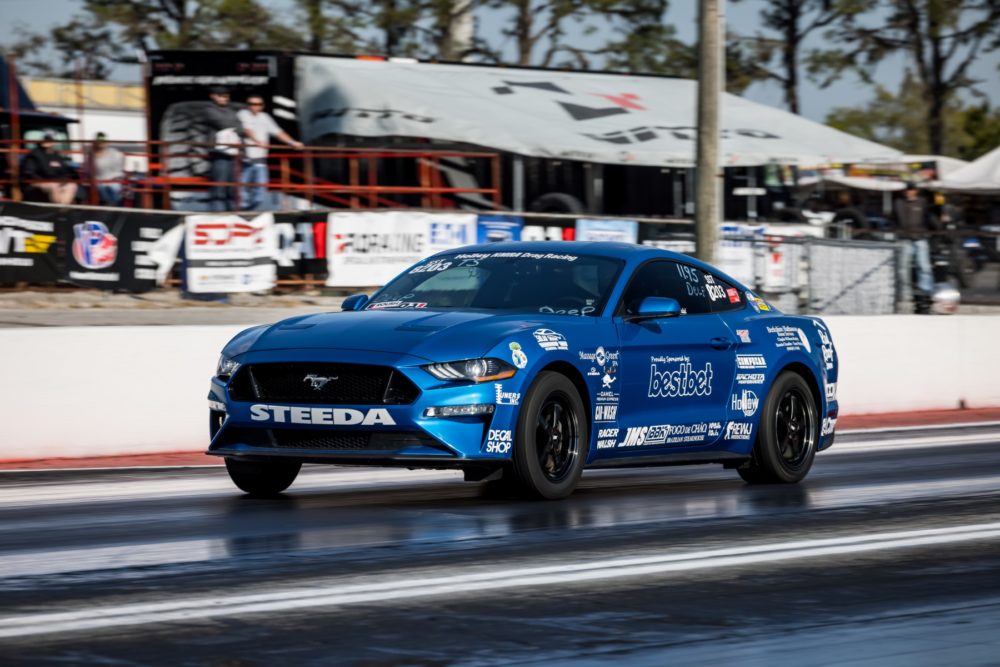 Running the gauntlet in Fastest Street Car Super Stang qualifying, Chris Parisi left the line just 0.005 seconds after the green illuminated and his ’20 Mustang helped him secure the leading position. Making his huge array of sponsors proud, Parisi went on to defeat Lloyd Mikeska, who had qualified third, in the finals when he ran 12.089 on his 11.95 dial to Mikeska’s opposing 12.167 on his 11.97 dial in.

The huge ARP Open Comp field had some stiff competition as always, with two drivers cutting 0.000-second lights in qualifying. Gerg Cole with his ’88 Mustang and Cameron Bowles with his ’72 Mustang were ranked first and second, respectively, while eliminations hosted Woody Pack of Independence, Virginia, fielding his ’66 Mustang and Steve Cannizzo of Bradenton, Florida, driving his ’67 Mustang. It was a double-breakout situation, but the lesser of two evils swayed in favor of Pack.

A perfect 0.000-second reaction time from reigning champion Bob Dill, who pilots an ’01 Ford F-150, earned him the number-one spot in Detroit Locker Truck & Lightning. Dill went out in round two of eliminations, but both Mike Roup who qualified second and Fred Wade who qualified fifth, hung on until the end. In the finals, Roup and his ’70 Ranchero bested Wade and his ’04 Lightning when he went 11.362 at 118.72 mph and captured the win to take back to his home in Lockhart, Texas.

Only 0.007-seconds off his 11.00 index with his ’87 Mustang, Alan Hill was the number-one-qualified driver in RacePagesDigital.com Ford Muscle. Hill hustled hard through each of the competitive elimination rounds and earned his spot in the final. There, opponent Bill Lee Jr. of Palmetto, Florida’s ’79 Fairmont was unable to make a run and so Hill was defaulted the win although he ran under his 11.00 dial in with a 10.945 at 122.05mph pass.

Over 100 car-and-driver pairs were on site to show off their street-legal rides in QA1 True Street, but the traditional 30-mile cruise was called off due to unsafe conditions from weather and instead replaced with a timed session spent idling in the pits. After three passes down the drag strip on Saturday night, Donato Sierchio of Forked River, New Jersey, was determined to be the quickest of all as his ’86 Mustang ran the 1,320 in an average time of 8.305 seconds. Larry Albright took second place honors with his ’91 Mustang and an 8.409-second average, while Don Walsh and his ’20 GT500 took the win in the 9-second category. The quickest of the 10-second cars was Scott Boda’s ’18 Mustang, Cary Shotwell and his ’17 Mustang were winners in the 11-second section, while Maci Belcher and her ’16 Mustang were victorious in the 12-second group. Additional winners included Ray Eugenio in the 13-second bunch, Rick Doern in the 14-second segment, and Stephen Priske in the 15-second section. 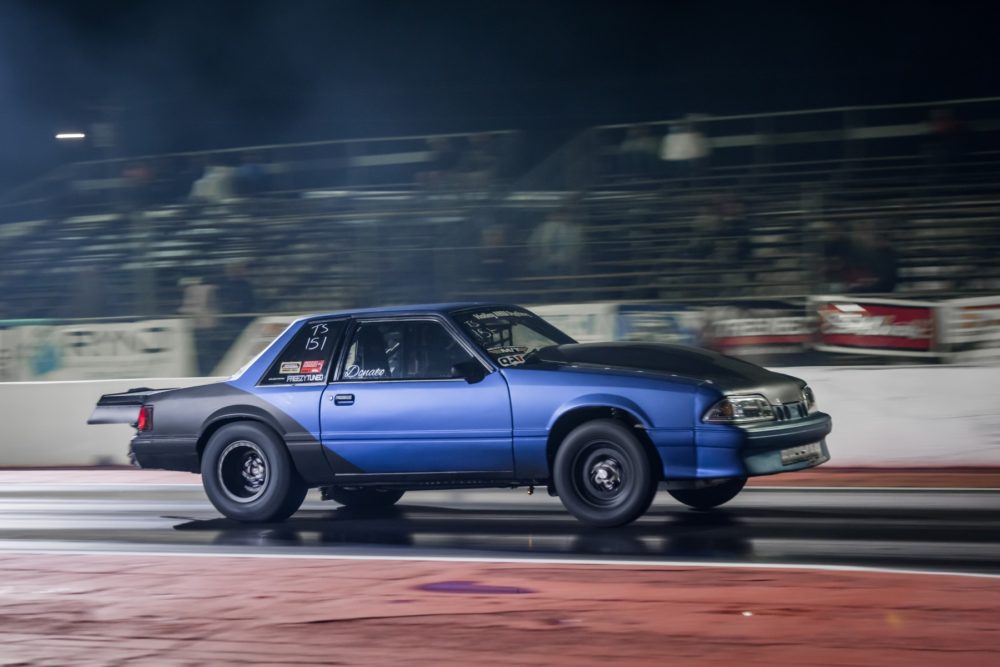 On Sunday, the ACE Racing Spring Break Shootout welcomed the quickest 16 cars from QA1 True Street for a true heads-up competition on a Sportsman ladder and 4/10 pro tree. Unsurprisingly, the rounds whittled down the hopeful drivers to the top two overall, Donato Sierchio and his ’86 Mustang versus Larry Albright and his ’91 Mustang. Both men were well into the 7-second zone, but Sierchio’s 7.367-second hit was no match for Albright’s 7.534-second run and Sierchio added another accolade to his résumé.

Continuing the legacy of the TREMEC Stick Shift Shootout specialty class, the quickest eight manually shifted Mustangs from QA1 True Street were awarded custom plaques and TREMEC jackets to recognize their accomplishments. Later, while competing on a “Chicago style” ladder, the overall heads-up eliminator was won by David Leshay of The Villages, Florida, piloting his classic ’63 Galaxie to an 11.974 at 115.36mph win over Tyler Thornburg and his ’88 Mustang.

In the Mickey Thompson Street Car Challenge presented by Whipple Superchargers category, Donato Sierchio’s blisteringly quick 7.456 at 183.89mph pass in qualifying gave him the advantage of going into eliminations from the number-one spot. His ’86 Mustang proved unbeatable once again all throughout eliminations, as he clinched his third victory of the weekend on a 7.403 at 189.42mph final run while Randy Thomas, who had qualified second with his ’10 Shelby, took home the runner-up honors with his respectable 8.379 at 167.95mph hit.

The exciting Watson Racing Cobra Jet Showdown presented by Ford Performance showcases the best of Ford’s factory performance with wild, wheels-up, action. Steve Trombley’s 0.005-second reaction time behind the wheel of his ’13 Cobra Jet earned him the top position in qualifying, and Trombley trumped the competition all through eliminations. For the last run of the weekend, Tony Jarvis who had qualified second pulled into the beams alongside him. Both men had impressive 8-second dial ins, but Trombley crossed the traps with more accuracy and earned the overall honors.

The Bracket Open class on Sunday hosted an immense number of cars, requiring eliminations to be contested through seven rounds including the finals. There, Jerry Norton took on J.C. Cole for all the marbles in an unusual final. Cole red-lit with a -0.009-second reaction time, and when Norton tried to leave the line he faced mechanical trouble. Although Norton wasn’t able to complete a pass, he still broke the beams to make his unconventional win official.

Congratulations to all of the class winners, record setters, and those who ran new personal bests on a great start to the 2021 NMRA Holley NMRA Ford Nationals season. Racing resumes on April 9-11 at Atlanta Dragway in Commerce, Georgia, with the 13th Annual NMRA/NMCA All-Star Nationals. For more information and advance tickets, visit NMRAdigital.com.