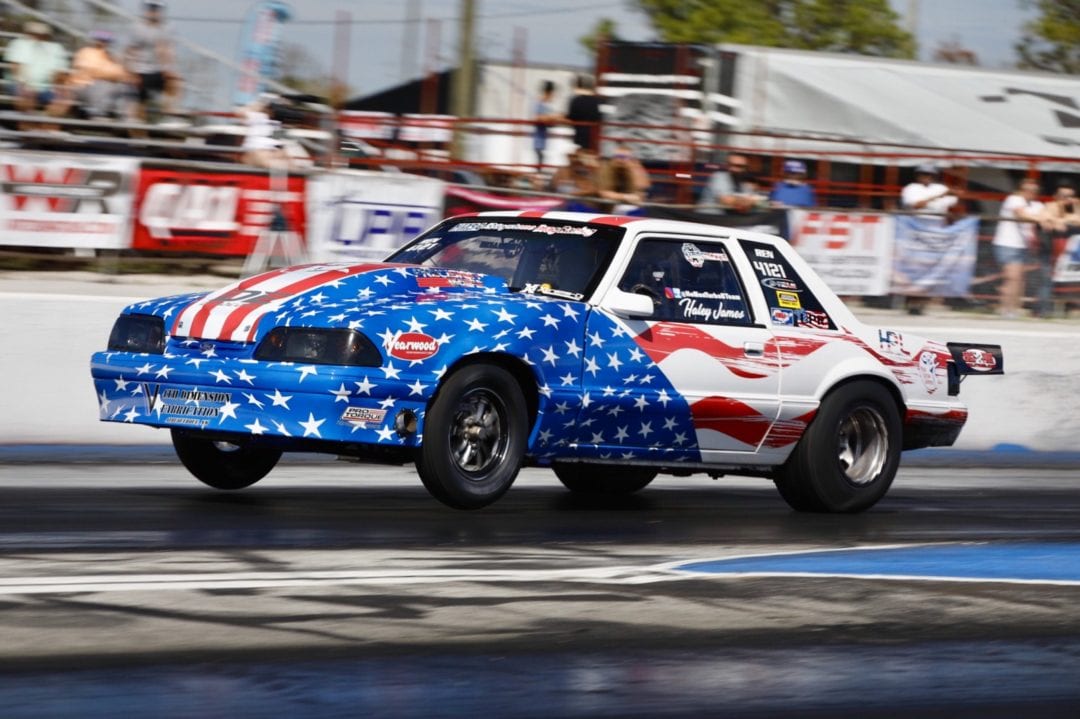 After a long off-season, racers headed south to burn rubber and take names at the 25th Annual Nitto Tire Spring Break Shootout held at the historic Bradenton Motorsports Park in Bradenton, Florida. Through four days of beautiful weather and tight competition, the racing came to a close on Sunday with the victors heading to celebrate in the exclusive Aerospace Components Winner’s Circle.

Racing in VP Racing Fuels Street Outlaw is no easy task, but Vince Palazzolo made it look like a breeze at the season opener. His boosted, 400-cube 2009 Mustang qualified in the top spot courtesy of a 4.47 at 160.62 pass. From there he went door to door, riding a bye round into the finals where he squared off against Dominic Didonato’s 2004 Mustang. Palazzolo got the jump and held the advantage to the stripe to haul in an Edelbrock Victor award on the merit of a 4.47 at 160.54 pass.

After converting her 1993 Mustang LX to run in the Edelbrock Renegade class, Haley James (pictured in feature image) rode into Bradenton from Albuquerque, New Mexico, on a mission to win the race and set the bar for elapsed times in the class. She did both. Her Hellion B-Team machine topped the qualifying sheet with a 4.81 at 146 mph. She cruised through a bye run into the finals, where she squared off with Joe Guertin’s four-eyed Fox. James got the jump at the tree and never looked back as she cruised into the Aerospace Components Winner’s Circle with a 4.82 at 146 mph rip.

Several drivers at the 25th Annual Nitto Tire Spring Break Shootout turned their top-qualifying momentum into class wins, but not in ProCharger Modified Street. Bob Cook’s Fox was the only car in qualifying with 7-second muscle, but that didn’t translate to the final round. Brad Schehr qualified hot on his heels with an 8.08 at 167.91, and as fate would have it, the duo met in the final round. There Schehr flexed his 7.95-second muscle, while Cook ran well off the pace, making for an easy victory.

After shooting to the top of the Limited Street qualifying sheet in the third round of qualifying with an 8.88 at 153 blast, Michael Ciborowski picked up in 2019 right where he left off last season. He ran consistently in that 8-second pocket through eliminations to face another 8-second player, Sondra Leslie. In one of the closest races of the weekend Ciborowski got the jump at the tree by a hundredth and held on for dear life to win with a 8.841 to Leslie’s 8.844.

Wiley veteran Tim Matherly was lurking in the third qualified spot in G-Force Racing Transmissions Coyote Stock after his 2003 Mustang ran a 10.20 at 130. He ran consistently in that zone as he climbed to the finals against number-two qualifier Clair Stewart II. Both cars lifted the front ends on the launch, but it was Matherly lighting the win light with a 10.282 to Stewart’s quicker, but losing,10.249.

A perennial favorite in Richmond Gear Factory Stock, Dan Ryntz kicked off the 2019 season in fine fashion. Having qualified in the top spot by just over a tenth with a 10.35 at 126.19, he looked liked the man to beat on Sunday. Bolstering his cause along the way was a broken competitor and a bye run, which cleared his path to the finals against Gary Windsor. Both drivers piloted 1990 Mustangs, so a Fox would win either way. Windsor chopped down the tree, but Ryntz had the power to run him down for the win on a 10.45 at 125 mph pass.

It was New Edge versus S197 in Exedy Racing Clutches Modular Muscle as number-eight qualifier Shane Williams and number-five qualifier Susan McClenaghan both ran consistently to end up in a final-round battle. It was close on the tree, but Shane Williams had a slight edge and ran closer to his dial-in to take the trip to the Aerospace Components Winner’s Circle.

Randy Conway piloted his 1985 Ranger to the win in Detroit Locker Truck & Lightning after qualifying in the seventh slot. He needed consistent passes to make it to the finals, but once he was there he ran uncontested.

Miles Wagoner returned to action in Roush Performance Super ’Stang with his gold-wrapped 2016 Mustang GT, which claimed the top qualifying spot thanks to a lightning-quick .004 reaction time. He remained quick on the tree and close to his dial-in as he battled through eliminations. That quick work on the lights paid dividends in the final round, as he chopped down the tree and took down Marvin Knack.

A familiar face took top honors in ARP Open Comp. Mr. Open Comp Larry Geddes qualified in the fourth spot and clicked off consistent passes on his way to the finals. There things got easier, as Junior McKenzie lit the red bulb and handed Geddes the win and a trip to the Aerospace Components Winner’s Circle for the first time in a long time.

It was Bill Lee Jr. that laid down the law in Race Star Wheels Ford Muscle. After qualifying is police car-styled Fairmont in the 13th spot, he used consistent work at the tree to work his way through eliminations. There he stepped up his reaction-time game and got the jump on John Butsko to take the win.

Over 130 Ford street machines ran the gauntlet in QA1 True Street, where racers and their machines must survive a 30-mile cruise followed by three back-to-back quarter-mile passes, between which they cannot open the hood. In the end, not one, but two racers tallied a 7-second average across three passes. It was Jeff Bloem who earned the trip to the Aerospace Components Winner’s Circle courtesy of 7.82-, 7.79-, and 8.09-second passes that delivered a 7.904-second average. Not only did Bloem take home the class win, but he earned the coveted first entry into the eight-car IDIDIT King of the Street eliminator that will be settled at the 21st Annual NMRA All-Ford World Finals in September.

Having clocked a 9.159 average in QA1 True Street, Yandro Ulloa narrowly missed the 9-second class win, but his was the quickest manual-trans car on Saturday, so it looked to be the car to beat on Sunday in the TREMEC Stick Shift Shootout — and it was. In the finals, his turbo Cobra squared off against Steve Shrader’s New Edge racer, which had qualified with a 9.92 average. With the staggered start anything could happen, but Shrader got antsy at the tree and lit the red bulb, so Ulloa cruised to the win with a lift. 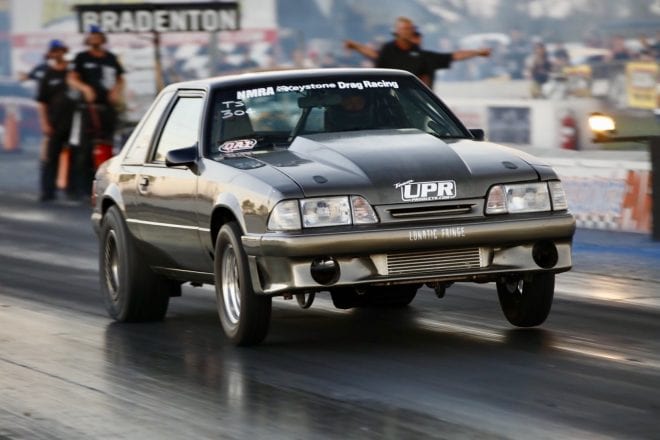 The baddest of the bad True Street cars lined up against each other in the JLT Performance Spring Break Shootout, but much like in Saturday’s competition, it was Jeff Bloem who ended up at the top of the heap running a string of 7-second passes to close out eliminations, including a final round blast of 7.62 at 168.82 to best Mike Jovanis for the win. With the victory, Bloem not only earned a gift certificate for a Deep Stage Drag Racing Brake System kit valued at around $1,000 and a trip to the Aerospace Components Winner’s Circle, and would have locked in one of the eight slots available in the IDIDIT King of the Street run in Bowling Green later this year, but since he already nabbed that spot, it will be available to an alternate at the World Finals.

Paul Roderick traveled from Maryland to compete in the Watson Racing Cobra Jet Showdown, presented by Ford Performance,with his 2013 Cobra Jet. Having qualified in the fourth slot with a .028 reaction time, Roderick ran within tenths of his dial-in during eliminations, where he trailered three competitors en route to a final-round clash with David Swanson’s 2014 Cobra Jet. The newer Cobra Jet struck just a little too soon and lit the red bulb, handing the win to Roderick, who still ran a 9.14 on a 9.15 dial-in on the free pass.

Drag racing iron man, Yandro Ulloa competed in four, yes, four classes, including the  Mickey Thompson Cobra/Terminator vs. GT500 Shootout. Opening up the class to more SVT snakes allowed his stick-shift 1998 Mustang Cobra to run with the Terminators and Shelbys, and he outran them all. Qualified in the top spot with an 8.07 at 178 mph, he ended up facing number-three qualifier, Randy Thomas, in the finals. The always consistent Thomas saved his best run of eliminations for last, but an 8.51 wasn’t enough to reel in Ulloa’s Cobra on an 8.11 at 165 mph run.

Always a strong runner in the Hellion Turbo Battle, Justin Jordan’s turbocharged Coyote machine is no stranger to success. After shaking off a broken timing chain in qualifying and sorting out loose boost hose, he sailed past the competition with mid-7-second passes when he needed it. In the finals Paul Albino’s 2004 Lightning was way off its 8-second pace, and Jordan cruised to the win with a 7.45 at 191.65 blast.

In the NMRABracket 1 and  Bracket 2 it was the Floridians who dominated. Stanley Albritton of Bradenton, Florida, benefitted from home-cooking as he powered through four rounds to take the win over another local, Jerry Norton, in the finals. Meanwhile, Deland, Florida’s Doug Poskevich soldiered through six rounds to the finals where he defeated Bill Unkel, who made the trip all the way from New Jersey.