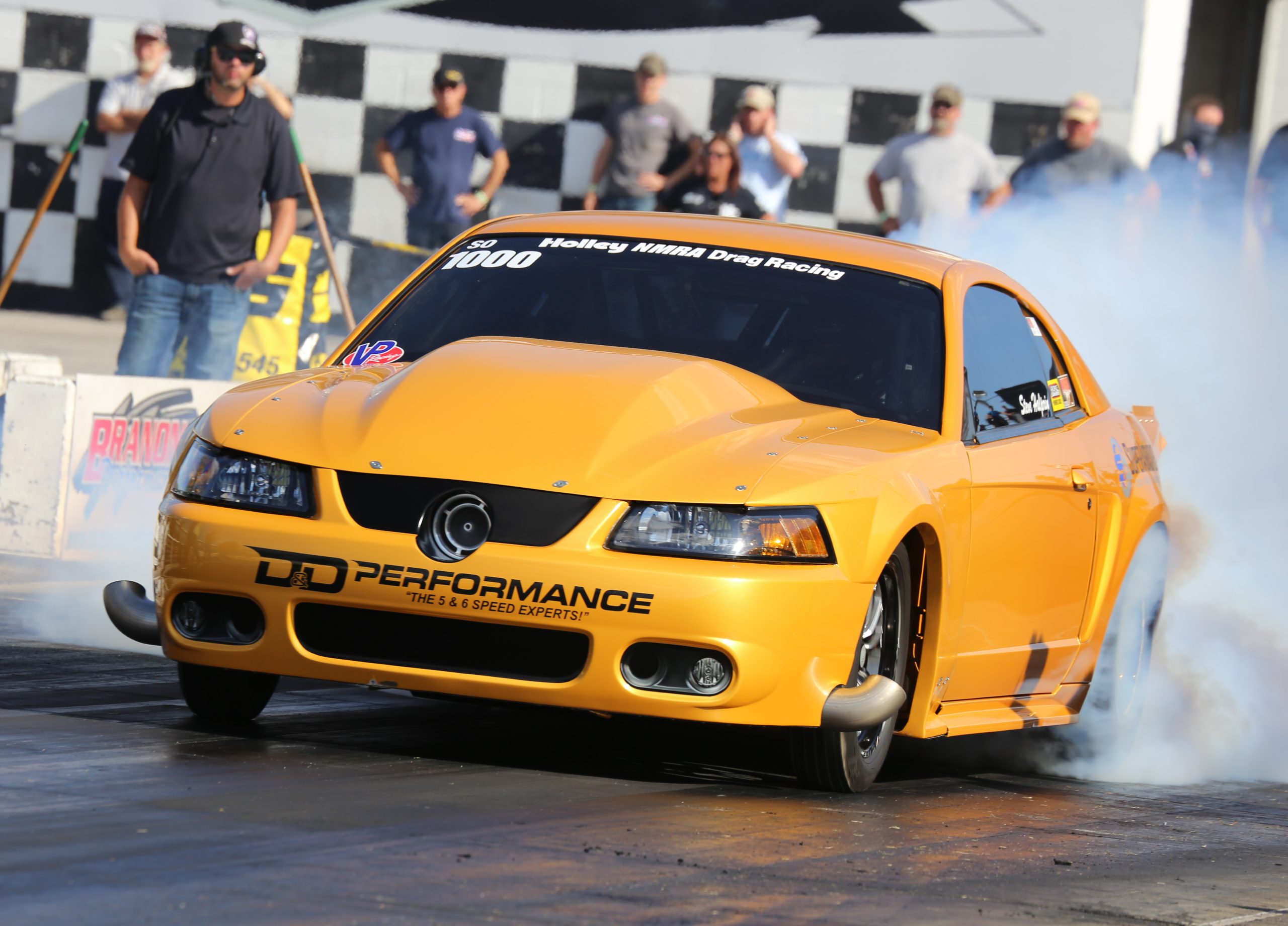 As this was the second year that Holley injected its infectious Holley Intergalactic Ford Festival into the event, event goers were treated to asphalt-ripping drifting that included Vaughn Gittin Jr. and Chelsea DeNofa, auto-crossing, burnout mayhem, a Grand Champion competition, and of course the Festival 50 Crown Victoria race put on by YouTuber Cleetus McFarland and his crew who were responsible for all sorts of shenanigans on the course. And we can’t forget the towering Bigfoot 5, which was on display for photo ops.

VP Racing Madditives Street Outlaw rookie Steve Halprin (above) made a strong showing from the beginning of the event to the end, with elapsed times regularly in the 4.3-second range. Tony Hobson took the top spot in qualifying with a 4.26, but it was Halprin who consistently charged through eliminations and met Dom DiDonato in the final round of competition. When the race was over, it was Halprin who had turned on the win light at the top end of the track, and grabbed his first NMRA event win and took his first trip to the Aerospace Components Winners Circle.

Joel Greathouse was the man to beat all weekend in Edebrock Renegade, regularly posting times in the 4.5s. He was number-one qualifier with a 4.58 and after getting to the final round, Greathouse drove to victory when Eric Bardekoff’s Mustang failed to start.

Bill Putnam has led the charge in JDM Engineering Limited Street, regularly posting the quickest times of the class. He proved that once again at Beech Bend Raceway Park with an 8.300 run to top the qualifying sheets. From there, he eliminated opponent after opponent straight through the final round, where he defeated Chad Wendel, 8.33 to 8.43.

The high-flying wheelies from the G-Force Transmissions Coyote Stock racers did not disappoint in Bowling Green, with Kevin McMullin even putting his Mustang on the bumper and then the retaining wall during eliminations. Chester Drake, though, grabbed the top spot in qualifying with a 9.98—the only other racer in the class to post a 9-second run aside from Frank Paultanis—and he would meet Drew Lyons in the final round. Lyons drilled the tree with a .006 light, and shifted what might have been all four gears of his G-Force transmission in the air, but the driving effort cost him time and Drake to stormed past him for the win, 10.02 to 10.48.

Another top qualifier and another win came from John Leslie Jr. in Richmond Gear Factory Stock, who clicked off a 10.12 to top the qualifying sheets. Leslie Jr. met Justin Fogelsonger in the final round of competition, took the starting line advantage and then took the trip to the Aerospace Components Winners Circle with a 10.15-to-10.17 victory. 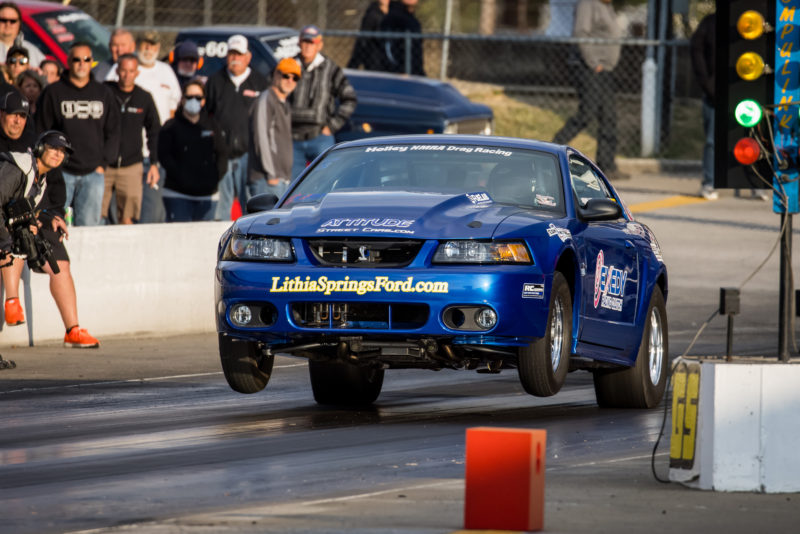 Sporting a fresh set of RC Components wheels, Exedy Racing Clutch Modular Muscle competitor Gary Parker won four elimination rounds to meet Jason Henson in the finals. Once there, Parker was quick to the tree and quick to the win light.

The ARP Open Comp class is full of tough competitors and anyone can win at any time. At Beech Bend Raceway, the final round came down to Greg Cole and Chad Scholten. Both drivers did their jobs well off the line in the battle of Fox-Body Mustangs, but it was Cole who was victorious. 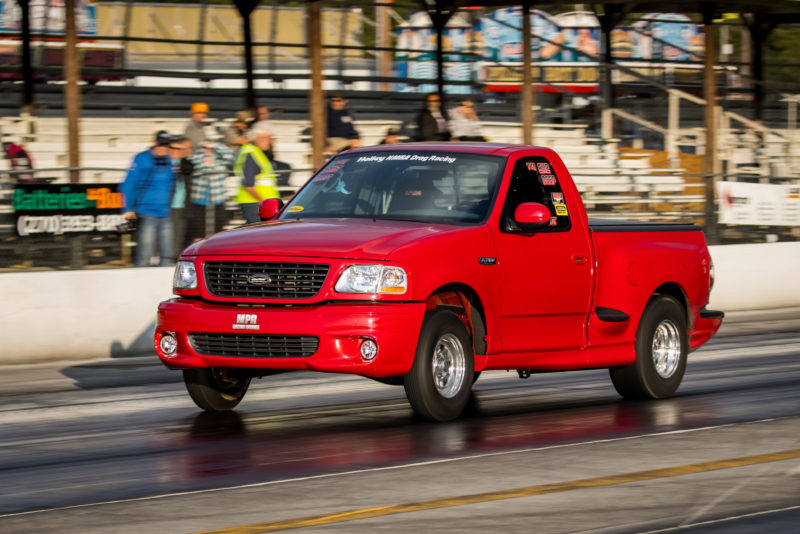 Dave Cole grabbed the top qualifying spot in Detroit Locker Truck & Lightning competition with a 0.002 reaction time, and he continued to be on the winning side of the elimination rounds until the finals, where Fred Wade got the better of him from the start to the finish to take the win.

Many NMRA racers choose to tow their cars to the track for various reasons, but ROUSH Performance Super Stang racer Kevin McKenna has proven time and again that he can drive to the track, no matter what state it’s in, and blast to competitive, low 10-second runs, and then drive it home. The Indiana resident drove to Kentucky for the final NMRA event of the season and drove to the win after defeating Pete Espeut in the final round of competition.

Fastest Street Car Magazine Ford Muscle brings a wide variety of vehicles to the class, and Clyde Dunphy’s 1972 Mustang Mach 1 is one of the coolest rides to win a round. Dunphy did far more than that at Beech Bend Raceway Park, as he defeated Llyod Mikeska in the final round of competition and celebrated in the Aerospace Components Winners Circle. 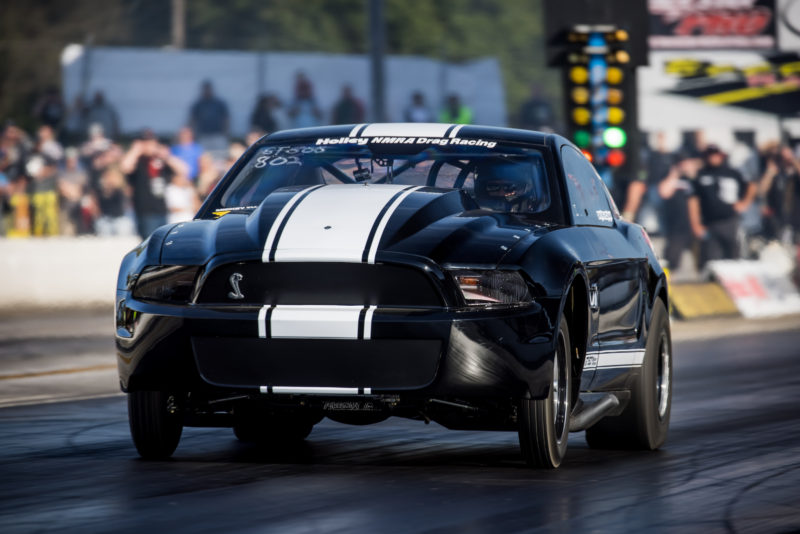 The Mickey Thompson Cobra/Terminator vs. GT500 Shootout class continues to be a favorite addition to the NMRA season opening and ending races, with racers running regularly in the 7s. Ryan Aycock was the man to beat, as he posted the quickest time in qualifying with a staggering 7.56. He would make it to the finals where he met Dwayne Hickman, who was doing well with the new supercharged combination in his Shelby GT500. Hickman ran the slower of the two times with a 7.75 to Aycock’s 7.68, but he grabbed a .223-second starting line advantage that allowed him to take the holeshot win.

Many competitors in the Hellion Turbo Battle often compete in other classes during the NMRA races that the special class is held, and Donato Sierchio was entered in both Turbo Battle as well as the King of the Street competition with his 7-second, registered for the street Mustang. Sierchio qualified on top of the Hellion Turbo class with a 7.31, and took the first of two wins at this event after defeating James McCord, 7.28 to 7.44 in the heads-up eliminator.

QA1 True Street always turns out in droves at the NMRA finals in Bowling Green, Kentucky, and this year was no exception with over 140 cars teching in. Chock full of 7- and 8-second machines, the majority of ultra quick cars bowed out early, leaving Jason Wagoner to take the overall win with an 8.964 average. Dan Saitz in his 2011 Mustang GT took runner up honors with a 9.019 average while Daniel Rosner rocketed to the 9-second win. Bob Myers banged the gears in his Mercury Capri to the 10-second win, Tim Apple took the 11-second award with an 11.043 average, and Gary Johnson went 12.005 for the 12-second prize. Leading the 13-second charge was Clint Plummer with a 13.015 average, Richard Shannon Doyle collected a 14.009 average for the 14-second win, and Brian Flanagan narrowly beat out multi-time 15-second winner Belinda Moore with a 15.026 to her 15.093 average.

The exclusive GForce Performance Engineering King of the Street brings together the overall winners from each True Street competition, along with the winner of the Spring Break Shootout and the runner up from True Street at the finals for a heads-up brawl to find out who truly is the King of the Street. The final round came down to Spring Break Shootout winner Donato Sierchio and St. Louis True Street winner Randy Thomas, with Sierchio rocketing to the win in his turbocharged Fox-Body Mustang.

TREMEC Stick Shift Shootout pits the eight quickest manually shifted cars from True Street against each other in their own speed contest. In the final round, Tim Casto defeated 2019 Stick Shift Shootout winner Mike Niehaus for the win and the trip to the Aerospace Components Winners Circle.

The Capri Club of North America has once again found a home with the NMRA, and while the Ford Capri, of which the club is based on, may not be a Mustang, the club members’ enthusiasm is just as energetic. As part of their attendance, Capri Swarm owners were able to take part in a bracket race, which was settled on Saturday with Chris Rolls taking the win over James Meredith after Meredith turned on the red light at the start.

The RacePagesDigital.com Bracket 3 featured racers from True Street as well as local bracket racers. In the final round of competition on Sunday, it was Michael Crass who drilled the tree with a .009 light and then took the win over Danny Towe, who wasn’t far behind with a .019, in the tough final round.

Because the Performance Racing Industry show, where the champions ceremony is annually held, had to be canceled for this year, NMRA champions were honored for all of their accomplishments in the special championship version of the Aerospace Components Winner’s Circle as the sun began to set on a sensational weekend and season. Please visit www.nmradigital.com and www.racepagesdigital.com, and the series’ social channels, in the days to come for stories and videos that feature the champions.

The NMRA congratulates all of its 2020 winners and champions. We’ll see you back at it next year when the next great Holley NMRA Ford Nationals season kicks off with the 27th Annual NMRA Spring Break Shootout at Bradenton Motorsports Park in Florida over the weekend of March 4-7, 2021! For more and information and advance tickets, visit www.NMRAdigital.com.