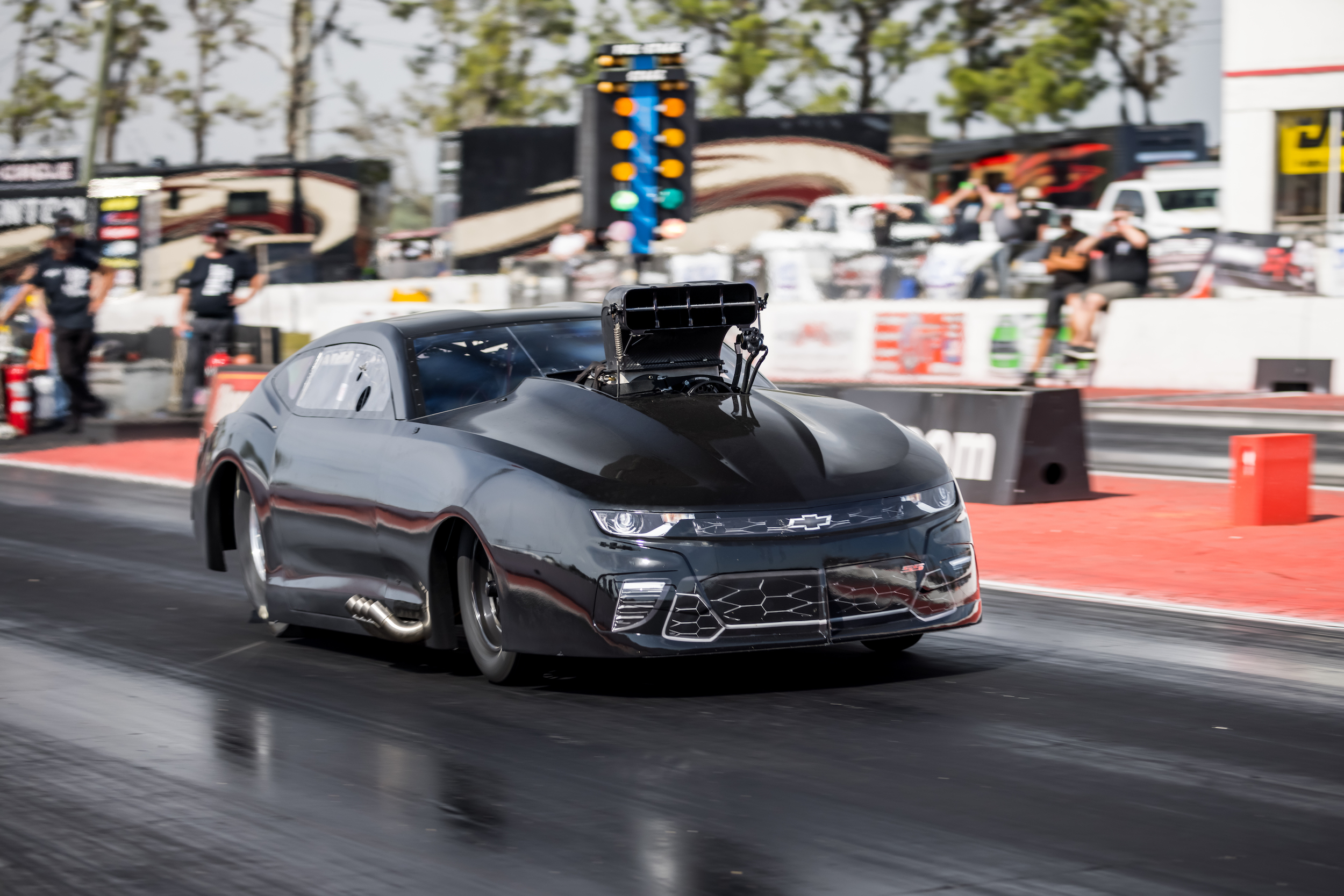 Drivers came from across the country to put the hammer down at the Whipple Superchargers NMCA Muscle Car Mayhem presented by Holbrook Racing Engines, March 18-21 at Bradenton Motorsports Park in Florida. As they pumped out horsepower on the well-prepped stage, the performances were show-stopping, and the ambition and aggressiveness was all-out. Awaiting those able to go all the way at the series’ first of six races this season was the celebratory NMCA Winner’s Circle.

In the very robust VP Racing Lubricants Xtreme Pro Mod category, the full field of 16 drivers ran between 3.63 and 3.80 in qualifying, and Randy Weatherford wheeled to a 3.63 to lead the pack. But the final round belonged to Shawn Ayers (pictured above) and Todd Tutterow, and Ayers worked for the win with a 3.58 over Tutterow, who was forced to lift to a 4.32. 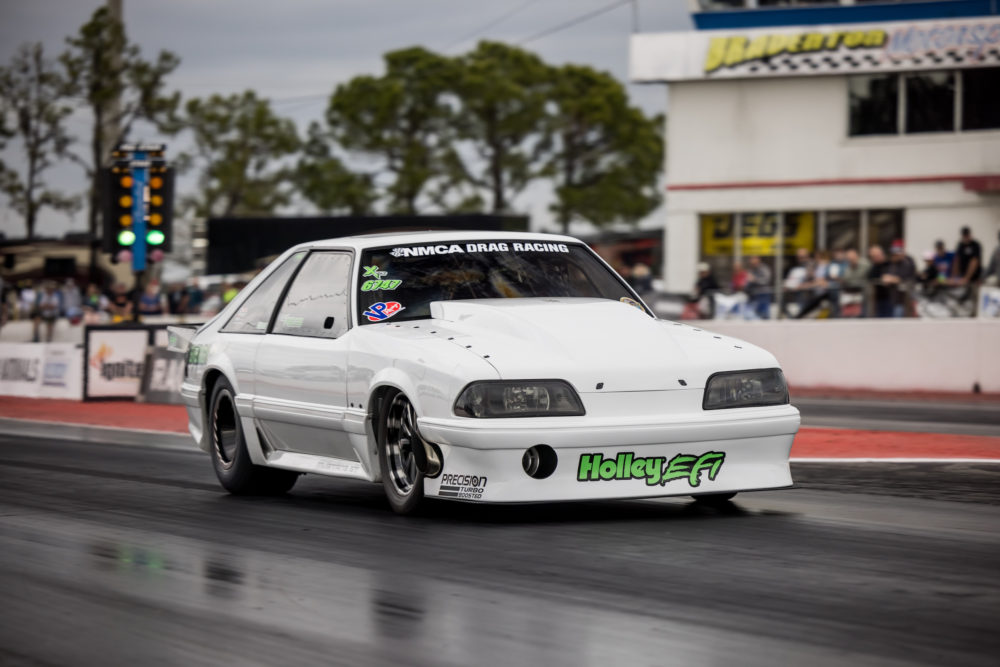 Mickey Thompson Street Outlaw returns to the NMCA roster on a full-time basis this year, and at this event, Alan Felts flew to a 4.25 to lead his fellow racers in qualifying. He then met Anthony Manna in the Mustang-vs.-Camaro final round of eliminations, and won with a 4.29 after Manna turned on the red light.

Tripp Carter trapped a 7.59 to take the lead in qualifying in Holley EFI Factory Super Cars, and four rounds later, he pulled next to 2020 category champion Bill Skillman. They had a tight race, and Skillman secured the win with a 7.56 to Carter’s 7.59.

Jake Naumann nabbed a 4.33 to set the pace in ARP Nitrous Pro Street, and while he made it to the final round of eliminations, reigning category champion Vince Khoury captured the holeshot win with a 4.47 to Naumann’s quicker 4.34.

Kirt Sanders sailed to a 4.54 to set the pace in Edelbrock Xtreme Street qualifying and he pushed through several rounds of eliminations, including the final, where he was able to wrap up the win with a 4.55 over reigning category champion Brian Keep’s 4.61.

Reigning Dart NA 10.5 champion Leonard Long led qualifying with a 7.67, and was the only driver in the category to dip into the 7.60s. He stayed strong through the weekend and took a trip to the NMCA Winner’s Circle with a 7.64 run after equally tough competitor David Theisen was forced to get out of the throttle in the final round.

In Chevrolet Performance Stock presented by Scoggin Dickey Parts Center, where five of seven drivers were in the 9s, Ronnie Hackelton hopped to a 9.86. He met up with Glenn Pushis in his new COPO Camaro in the final round of eliminations, and while Hackelton was quicker on the tree, Pushis was quicker on the top end and won with a 9.88 to Hackelton’s 9.92.

Reigning Coan Stock/Super Stock Combo champion Bill Skillman secured an 8.34 on a 10.00 index to lead qualifying, but the final round featured Mark Nowicki and Larry Hill. Nowicki nailed the win with a 9.60 on a 9.58 dial over Hill’s 9.93 on a 9.96. 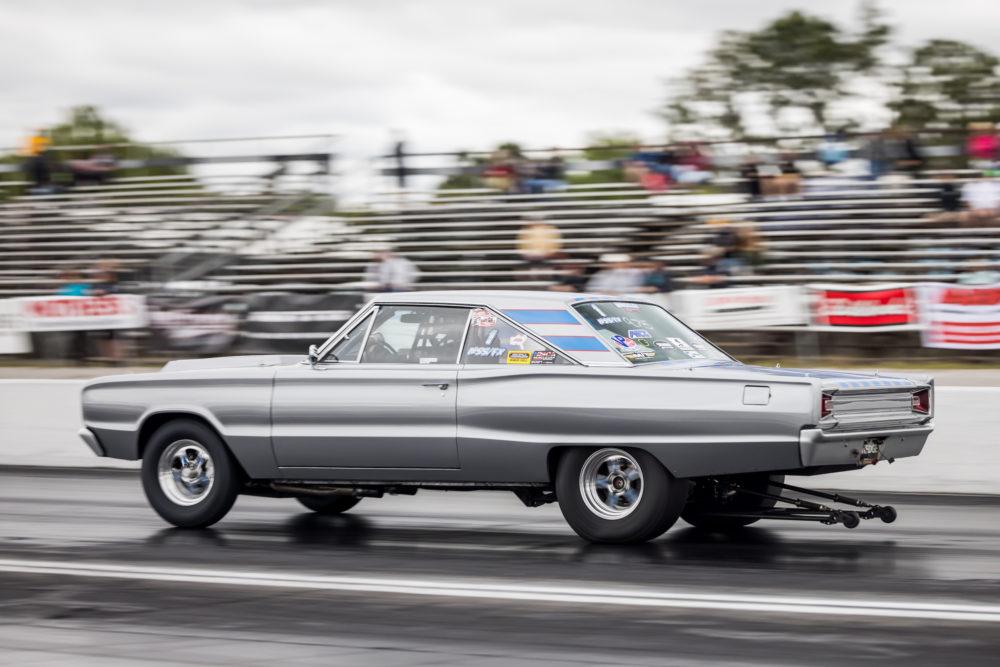 The classic cars were capturing a lot of attention in Quick Fuel Technology Nostalgia Super Stock, where Mike Davis led qualifying with a 10.001 on a 10.00 index. He made it to the final to face current category champion Brent Wheeler, and Wheeler wheeled to the win with a better reaction time and a 9.77 on a 9.75 index over Davis’ 10.00 on a 10.00.

Jeff Wallace got off the gas at 11.003 on an 11.00 index to lead qualifying in Detroit Truetrac Nostalgia Muscle, and landing in the final round of eliminations later were Brenda Blair and Bill Lee Jr. The drivers were close on the tree, and after a double breakout on the top end, Blair won with an 11.71 on an 11.75 index over Lee Jr.’s 11.44 on an 11.50.

William Wakefield recorded a .001 reaction time to lead qualifying in the always competitive MagnaFuel Open Comp, but Don Jones Jr. and Scott Williams were featured in the final round of eliminations. Jones Jr. won with a 9.37 on a 9.36 dial over Williams, who broke out with an 8.59 on 8.68.

After a 30-mile cruise, TorqStorm Superchargers True Street drivers made their way back to Bradenton Motorsports Park for three consecutive passes down-track. Landing the overall win was Larry Albright with a 7.86 average, and rolling to the runner-up finish was Jason Rollins, with an 8.53 average. Also standing out were Scott Oshinski, the 9-second winner, Trevor Ghasgow, the 10-second winner, Alan Hill, the 11-second winner, Ken Barrett, the 12-second winner and Fred Hermans, the 13-second winner. Rounding out the category were Rick Doern, the 14-second winner and Andrew Beeman, the 15-second winner.

William Wakefield was 8.76 on an 8.75 index to lead qualifying in LME Street King Presented by Chevrolet Performance, but later in the weekend, Elizabeth Claydon collected the win with a lifting 10.71 on a 10.25 dial after William Wakefield turned on the red light.

Angel Gaulden arrived at a 12.251 on a 12.25 index to lead qualifying in Proform LSX Rumble Presented by Chevrolet Performance, but running to the final round of eliminations were father and son Tim and Cody Poston. Tim took the win in the double-breakout bout with an 11.19 on an 11.25 index over Cody’s 10.40 on a 10.50 index.

The eight quickest drivers in the Dodge // Mopar HEMI Shootout made it into the Arrington Performance HEMI Quick 8 presented by Red Line Oil on the final day of the event, and taking the win was Klaus Norrhed with a 10.46 when Richard Stimson wasn’t able to complete his pass.

Bracket racers were dialed in and ready for battle in Bracket Mayhem, and six difficult rounds later, Gage Burch won with a 6.44 on a 6.43 dial over Dan Bouldry and his breakout time of 5.36 on a 5.39.

The NMCA congratulates all of the winners, and thanks all of the fans, for the on-site and online support of this longstanding and loved annual event. The action is set to amplify as NMCA and NMRA drivers trample the track together at the second event of the year for each series, the Scoggin Dickey Parts Center NMRA/NMCA All-Star Nationals presented by MAHLE Motorsport, April 8-11 at Atlanta Dragway.