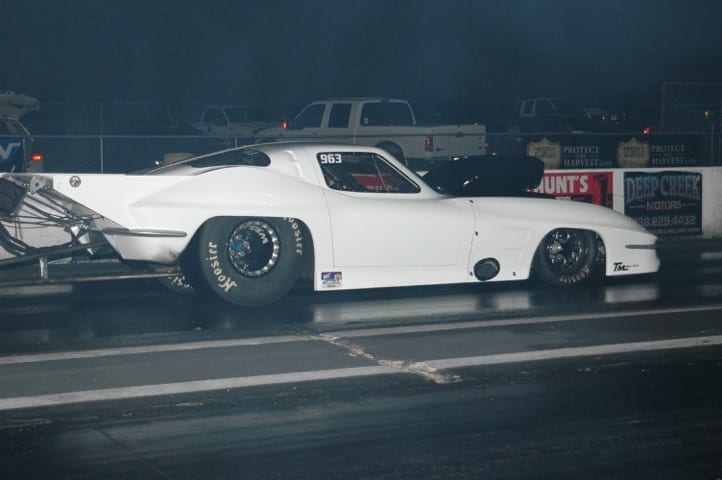 Historic Piedmont Dragway has always tried to be on the cutting edge of the evolution of our sport of drag racing so it was no surprise to those who follow the “Original Big Dog Shootout” that the final event of the 2016 season would be different, and interesting, to say the least. A first-time winner, a first-time points champ, and a first-time eliminator win for one of the most unique vehicles of our time.

The action started with warm-up hits that gave notice who came to be a serious competitor and who did not. Bubba Turner laid down a 4.08 practice hit that had everyone take notice. As first round qualifying evolved, it was clear that the cars to watch were Turner, points leader Charles Richards Jr., Mike Graham’s Nova, and the always-tough Ronnie Gardner. After two rounds of qualifying, Turner was low at a 4.059 with Richards, Gardner, and Graham in the 4.0 range.

In the first round, Gardner, Schrader, Graham, and Turner advanced with Schrader taking out the new points champ, Charles Richards, Jr. In second round activity, Turner ran high MPH with a 181.12 blast over Gardner’s 4.17 and Graham gave away a 4.033 to the red bulb, advancing Schrader to the finals. In the final, Schrader did not move at the green as Turner overcame a season of frustration to record a winning 4.05 at 180.96 to win his first Big Dog Shootout of the season and with the new rules package.

The evening of firsts included a win for Jimmy Green and wife, Paula. This is the first win for the gentleman known as the “Rentman”. Charles Richards, Jr. won the points having previously won the Renegade title on two occasions. But there was another first. No one saw this coming as young Charles Corriter brought his Tesla in on a rollback and proceeded to win the 7.49 Real Street eliminator giving the all-electric vehicle its first win,in a major drag racing eliminator program. To accomplish this, Corriter took out Jeremy Ritter and the always-tough Kyle Shipmon. Other winners for the evening included Mike Sigmon over Bill Ritts in Mickey Thompson 6.00 eliminator and Carrie Long winning Outlaw Door Slammer over Jeff Bowman’s Firebird.

This has been quite a season of change with a totally new rules package that has seen 11 to 13 cars show up to qualify for the eight spots and the trophy everyone wants, the porcelain dog. We all look forward to next season so don’t forget to check out the Piedmont Dragway app, the website and the Facebook page to keep up with all the happenings at Ron Senecal’s “ DoorSlammer Capital of the World”, historic Piedmont Dragway.