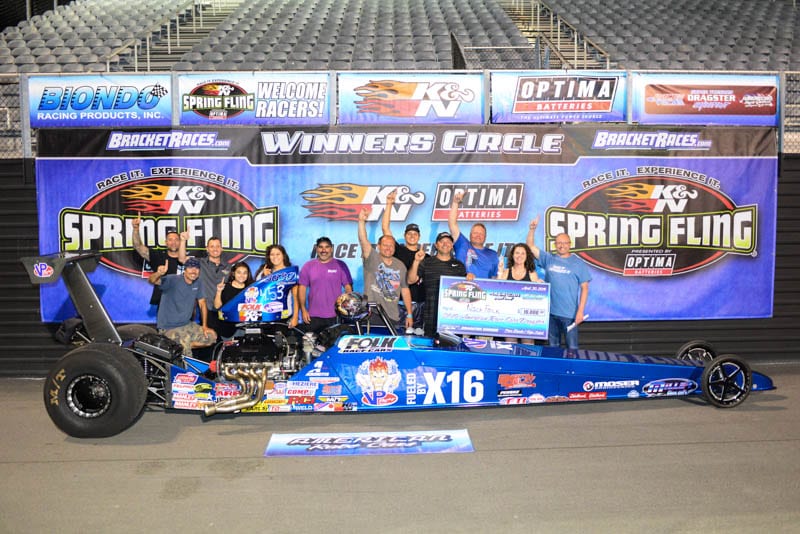 For the third year, the K&N Spring Fling presented by Optima Batteries has made its presence known at Galot Motorsports Park in North Carolina. A pre-entered field of racers flocked to the gorgeous track which began life in 1957 as Dunn-Benson Drag Strip. GALOT Racing owner Earl Wells purchased the track in 2013 and completely renovated the facility raising it to one of the finest in the country.

Super Tuesday opened up with tech inspection and a Test & Tune session along with the Race Tech/American Race Cars Dragster Shootout where a limited field of 32 racers vied for a brand-new car for both the winner and runner-up, with the winner receiving his first choice of which brand.

In that quarterfinal round, Carr turned on the red-light to advance McCarty and his door car. Labbous took out Verdi, Duke hung tough besting Brannon and finally, Folk took out McDaniel. Two door cars, two dragsters and in the semifinals it will be just that, door cars versus dragsters with all looking for one more win light to win a new dragster. A loss in the semifinals earns only $500, but a win; well we know what that’s for.

The man who did so well two weeks ago at the Spring Fling Million in Las Vegas, the man who already has four Spring Fling trophies over the years to his credit, John Labbous is starting the week off right here with a semifinal win utilizing a .007 package against Duke. In the other half, Folk, a former NHRA world champion himself, used a better reaction time to defeat McCarty.

But now it was the final. Two former NHRA world champs. Two great names in our sport facing off to see which one gets the choice of either an American Race Cars dragster or one built by Race Tech. Only .003 separated them in reaction time, but it was Labbous running out by .001 while Folk was dead-on with a “6” for the win. And in a hilarious moment, both men swapped cars and drove each other’s back to the winner’s circle celebration where Folk chose the American Race Car leaving the Race Tech for Labbous.

Also beginning today with eliminations in the Dragster Shootout, MotorManiaTV.com was on hand to stream all of the action over the Internet thanks to Hoosier Tires and JEGS, as they will be all week. For more info and results, visit www.bracketraces.com.