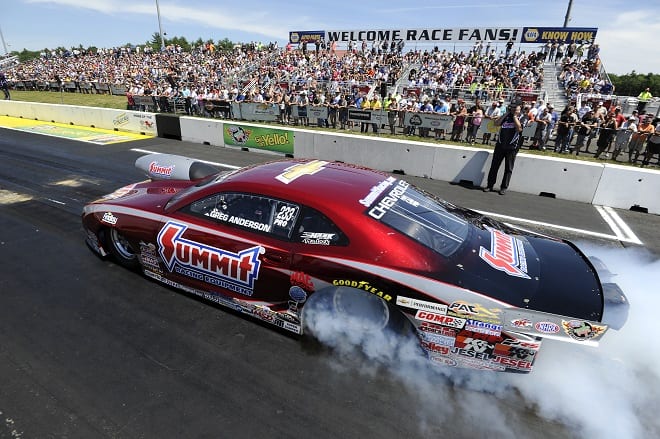 John Force picked up his second Funny Car win of the season Sunday at the NHRA New England Nationals at New England Dragway.

Tony Schumacher (Top Fuel) and Greg Anderson (Pro Stock) also took home victories in their respective categories at the NHRA Mello Yello Drag Racing Series event near Boston. All three winners of the event rank as the active wins leaders in their classes. 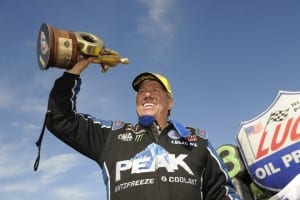 Force, a 16-time Funny Car world champ, raced to a winning performance of 4.160 seconds at 309.49 mph in his PEAK Antifreeze Chevy Camaro SS, defeating No. 1 qualifier Tommy Johnson Jr. in the final. The victory was Force’s 143rd of his career, 99 ahead of second place Ron Capps. The win was Force’s first at New England Dragway following a runner-up at this event in 2013. With the win, Force now has a victory at every track that has appeared on the NHRA Mello Yello Drag Racing Series circuit.

“I had a great day,” said Force, who moves to third in points with the win. “I’m not going out of racing any time soon, but I was going to win at New England. I almost did the first year and this year I finally did.”

Johnson Jr. was appearing in his first final of the season. The No. 1 qualifier for the weekend, Johnson Jr. leaves Epping still searching for his first win since Bristol last June. He is now fifth in Funny Car points.

In Top Fuel, Schumacher went the distance as the No. 1 qualifier, running a 3.809 at 321.35 in his U.S. Army dragster during a final round win over three-time world champ Larry Dixon, who finished in 3.881 at 319.60 in his C&J Energy Services dragster. Schumacher, the defending and eight-time world champ, secured his second win of the season, second in a row at Epping and 79th of his career. The victory propels Schumacher to second in points. 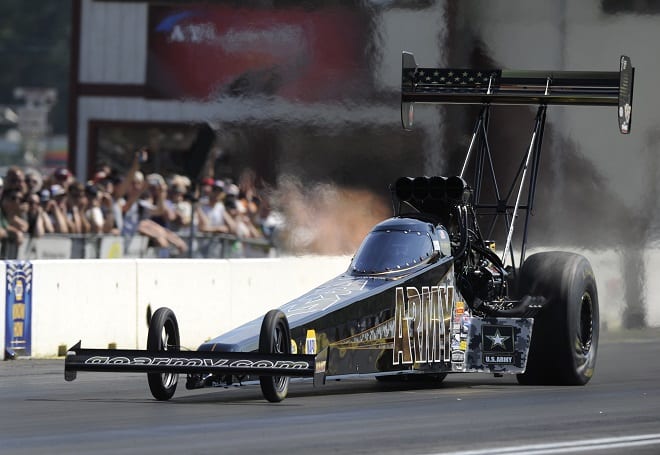 “[Crew chiefs] Mike [Green] and Neal [Strausbaugh] did an outstanding job today,” said Schumacher. “I felt like I drove well today. Together as a team we went out and won. We did a great job, what a battle.”

Dixon, whose last win came in 2011 at Phoenix, was appearing in his third final of the season and first at New England Dragway. He is now fifth in points.

Anderson drove his Summit Racing Chevy Camaro to a 6.512 at 214.72 in the final round, defeating 2012 Pro Stock world champ Allen Johnson, who trailed with a 6.530 at 213.50 in his Magneti Marelli Dodge Dart. The win was Anderson’s third of the season and 77th of his career. Anderson, a four-time world champ who won last weekend at Englishtown while also beating Johnson in the final, has now won back-to-back races for the first time since 2011.

“My car has been fantastic,” said Anderson, who is now three for three in final rounds this season. “I’m absolutely having a ball. I’ve got a great race team behind me and they are doing a great job. I can’t wait to go to the next race.”

Johnson appeared in his second consecutive final of the season and he moved to fifth in points with the runner-up finish.