NHRA Mello Yello Drag Racing Series teams will return to Atlanta Dragway this weekend for the completion of the rain-delayed Summit Racing Equipment NHRA Southern Nationals. The seventh round of the 2013 season was put on hold one week ago after heavy rains forced NHRA officials to postpone the race until this weekend, May 10-11.

The two-day race weekend will resume with two qualifying sessions on Friday, May 10 at 2 and 4 p.m. Eliminations will begin at 11 a.m. on Saturday May 11. Steve Torrence (Top Fuel), Ron Capps (Funny Car) and Greg Anderson (Pro Stock) are the defending winners of the NHRA Mello Yello Drag Racing Series event that will be televised on ESPN2HD.

John Force (above), the 15-time NHRA world champ who has won at Atlanta Dragway seven times during his career, is really pumped up to give a spectacular show to the fans in the area who have waited patiently for two weeks. 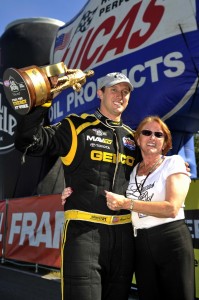 Morgan Lucas with his mother, Charlotte

“Having rain postpone us really hurts because we want to race,” said Force, driver of the Castrol GTX Ford Mustang. “It is what we do. We want to hear the roar of the crowd. I hope all the fans come back Friday for qualifying and then the race on Saturday. We will put on a great show and I am looking to go rounds.”

Top Fuel driver Morgan Lucas, pilot of the GEICO/Lucas Oil dragster who earned his first career victory at Atlanta Dragway in 2009, says a victory on Saturday would become a very special present on the following day.

“It’s going to be a unique opportunity for all of us to try and win a Wally as a Mother’s Day gift,” said Lucas, whose mother, Charlotte, often competes in NHRA’s Super Comp category. “We’ll come back with the same positive attitude and try to win some rounds.”

With only two qualifying sessions available to get into the 16-car fields, most drivers know they will need to be on their toes for Friday’s racing.  Veteran Funny Car driver Tim Wilkerson says a premium will be placed on making a solid run down the track on the first qualifying attempt so his Levi, Ray & Shoup Ford Mustang team doesn’t enter the final session on the bubble, frantically trying to get into the starting lineup for Saturday’s eliminations. 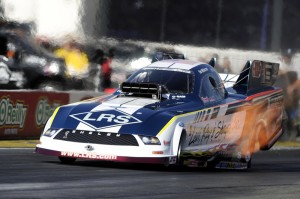 “Only getting the two qualifying runs is always tough, but that’s the way it’s been at the last two races and we’ve done okay, so I’m not complaining,” Wilkerson said. “We’re all in the same boat on that deal.”

In Top Fuel, Tony Schumacher is again a championship contender early in the season after securing two wins, in Phoenix and Las Vegas, at the controls of his U.S. Army dragster. Antron Brown and Spencer Massey have had success this year as well and will be aiming to top their Don Schumacher Racing teammate in the standings. Al-Anabi Racing’s Shawn Langdon, Doug Kalitta, Houston winner and local favorite Bob Vandergriff, and Clay Millican will challenge for the win as well.

The extremely competitive Funny Car category is led by two-time season winner Cruz Pedregon and his “No-Name” crew.  Courtney Force also has proven to be a tough challenger on the strength of two final-round appearances and one win in Pomona. Others to watch in the 8,000-horsepower category are Four-Wide Nationals winner Matt Hagan, defending event winner Capps and defending world champion Jack Beckman.

The Pro Stock category is once again shaping up to be a tight battle with two-time Atlanta winner Mike Edwards holding the series lead over defending world champ Allen Johnson. Jeg Coughlin, Vincent Nobile, Shane Gray and Erica Enders-Stevens are also among the pre-race favorites in the 200-mph factory hot rod category.