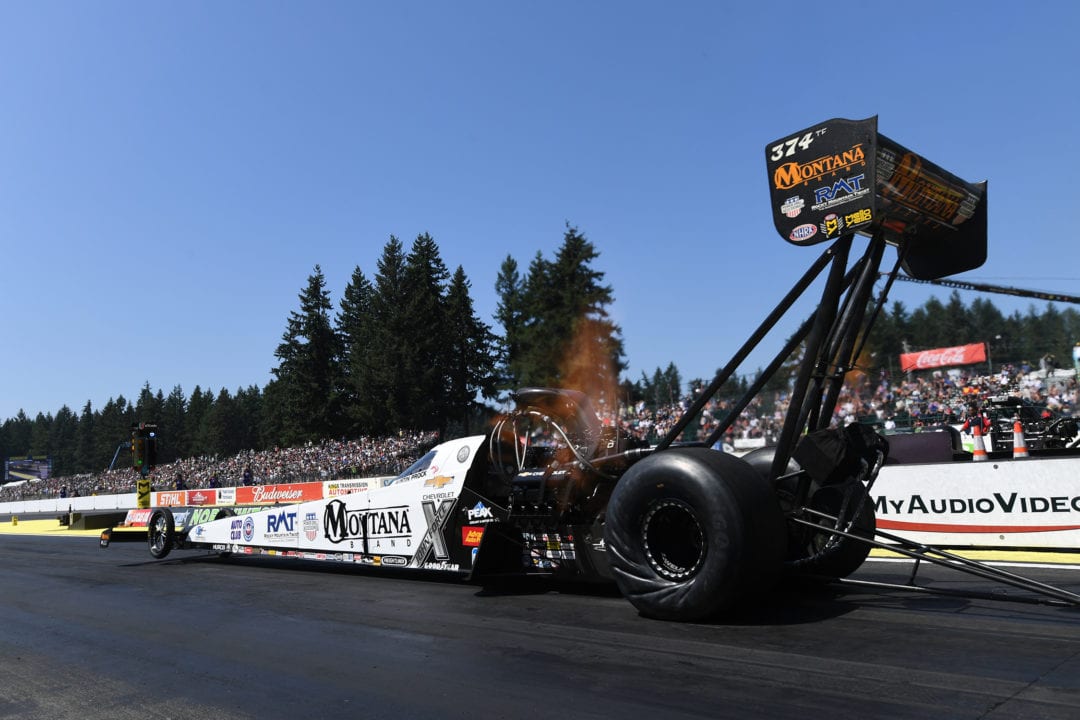 For the first time since 2019, the NHRA Camping World Drag Racing Series is headed back to Pacific Raceways, as the famed NHRA Western Swing will once again conclude with the 34th annual Flav-R-Pac NHRA Northwest Nationals on July 29-31.

It is the 13th of 22 races during the 2022 season and anticipation is high for NHRA’s return to Seattle. Nestled in the Paciﬁc Northwest in the shadow of majestic Mount Rainier and surrounded by horsepower-aiding trees that emit tons of power-enhancing oxygen, Pacific Raceways has provided a terrific backdrop for teams and race fans for more than three decades.

After three years away, fans will get the opportunity for another weekend of incredible 11,000-horsepower, 330-mph thrills starting with qualifying action on Friday and Saturday and then eliminations on Sunday. The track has been home to several historic moments over the years, including John Force’s 150th win in 2019, setting the stage for what should be an incredible return to racing in 2022.

Prock’s first career victory in the Top Fuel ranks came at Seattle during the 2019 race when he beat four-time defending world champ Steve Torrence in the final round. Prock has become one of the sport’s rising stars and will look to get back in the win column at Pacific Raceways, but victories haven’t come easy in Top Fuel this season. In one of the most competitive years ever in the class, Mike Salinas is the current points leader on the strength of four wins. Other top stars to watch include Brittany Force, a three-time race winner this year, Torrence, Justin Ashley, who has two wins this year, Antron Brown and Tony Schumacher, who each have four wins at Seattle, Denver winner Leah Pruett, Doug Kalitta, and Josh Hart.

In Funny Car, Force made history at Pacific Raceways in 2019 with his 150th career win. The 16-time Funny Car world champ enjoyed a memorable celebration after the historic win and the legendary driver returns to Seattle looking for his second win this season and the 10th in his career at the track. Nobody has won more than Force at Seattle but getting another won’t be easy facing off with the likes of teammate and points leader Robert Hight, Tim Wilkerson, who has three wins in Seattle, defending world champ Ron Capps, Matt Hagan, who won the race in 2013, J.R. Todd, Cruz Pedregon, Bob Tasca III, and Alexis DeJoria.

Pro Stock’s Hartford had a thrilling moment at the last Seattle race in 2019, knocking off Greg Anderson in the final round to keep the all-time wins leader from sweeping the Western Swing. Hartford has current momentum, too, winning in Denver as his season continues to get on track. He’ll try for another Seattle win against a talented group that includes points leader Erica Enders, who has five wins in 2022, Anderson, who is a win away from his 100th career victory, two-time race winner this season Aaron Stanfield, local native Dallas Glenn, rookie Camrie Caruso, Troy Coughlin Jr., Mason McGaha, and Kyle Koretsky.

The event also will feature thrilling competition in the NHRA Lucas Oil Drag Racing Series, which includes some of the sport’s top drivers, as well as Street Legal exhibition runs. The race also features the NHRA Summit Racing Jr. Drag Racing League Shootout, with eight young drivers competing for the win. The final round will take place on Sunday and will be featured during the FOX broadcast.

The Total Seal Tech Talk Engine Seminar will take place at Matt Hartford’s Pro Stock Car Pit at 1 p.m. on Friday and 10 a.m. Saturday. For autograph-seeking fans, they can attend an autograph session featuring Toyota drivers that will take place at 10:30 a.m. on Saturday at the Toyota Display.

Race fans at Pacific Raceways can enjoy the special pre-race ceremonies that introduce and celebrate each of the drivers racing for the prestigious Wally on Sunday and includes the fan favorite SealMaster Track Walk. The final can’t-miss experience of any NHRA event is the winner’s circle celebration on Sunday after racing concludes, where fans are invited to congratulate the Flav-R-Pac NHRA Northwest Nationals event winners.

As always, fans also get an exclusive pit pass to the most powerful and sensory-filled motorsports attraction on the planet in Seattle. This unique opportunity gives fans a unique chance to see teams in action and service their hot rods between rounds, get autographs from their favorite NHRA drivers, and more. Fans can also visit NHRA’s popular Nitro Alley and Manufacturers Midway, where sponsors and race vendors create an exciting atmosphere that includes interactive displays, simulated competitions, merchandise, food, and fun for the entire family. The new Pep Boys midway display will include tire change challenges, oil change challenges, a slot car track, and much more, adding even more excitement to the midway.

To purchase tickets to the Flav-R-Pac NHRA Northwest Nationals, fans can visit www.nhra.com or call 800-884-6472.