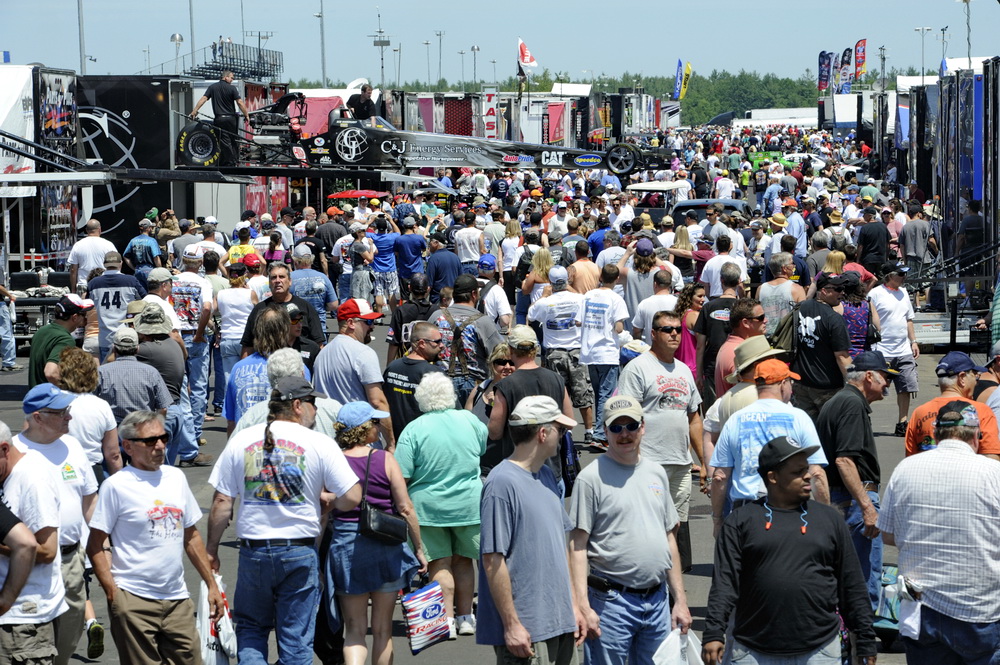 The 2015 NHRA Mello Yello Drag Racing Series schedule was announced Aug. 25, by NHRA officials. The 24-race NHRA Mello Yello Series will make its traditional stops across the country and remains the most geographically dispersed U.S. touring series in all of motorsports, reaching fans with its unique brand of high-horsepower entertainment from New England to California, Washington to Florida, and all points between.

Highlighting the schedule once again in 2015 will be the Chevrolet Performance U.S. Nationals, the world’s most prestigious drag race, at Lucas Oil Raceway at Indianapolis, Labor Day weekend, Sept. 2-7.

The season again will open and close at famed Auto Club Raceway at Pomona in Southern California. The season kicks off at Pomona with the NHRA Winternationals, Feb. 5-8, and closes at the historic dragstrip with the final race of the Mello Yello Countdown to the Championship playoffs, the Auto Club NHRA Finals, Nov. 12-15.

Following the season opener, the series returns to Wild Horse Pass Motorsports Park near Phoenix for the CARQUEST Auto Parts NHRA Nationals, Feb. 20-22. NHRA teams will traverse the country to make it to the traditional East Coast opener at Florida’s Auto-Plus Raceway at Gainesville for the Amalie Motor Oil NHRA Gatornationals, March 12-15.

In May, the teams will travel to Atlanta for the Summit Racing Equipment NHRA Southern Nationals, May 15-17, and then on to Topeka, Kan., for the NHRA Kansas Nationals at Heartland Park Topeka, May 22-24.

After a week off, the NHRA Mello Yello Series will make two more stops before the Western Swing. A massive Fourth of July celebration is guaranteed for the Summit Racing Equipment NHRA Nationals, July 2-5 at Norwalk, Ohio. The summer racing parade will continue with the O’Reilly Auto Parts Route 66 NHRA Nationals, which will move to July 9-12 at Route 66 Raceway near Chicago.

The famed Western Swing will begin one week later in 2015 and kicks off with the Mopar Mile-High NHRA Nationals at scenic Bandimere Speedway in Denver, July 24-26.  From there, the teams will trek farther west stopping in Northern California for the NHRA Sonoma Nationals (July 31-Aug. 2) at Sonoma Raceway before finishing the Western Swing near Seattle at Pacific Raceways with the O’Reilly Auto Parts NHRA Northwest Nationals, Aug. 7-9. NHRA teams will then take another week off before heading to Brainerd, Minn., for the Lucas Oil NHRA Nationals, Aug. 20-23.

The last race in the NHRA Mello Yello Drag Racing Series regular season at which the final positions for the NHRA Mello Yello Countdown to the Championship can be secured will be the prestigious Chevrolet Performance U.S. Nationals at Lucas Oil Raceway at Indianapolis, Labor Day weekend, Sept. 2-7.

The AAA Texas NHRA FallNationals at the Texas Motorplex near Dallas (Oct. 15-18) will set the stage for the final two Countdown playoff races.  The season concludes out West with the NHRA Toyota Nationals in Las Vegas (Oct. 29-Nov. 1) and the Auto Club NHRA Finals at Auto Club Raceway at Pomona, where world champions will be crowned in Southern California Nov. 12-15.

The Pro Stock Motorcycle class will compete in a 16-race schedule, with six of those races in the NHRA Mello Yello Countdown to the Championship. The location of the 16th bike race will be announced at a later date.