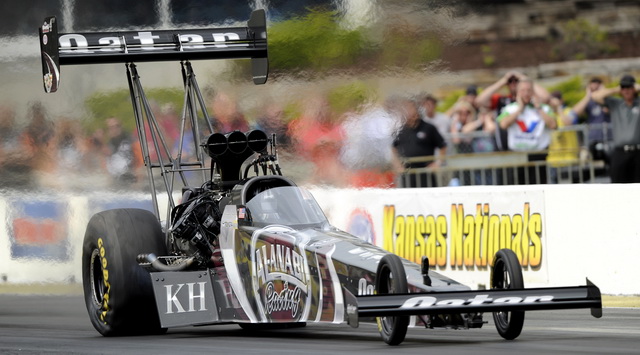 NHRA announced its 2014 Mello Yello Drag Racing Series schedule Aug. 29, which includes a return to racing Memorial Day weekend with the NHRA Kansas Nationals (above) at Heartland Park Topeka, May 23-25.

Also in 2014, NHRA will celebrate the 60th anniversary of the biggest and most prestigious event in all of NHRA Drag Racing, the Chevrolet Performance U.S. Nationals at Lucas Oil Raceway at Indianapolis, Labor Day weekend, Aug. 27-Sept. 1, 2014.

Another tradition-rich event will celebrate its 50th anniversary: the Automobile Club of Southern California NHRA Finals at Auto Club Raceway at Pomona (Calif.). That race will again provide the stage for the season finale, Nov. 13-16.  NHRA will be announcing activities, events and promotions for both milestone anniversary races that will make each one a must-attend event for NHRA fans.

The 24-race NHRA Mello Yello Series will make its traditional stops across the country and remains the most geographically dispersed U.S. touring series in all of motorsports, reaching fans with its unique brand of high-horsepower entertainment from New England to California, Washington to Florida, and all points between.

The Pro Stock Motorcycle class will compete in a 16-race schedule, with six of those races in the NHRA Mello Yello Countdown to the Championship.

ESPN2 and ESPN2HD, a part of the ESPN network, the worldwide leader in sports, will again provide exclusive television coverage on a same-day basis of all NHRA Mello Yello Drag Racing Series events featuring action from qualifying rounds Saturday and eliminations Sunday.