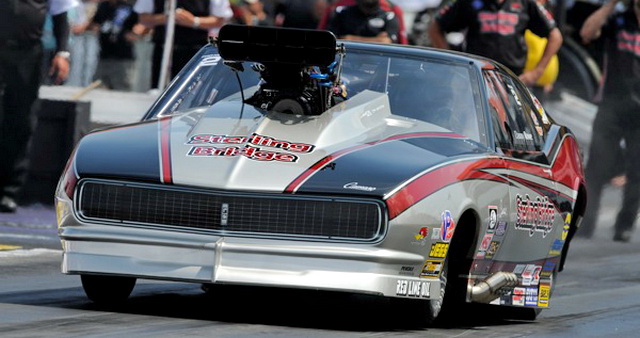 The NHRA announced Nov. 15, the 2013 Pro Mod Series schedule, as well as changes to the series for 2014.  ProCare Rx owner Roger Burgess will not sponsor the Pro Mod Series after the 2013 season.

“We are appreciative of Roger Burgess’ sponsorship of the Pro Mod class since 2010,” said Tom Compton, president, NHRA.  “We look forward to what will surely be an exciting 2013 season.”

The 2013 NHRA Pro Mod Series will once again feature 10 races; be contested at the same venues as 2012; feature 16-car fields; and provide world championship points and an overall purse, including event purses and a year-end bonus fund, totaling $470,000.

The Pro Mod season will open with the 44th annual NHRA Gatornationals, at Auto-Plus Raceway at Gainesville (Fla.), March 14-17.  From there, the series will make the first of two visits to zMAX Dragway in Charlotte, N.C., April 19-21, as part of the NHRA Four-Wide Nationals.  The 250-mph machines will compete in the traditional two-wide configuration, however.

After Charlotte, the NHRA Pro Mod Drag Racing Series returns to the O’Reilly Auto Parts NHRA Spring Nationals in Houston (April 26-28), the Toyota NHRA Summernationals in Englishtown, N.J. (May 30–June 2), the Ford NHRA Thunder Valley Nationals in Bristol, Tenn. (June 14-16), and concludes the first part of the season with a stop at the Summit Racing Equipment NHRA Nationals in Norwalk, Ohio, July 4-7.

(Note: will not race four-wide)