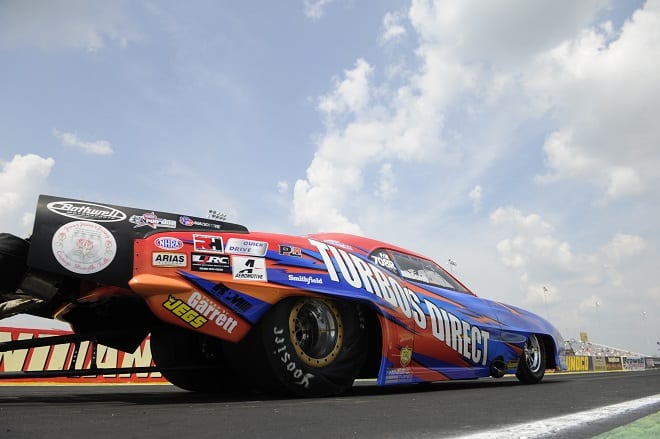 Rick Snavely raced to his first career win Monday during the NHRA J&A Service Pro Mod Drag Racing Series portion of the Chevrolet Performance U.S. Nationals, the seventh of 10 events on the Pro Mod schedule. This weekend’s Pro Mod racing at Lucas Oil Raceway at Indianapolis was presented by JEGS.

“There are no words to explain it,” Snavely said. “Everybody just worked their butts off constantly. All the parts and pieces just came together. I’m still excited that I even came here. I’m sure it’ll set in but it’s unbelievable.”

Snavely, competing in only his second career NHRA Pro Mod race, sped past Bill Glidden, Steve Matusek and reigning and two-time world champion Rickie Smith in the earlier rounds. He entered eliminations as the No. 3 qualifier.

Through seven events, the NHRA J&A Service Pro Mod Series has featured seven different winners. Bob Rahaim won the season-opening race in Gainesville, Fla. in mid-March while Don Walsh raced to victory in the series’ second event in late April in Houston. Kenny Lang won the third Pro Mod event at Atlanta Dragway in early May and Glidden raced to his first career victory at the season’s fourth event in Englishtown, N.J. Veteran racer Smith won the series’ fifth event in Bristol, Tenn. while Janis won the most recent event in Norwalk, Ohio in early July.

The NHRA J&A Service Pro Mod Series will make its next stop in Charlotte, N.C., for the eighth annual NHRA Carolina Nationals, Sept. 18-20.