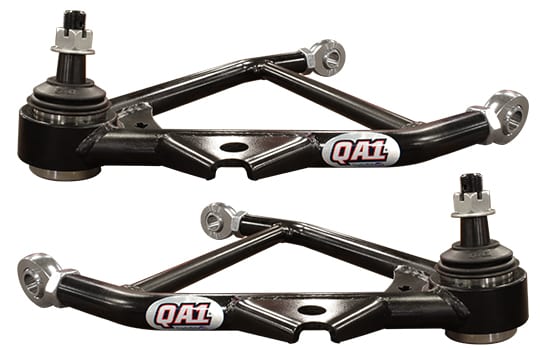 QA1 offers both street and race control arms for Mustangs, both of which utilize a tubular design and work with QA1 coil-over struts. These lightweight tubular arms offer a 50% reduction in weight over stock control arms, improving handling and allowing the suspension to react quickly. The new race control arms utilize QA1’s exclusive X Series chromoly rod ends and are designed for drag racing, pro-touring and hard core street applications. They have been redesigned to include sway bar mounts for those who choose to run a sway bar.

QA1’s full-vehicle suspension kits for 1979-2004 Mustangs have also been updated to include these control arms where applicable. Designed with either drag racing or performance handling in mind, these kits are available in up to three levels of performance and feature parts that work together to achieve specific performance goals. All QA1 control arms, K-members, tubular suspension components, aluminum shocks and steel struts are made in their Lakeville, Minnesota facility.