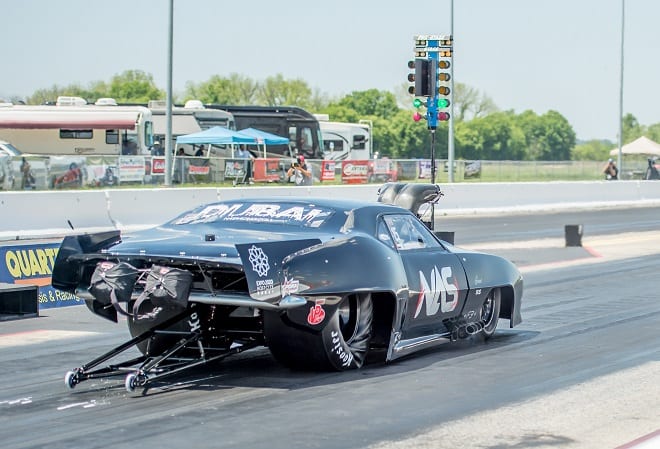 Just three races into the Professional Drag Racers Association’s sophomore tour and Mustafa Buhumaid has already been to two Pro Extreme finals, success that has given him the lead in Championship points. Buhumaid, who is the Executive Director of the NAS Racing Team, scored the first Pro Extreme victory of the year at the season opener in Ennis, Texas. He followed that up with a runner up finish at the PDRA Spring Nationals in Rockingham, North Carolina.

It was just one year ago that Buhumaid attended Frank Hawley’s Drag Racing School to earn his professional license and begin competing with the PDRA. The fact that he only has a handful of races under his belt makes his early points lead that much more impressive. Buhumaid’s promising career is accelerating quickly, and it’s not surprising when you consider the team’s dedication and commitment to their racing program. While most teams balk at a 20 hour drive or 3 hour flight, NAS Racing must first conquer 15 hours of air travel from their Dubai home, which also happens to be the main team sponsor, to New York before starting the second leg of their trip to the event. This is a tough travel schedule for anyone, but Buhumaid and team set aside the jet lag and time difference when they strap into their 2500+ horsepower Pro Extreme machines.

NAS Racing Crew Chief, Al Billes, is certainly no less dedicated than his drivers, and is widely known throughout the industry for his tuning genius. Also on board the NAS Racing Team is Operations Manager, Sameer Sami and Badir Ahli, who pilots the second NAS Racing Pro Extreme car. Their combination is proving to be a dominating force in Pro Extreme and they have no plans to slow the momentum anytime soon. They already have a new Jerry Bickel car and plan to test it soon as a backup car to the current ‘69 Camaro that has wheeled Buhumaid to the points lead.

The NAS Racing Team’s success so far in 2015 is no fluke, as round after round they have consistently posted some of the fastest and quickest times of the field. There’s no doubt that Buhumaid will be one to watch as a major contender throughout the season. Buhumaid has risen as the early Championship favorite and it doesn’t look like he’s ready to relinquish his points lead any time soon.