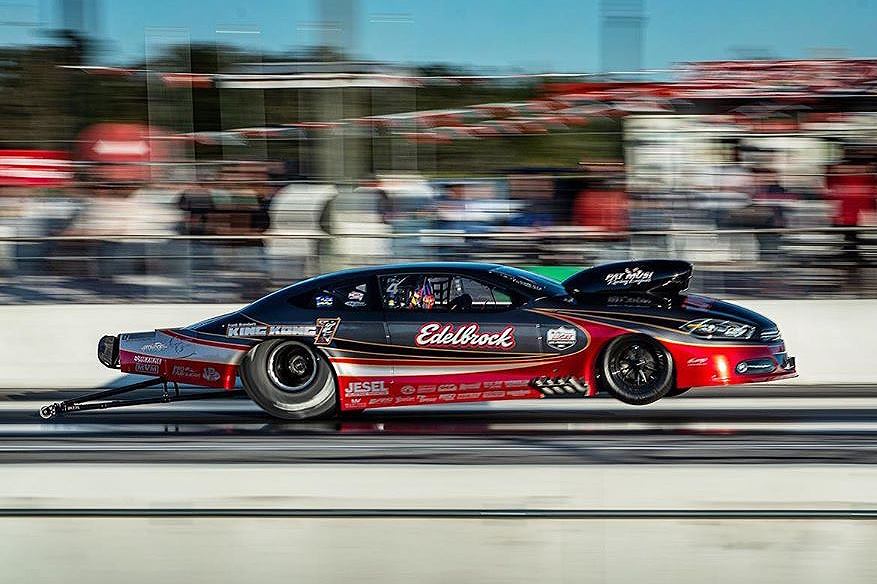 After a productive off-season, Lizzy Musi and the Musi Racing team didn’t waste any time showing the results, winning the first race of the 2020 season at the U.S. Street Nationals in Bradenton.

It was a wire-to-wire performance in the Frank Brandao-owned Edelbrock / Lucas Oil “King Kong 7” 2018 Dodge Dart, as Musi qualified No. 1 in Pro Mod and raced to the event victory in impressive fashion, going 3.651-seconds at 206.67 MPH in the final round to set a strong tone for 2020.

“Lizzy was flawless and the car was flawless, and it was great to see,” Pat Musi said. “It’s always good when you can start the year with a win. We made some good runs and it gives everybody on the team confidence and momentum. Plus, it puts everybody on notice that we’ve been working hard all winter.”

That was apparent from the outset, as Musi ran a blistering 3.625-seconds at 206.67 MPH to qualify in the top spot of a loaded Pro Mod field. She stayed in the 3.60s throughout eliminations, including a 3.668 at 207.62 MPH in a second-round win against Adam Flamholc.

She followed with a 3.681 at 206.76 MPH to advance to the semifinals, where Musi pulled off a perfect .000 reaction time to beat John Camp on a holeshot. In the final round, Musi was again solid on the starting line, tracking down Tommy D’Aprile for the victory on a weekend that was encouraging from every angle.

“We made some good runs and Lizzy has become such a good driver,” Pat Musi said. “That 3.62 at night was hard to beat. She can feel things in the car and she’s focused on the tree, and she just repeats that. It’s everything you could ask for and just shows how solid the team is.” Musi finished the 2019 PDRA Pro Nitrous campaign with a semifinal finish at Virginia, but the team noticed a glitch in the nitrous system at the finale. They found the issue over the winter and that work paid off immediately in Bradenton.

Following the win, the Musi Racing team will continue to work on engine performance heading to the first race of the Street Outlaws: No Prep Kings and PDRA seasons, but Musi likes the potential of what he has seen thus far.

“We’re working on making both engines (for the Dodge Dart) identical,” Musi said. “Those motors were never touched from Virginia and now we’ve freshened everything up. I really feel like we’ll pick up and just add to it. The car is making laps and everybody is pumped right now. Our guys have done a great job. In addition to that, we’ve brought on some great new partners this year such as Brisk Spark Plugs, ACL Bearings, and SRI Performance. It’s going to be a killer year.”

The No Prep Kings season starts on March 20 in Tuscon, AZ, with Musi campaigning the Edelbrock-equipped “Aftershock,” while the 2020 PDRA season kicks off on April 2-4 with the East Coast Nationals at GALOT Motorsports Park.