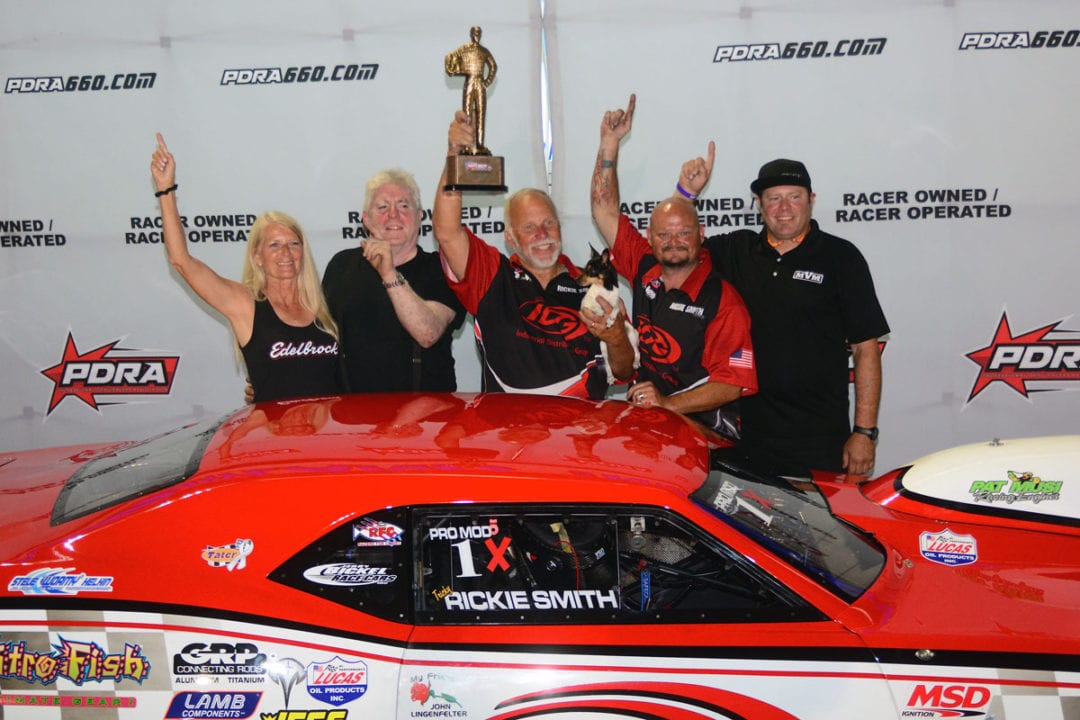 After a dominant 2014 season in which racers using his engines won every PDRA (Professional Drag Racers Association) Pro Nitrous race, set national performance records, and collected the Pro Nitrous championship, Pat Musi is excited about the way things are shaping up entering the final race of the 2015 season.

“Pro Nitrous has been a war this year,” Musi confessed. “The competition really stepped up but when the dust settles at the end of the season, one of our guys will be taking home the championship trophy.”

After their performances at the past two PDRA events, Pro Nitrous front-runners Rickie Smith and Tommy Franklin are perched atop the championship points standings and are the only racers still in contention for the category championship. Smith captured his third win of 2015 at the recently-completed Dragstock XII at Rockingham Dragway, while Franklin scored his second victory of the season at the series’ stop in Memphis in late August. Smith and Franklin both utilize 940-plus cubic inch electronically fuel injected Musi monsters in their Jerry Bickel-built ’69 Camaros.

“You couldn’t ask for two better racers to have on your program than Rickie Smith and Tommy Franklin,” Musi said. “They’re both great racers and have meant so much to the development of our engine program over the last several years. They’re both very deserving champions.”

Smith and Franklin will battle for the championship October 22-24 at the season-ending PDRA World Finals at Virginia Motorsports Park. It would be the first PDRA championship for either driver, but Smith is a nine-time world champion across decades of doorslammer drag racing and is the defending back-to-back NHRA Pro Mod champion. Franklin won his first championship in Extreme Outlaw Pro Mod competition last year.

“We had our ups and downs this year, but we just kept our noses to the grindstone and kept working,” Musi said. “We ignored all the noise and just kept improving our program. In the end, it paid off. And it’s not just Rickie and Tommy; if you take a look at the qualifying sheet or look around at the decals on the hood scoops, you’ll see we have an unbelievable customer base. A big thanks goes out to every single one of our customers.”

In addition to a Musi-powered racer winning the championship, Pat Musi Racing Engines has also secured the engine builder championship in Pro Nitrous. In the season-long competition dubbed “The Nitrous Wars”, Smith’s and Franklin’s victories have given Musi five wins thus far while the next closest engine builder has only two.