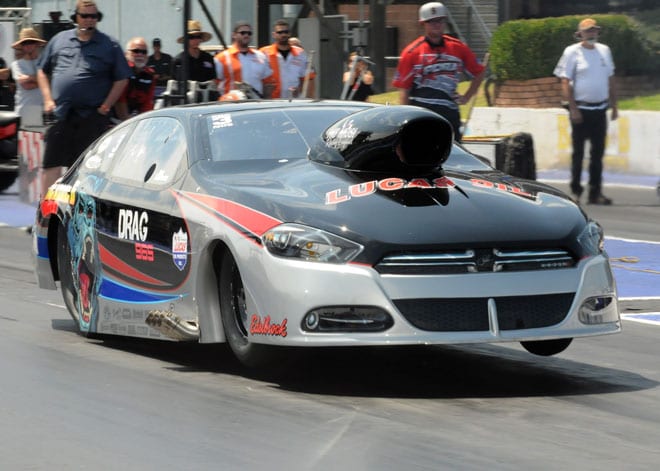 A unique mix of pedigree, performance and personality has made Lizzy Musi a star of the Professional Drag Racers Association series which brings the world’s quickest and fastest Pro Modified race cars back to Rockingham Dragway this week (Sept. 11-12) for Dragstock XII.

The eldest daughter of Pat Musi, a drag racing legend long before he relocated his engine-building business from Carteret, N.J., to Mooresville, Lizzy is to the PDRA what Danica Patrick is to NASCAR with one major exception – she wins. 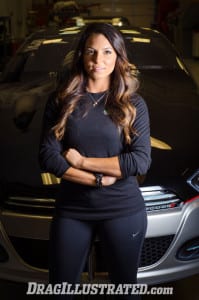 In fact, a year ago she was one of only three drivers to win a race in the Pro Nitrous class while becoming the first woman to break the 200 mile-an-hour barrier.

Unfortunately, her hopes of challenging fellow Carolinians Jason Harris (Pittsboro) and Rickie Smith (King) for a championship this season ended in a March 20 crash at Dallas, Texas that destroyed her 2015 Dodge Dart and left her on the sidelines for the next four events.

She showed no ill effects in her return to the PDRA tour last month at Memphis, Tenn., where she qualified third and posted the quickest race day time of 3.754 seconds at a booming finish line speed of 202.36 mph.

The elder Musi, who as a driver won races in NHRA Pro Stock, IHRA Pro Stock, NMCA and NSCA Pro Street, prefers to talk about Lizzy and her younger sister Patricia who, not unexpectedly, has emerged as a contender this year in the Top Sportsman category.

“I expected her to have success,” he said of Lizzy, “and she’s had it right from the start. I’m so proud of her. She grew up around this stuff and has just soaked it up. She’s a natural. I try to help her all I can; we talk racing all day at the shop and then all night at home. I try to share my experiences with her. She’s going to be a force to be reckoned with for a long time.”

Despite her age, Lizzy is no newcomer to competition. She raced Jr. Dragsters from 1999 through 2007 before moving up to Top Sportsman, a category in which she finished fifth in the ADRL series in 2013. She’s been racing a Pro Nitrous car the last two years.