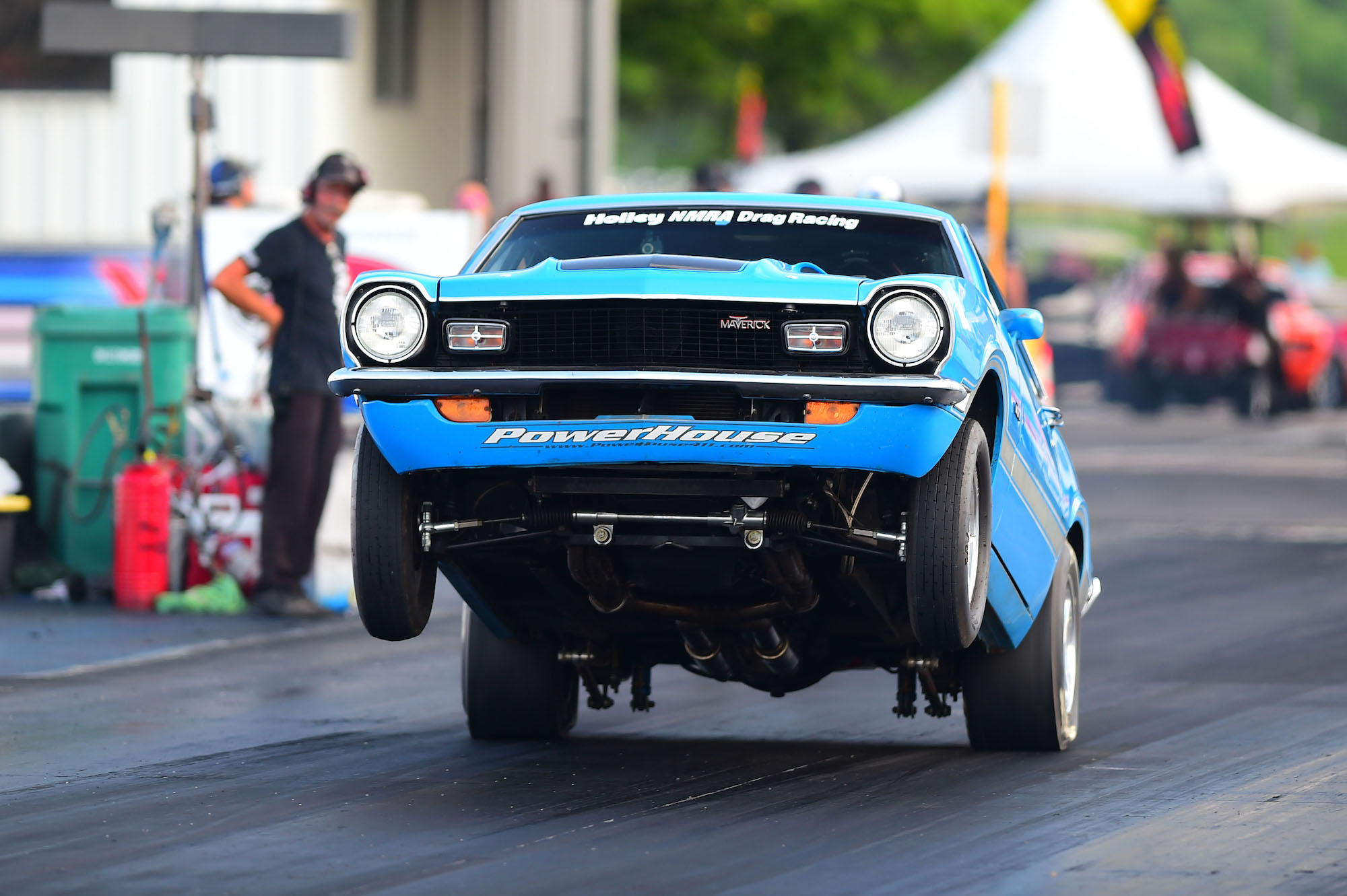 The third event of the 2022 Holley NMRA Ford Nationals drag racing series took place just outside of St. Louis, Missouri, at World Wide Technology Raceway at Gateway over the weekend of May 12-15, 2022, with the 17th Annual NMRA/NMCA Super Bowl of Street-Legal Drag Racing presented by Fuelab. 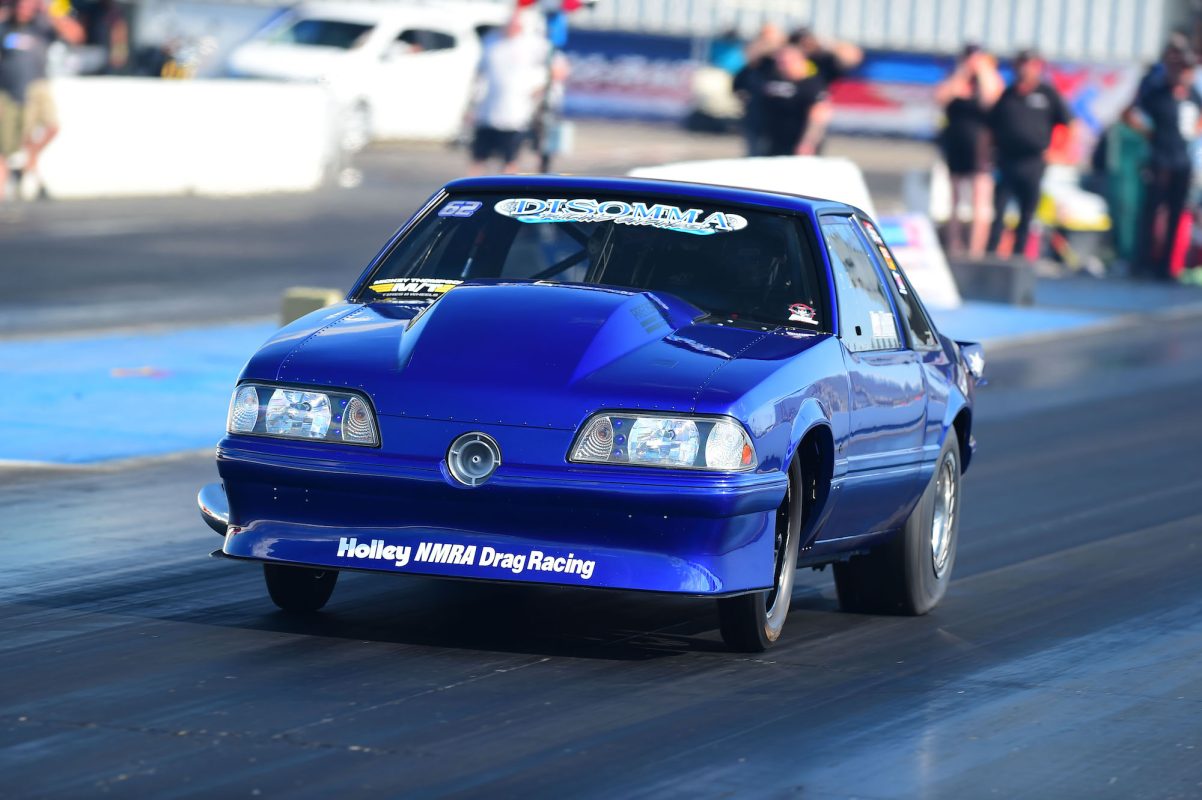 In the Mickey Thompson X275 class, Earl Stanley, who won the Street Outlaw class at the 2021 NMRA season finals, claimed the top spot in qualifying with a 4.340. Stanley bowed out early, though, and it was Eric Moore and Frank Mewshaw who cleared eliminations to make it went to the final round. Moore claimed the slightest of margins at the start, and narrowly held on for the win, 4.328 to 4.329.

As with all combined events, the NMRA’s VP Racing Madditives Renegade class joined forces with the NMCA Edelbrock Xtreme Street class, and reigning NMRA champion Joel Greathouse set the pace for the 18-car field with a 4.603 at 154.74. Greathouse got through first round and then enjoyed a competition bye in the second round. He was gifted a broke bye in the second after Nick McGrath couldn’t make the lane call. He posted a stout 4.585 on that run to set him up for the semifinal round during which Greathouse snagged a holeshot win over Clements, 4.59 to 4.58. In the final, it was Greathouse pitted against Keith Ciborowski, with Greathouse streaking away to his third straight win after Ciborowski spun after the hit. 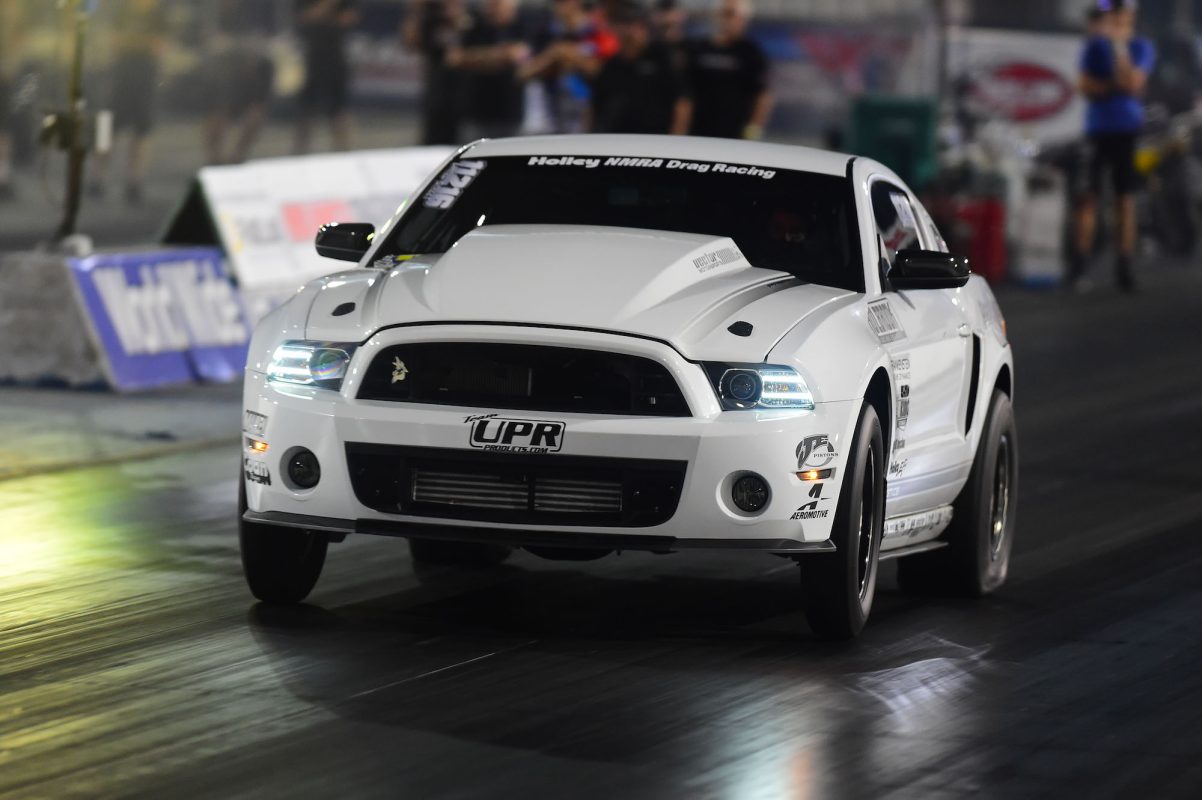 Samantha Moore continued her dominant streak in JDM Engineering Limited Street as she claimed the number-one qualifier spot early in the weekend. From there, the Brighton, Michigan, resident defeated Larry Starost and sped past Stacey Roby in the final round to take another trip to the NMRA Winner’s Circle.

In G-Force Racing Transmissions Coyote Stock, Charlie Booze Jr. was the only car to dip down into the 9.7s during qualifying as his 9.78 was good for the top spot in qualifying. Booze worked his way to the final round of the gear-banging contest to meet Shane Stymiest. Both drivers cut identical .077-second reaction times, but Booze Jr. was able to edge out Stymiest for the win and the Super Bowl ring, 9.90 to 9.92. 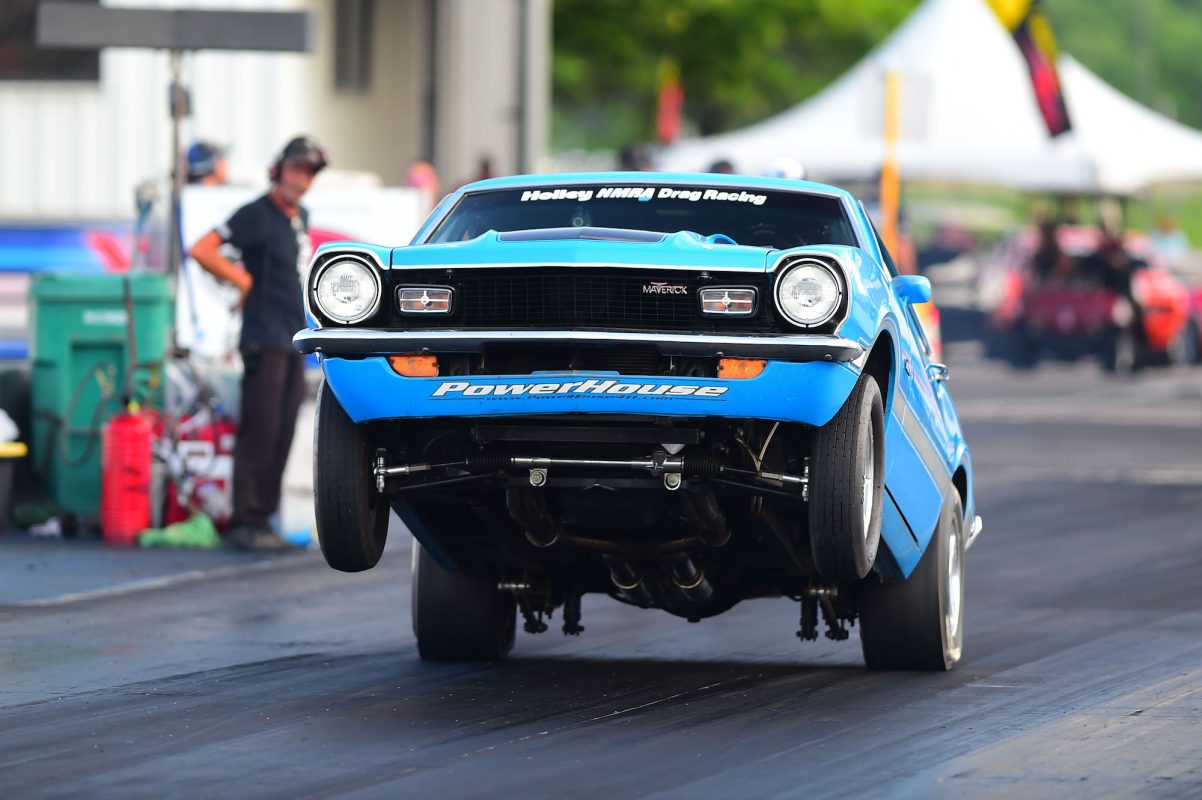 Mark Anderson was the quickest qualifier in Richmond Gear Factory Stock at this event last year, but Mike Bowen edged him out for those honors in 2022 with a 10.20 to Anderson’s 10.24. Bowen drove his Maverick to the final round of competition, and then proceeded to defeat Chris Niebauer, 10.17 to 10.29.

ARP Open Comp’s drivers were all gunning for the top spot in qualifying, and Jon Pickering earned the honors with a dead flat .000 reaction time in his 1974 Maverick. Pickering piloted his Maverick to the final round where a -.014 red light by Charlie Atkinson turned the win light on in his lane.

Matthew Brown cut a near-perfect .001 light to take the top spot in Exedy Racing Clutch Modular Muscle qualifying. In the fifth round of competition, Shane Williams was slower on the tree, but tight enough on his dial in to take the victory over Andy Russell in the final round.

Rodney Ward edged out Dale Aldridge with a .003 reaction time to his .004 for the number-one qualifier spot in HP Tuners Super Stang. Ward would drive the wheels off his Mustang all the way to the finals, where he defeated multi-time NMRA champion Marvin Knack for the event win. 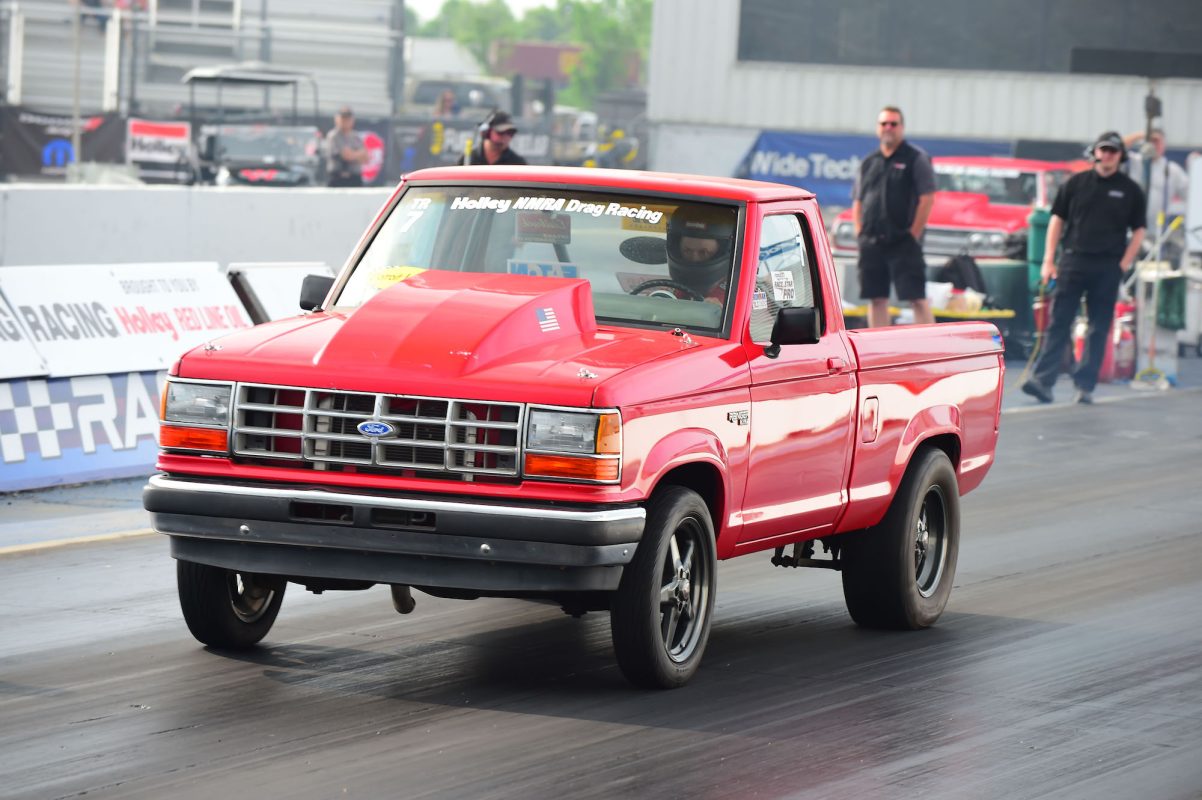 Defending Detroit Locker Truck & Lightning champion Mike Roup set his name at the top of the qualifying field with a .009-second light, and he would find his way to the final round of competition to square off against, Gregory Collins. When the lights came down, Collins was .001 on the tree to Roup’s .261, and went 11.63 on an 11.685 to Roup’s 11.32 on an 11.380 effort to take the event win.

Normally competing in the NMCA’s Dart NA 10.5 category with his Fox-body Mustang, Chad Neuenschwander got behind the wheel of his 2018 Mustang and topped the qualifying sheets in the NMRA’s SCT Ford Muscle class. Four rounds of eliminations later, Jason Phillips squared off against David Mormann. Phillips went .002 off the tree, which allowed his 14.883 on a 14.75 index to defeat Mormann’s 10.851 on his 10.75.

The 2022 Holley NMRA Ford Nationals drag racing series continues at the NMRA Ford Performance Nationals at Summit Motorsports Park in Norwalk, Ohio, on June 9-12 and both the NMRA and the NMCA will return to World Wide Technology Raceway in 2023 for another epic installment of the NMRA/NMCA Super Bowl of Street-Legal Drag Racing. For more information and advance tickets, visit NMRAdigital.com.