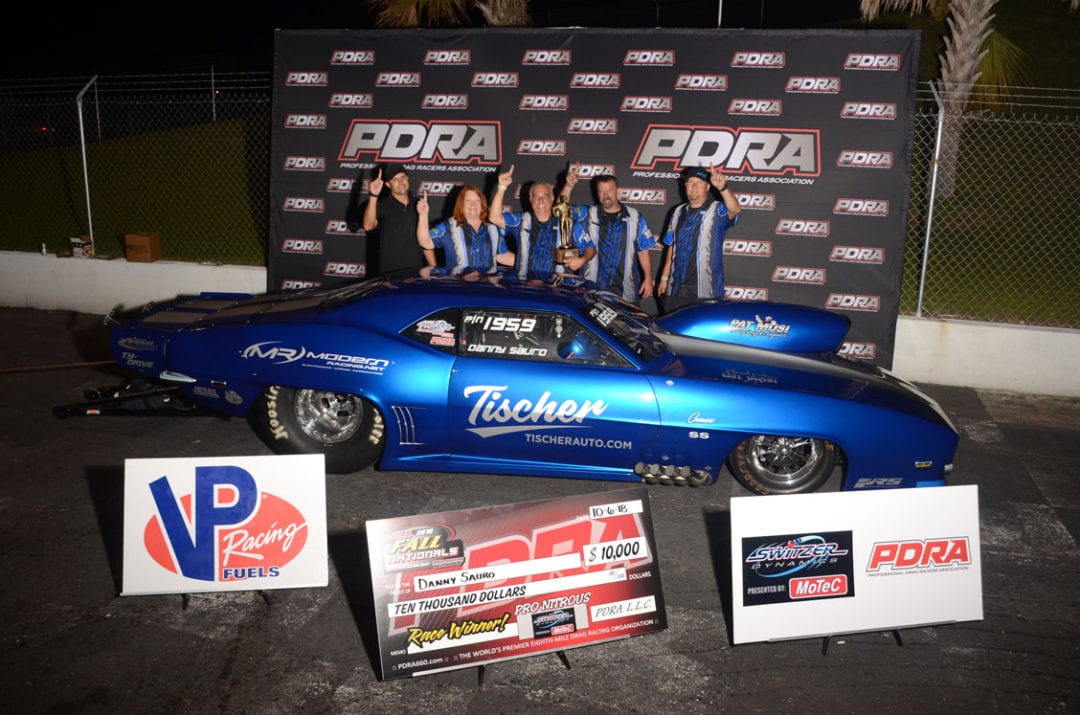 Sauro qualified the Tischer Auto Group ’69 Camaro in the #2 position with a 3.686 at 203.71 MPH, both career bests at the time and the best qualifying effort of his career, then marched through eliminations before defeating defending Pro Nitrous world champion Tommy Franklin in the final round while resetting the national elapsed time record at 3.652 seconds.

The entire Sauro Racing operation is housed, maintained, prepared, and tuned by Modern Racing in Mooresville, NC, with Elkes serving as crew chief at the track. The team has made incredible strides over the course of the past two seasons. Sauro only acquired his Pro Modified license in 2017, when he moved up from the Super Gas ranks.

“This is something I’ve wanted to do since I was a kid, and I’m blessed to be here,” said an ecstatic Sauro, who hails from Mount Airy, Maryland. “I was fortunate to meet Justin Elkes and get on board with Modern Racing. They do it all and keep this rocket ship going. I wouldn’t be here without them. I can’t thank my crew and my family enough for all their support.”

Elkes, who honed his skills over the course of two decades working with top Pro Stock and Pro Modified teams, had a gameplan going into the weekend and stuck with it.

“I told Danny we were going to be fast this weekend, but for me, it’s important to make consistent runs and slowly chip away at the combination,” Elkes said. “We’ve been refining every detail of the car this season, from engine management to suspension to wiring and electronics. We knew we had the parts and pieces to compete at a high level and challenge for the record, and we were able to put it all together this weekend.”

With Sauro’s success as the flagship of the Modern Racing stable, Elkes is also committed to adding a second nitrous-assisted Pro Modified team to the mix for 2019.

“We’re capable of replicating this process with a second team, and we’re currently fielding inquiries for next season,” Elkes stated. “Managing a team’s complete operation allows us to provide them their best shot at success. We’re able to refine the car constantly, and ensure everything is up to our standards for each and every race. Adding a second operation will provide twice the data and opportunities to win races and set records.”

Look for the Modern Racing support trailer on the manufacturer’s midway at the PDRA World Finals at Virginia Motorsports Park on October 18-21. Also, check out Modern Racing at www.modernracing.net and on Facebook, Instagram, and Twitter, stop by the facility at 176-E Knob Hill Road in Mooresville, or call (704) 576-7337 for more information.