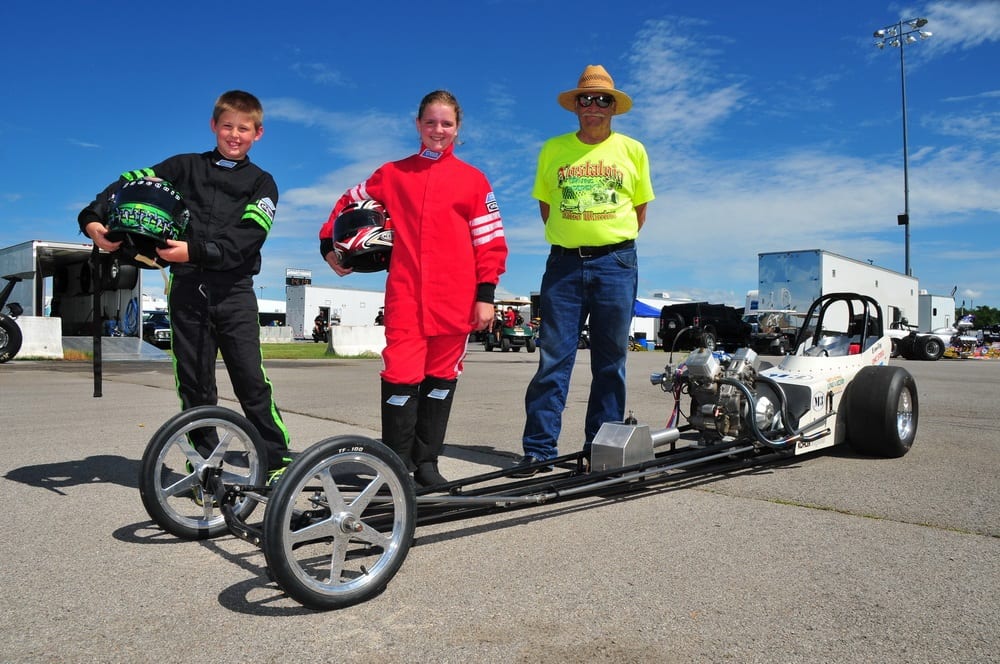 Although Robert Manuel has been building race cars his whole life, his latest creation could very well be his most unique to date—and hands down the most fun per square inch!

It’s so unique; in fact, there’s not even a class in which to compete the car, so Manuel better known as “Nitro Bob,” is satisfied to just tour the car to various Midwestern tracks, where he allows experienced Junior Dragster drivers to make exhibition passes in his unusual creation. On other occasions he introduces brand new recruits—complete novices to the sport—into the cockpit of this mini front-engine race car, acquainting youngsters to the joys of drag racing.

The car itself is something of a marvel and Bob insists it’s the only one like it in the world. At a glance it looks similar to a Junior Dragster, only slightly larger, and of course there’s the old-school slingshot design. “I grew up with front-motored dragsters and that’s why I decided to build this one,” says Bob, who hails from Bethany, Oklahoma.

“The tolerances of this car are true and correct from front to rear, top to bottom, within half-a-thickness of a dime,” Bob declares about the 132-inch wheelbase chassis constructed of chrome moly tubing that he TIG welded on a jig. For power, the peculiar little race car relies on a 730-cc Kohler motor, an engine that has proven very reliable in industrial applications such as chipper/shredders and high end lawn mowers. Bob is completely satisfied with how it propels his exhibition dragster as well. The car is actually geared to run approximately 112 mph in the eighth mile, although Bob detunes it drastically and instructs his young pupils to make only 330-foot passes in the car.

The tiny dragster even runs on nitro methane!

“I let the kids get in the car and ‘cackle it’ while sitting in the pits; it’s on as much as 75-percent nitro when we do that,” he explains, though it burns a lot less nitro during an actual run. “It’s mainly for my benefit anyway,” laughs Bob, who turns 74 on his next birthday. “I just like to smell it.”

Most recently, Bob towed the dragster to Tulsa Raceway during an NHRA Lucas Oil event, where he collaborated with his two latest driving recruits. Emily Robertson, 11, is an Oklahoma City native and a two-year veteran of the Junior Dragster ranks. She often competes at tracks in Oklahoma as well as Texas, though she had never driven anything quite like Manuel’s mini slingshot. “People think Nitro Bob’s car is so cool!” Emily beamed as she prepared for the evening’s exhibition runs.

Also taking a turn in the driver’s seat was nine-year-old Gage Martin of Mustang, Oklahoma, who also is a two-year veteran of the Junior Dragsters and son of PDRA Pro Extreme driver Todd Martin, who co-owns the Tulsa track with Pro Nitrous driver Keith Haney.

As for Nitro Bob, he’s admittedly found the Fountain of Youth through the eyes of drag racing’s next generation. “These kids who drive my car are what’s keeping me young!” he declared.