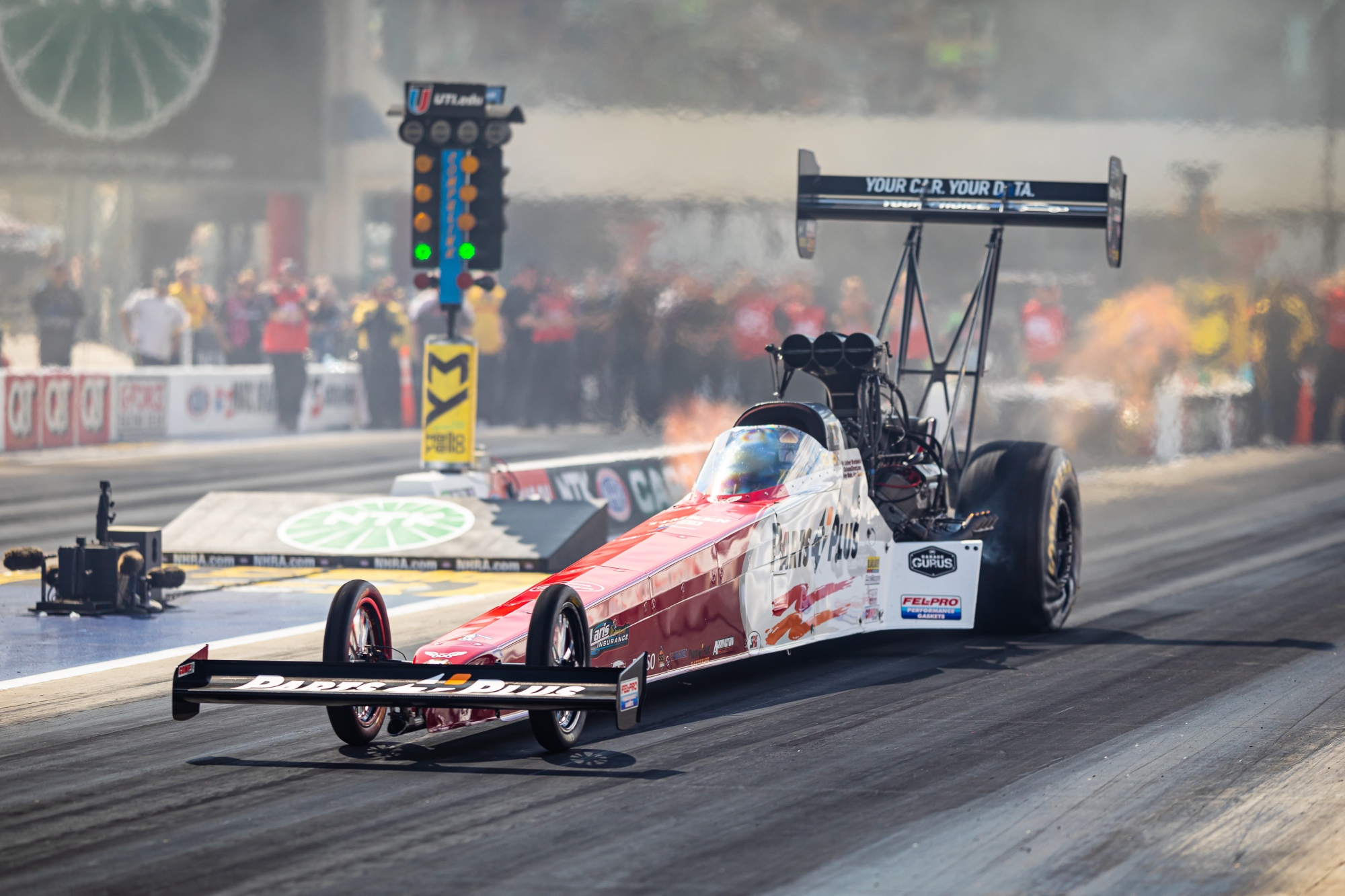 Clay Millican has been racing a Top Fuel dragster for just about as long as he can remember. While the majority of his success came in the early 2000s on the IHRA circuit, including six world championships and 51 national event wins, he’s been a tough competitor on the NHRA tour for the past couple of decades, too. 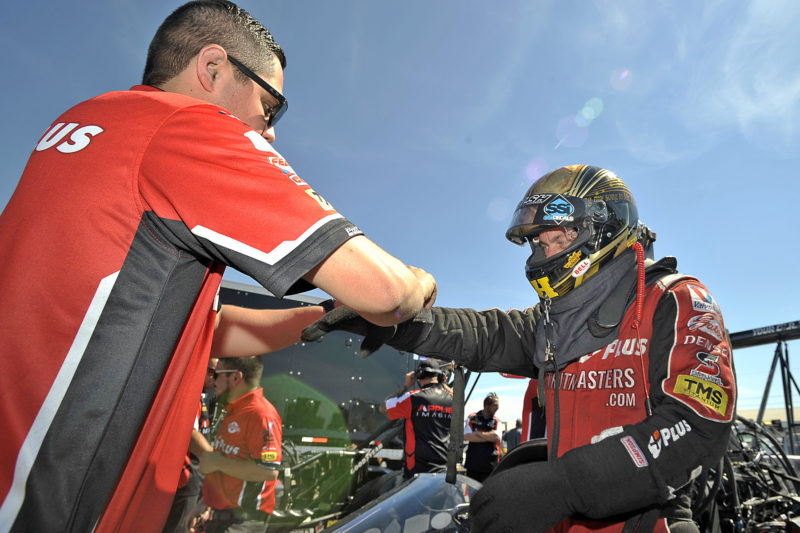 But even as a tough competitor, it took Millican 19 years and 254 races before he took home the NHRA Top Fuel Wally. Many drivers would have given up before they found themselves in the Winner’s Circle, but Millican was persistent and knew his win would come. And come it did, at the 2017 Thunder Valley Nationals in Bristol. And while it might have been long overdue, the win seemed to come at the perfect time.

“Nothing will ever beat Bristol. I can win the championship, I can win Indy, but I can promise you that it will not top Bristol,” says Millican.

For those who may not know Millican’s heart-wrenching story, he lost his 22-year-old son, Dalton, in 2015 in a single-person motorcycle crash near his hometown in Tennessee. And Clay’s first win happened to fall on June 18, 2017: Father’s Day.

“For 19 years of trying to win an NHRA event, I had all of these plans. I’m going to get out of the car and do this, say this… but because it happened on Father’s Day, and the way it happened, it was just raw emotion. I knew that it was meant to be,” Millican says, still emotional talking about the win.

Ask any race car driver what their top moments in NHRA history are, and even those who aren’t hardcore Millican fans will say that seeing him get that win in Bristol is near the top of their list. Even those who aren’t fans of NHRA drag racing were moved by Millican’s reaction after his win.

Millican followed up that win with two more in 2018 at Chicago and Topeka, and now he’s looking for his fourth NHRA Wally. But more than just that, he’s looking for the long-awaited championship.

Millican gained his first NHRA wins with legendary tuner David Grubnic calling the shots for his Parts Plus-backed Top Fuel dragster. But just ahead of the last race of the 2018 season, Grubnic announced his departure from Millican’s team and plans that he would be tuning the Advanced Auto Parts dragster of Brittany Force in 2019.

As the rumor mill churned, as it often does near the end of racing season, Millican announced in November [2018] that Straightline Strategy Group would be taking ownership of the Stringer Performance Top Fuel team, and Mike Kloeber would be the new crew chief for Millican in 2019. And he wasn’t a stranger to working with Millican. Kloeber is the man who led Millican to those 51 IHRA Top Fuel wins.

So now Millican was facing a new season with a new crew chief and a different crew, but he had no doubts about his new team and the success they could have.

“It was stressful. It was a lot of work,” Millican says. “But I had no doubt that Mike Kloeber could do this. We did so many amazing things in my IHRA time. A lot of people thought we were nuts. But the guy is a winner.”

Millican struggled the first couple of races this year with first-round losses in Pomona and Arizona, but the team finally found some traction when they got to the finals in Gainesville.

“Attitude is everything. We know we can do this, we can win races, and we’ve got a shot at this championship,” said Millican at the U.S. Nationals in September, where he left going into the Countdown in the No. 4 spot.

And although he takes the big stage at the NHRA national events, Millican says he’s a sportsman racer at heart.

“I 100% love bracket racing and the sportsman classes,” he says. “I eat, sleep, and breathe it. I’m constantly checking my phone to see results, and I try to make it to as many races as I can.” 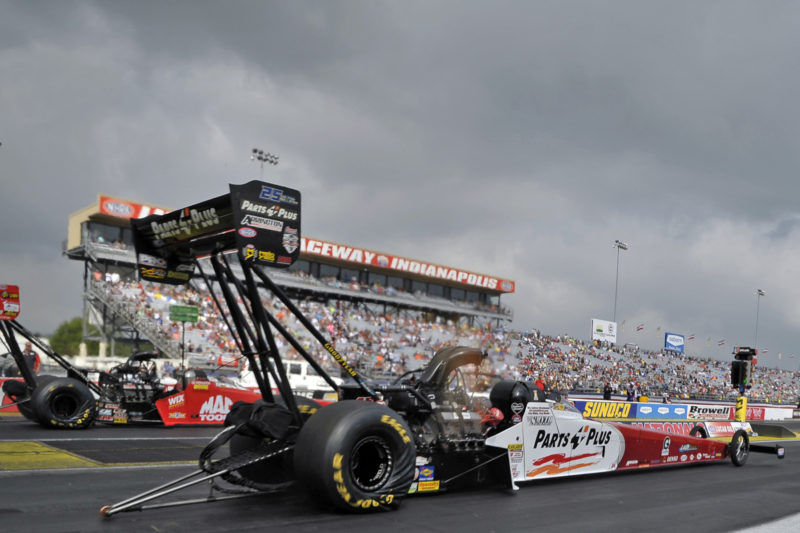 And even though he wasn’t behind the wheel, Millican was at the Great American Bracket Race in September at his home track in Memphis, Tennessee. But will we ever see him behind the wheel at a big-money bracket race? He says to never say never, but he doesn’t think he has a shot anymore when it comes to bracket racing.

“It has become so competitive that I don’t think someone like me, who hasn’t done it in a long time, would even have a chance,” he admits. “You used to be .020 on the tree and one above and you were doing good. Now that won’t even get you past the first round.”

And Millican’s support of bracket and sportsman racers doesn’t just end there.

At the NHRA national event in Brainerd, Minnesota, earlier this summer, Millican had a friend, Top Dragster driver Ross Laris, who reached out to him and asked for some help after he threw a drive shaft out of his car.

“Ross told me it was a really bad deal, so I got a few guys over there for about five hours welding stuff and getting his car put back together so he could get qualified,” Millican says. “One of my guys, Chris Menapace, who did the welding on the car, saw Danny Nelson [builder of Laris’ Racecraft Chassis dragster] later and told him ‘anything you find on that car, I apologize. I had to hack it together!’”