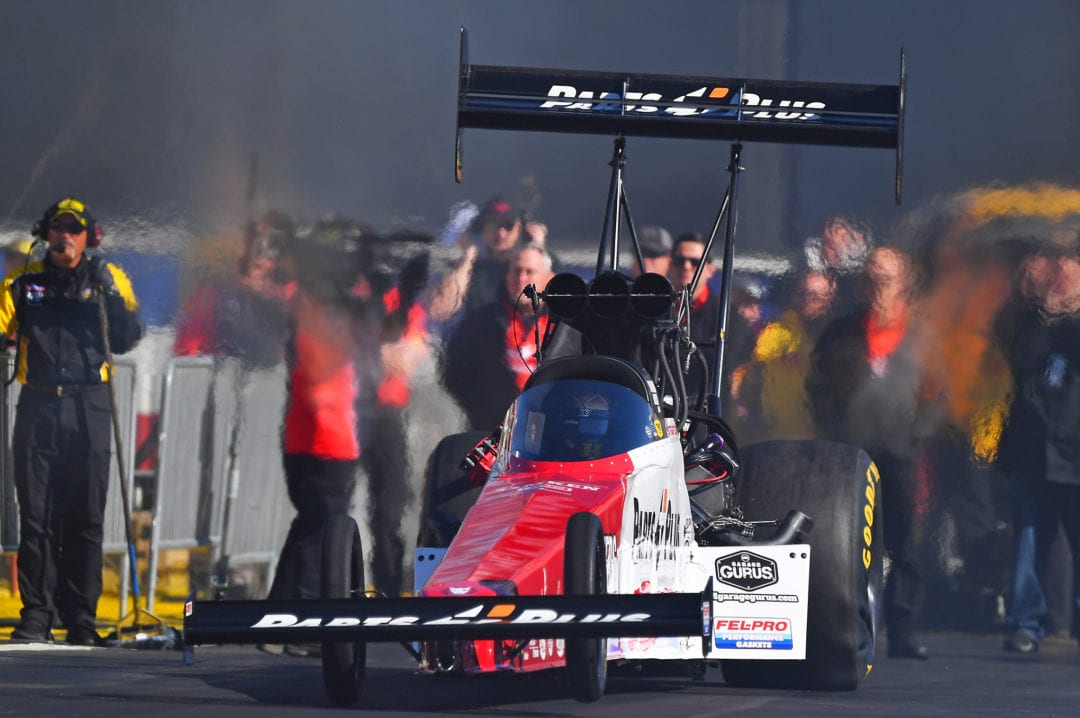 Clay Millican and Matt Hartford began the 2019 season with strong qualifying efforts and despite multiple obstacles throughout the weekend, the Straightline Strategy Group (SSG) teams prevailed with great ETs and close races.

Clay Millican, driver of the Parts Plus/Strutmasters.com Top Fuel dragster, qualified 10th with a 3.759. The Mike Kloeber-tuned team lined up against Mike Salinas Sunday morning for the last pair of Top Fuel in the first round. As they were about to spin the motors over on the starting line, rain began to sprinkle and it postponed the rest of eliminations to Monday.

On Monday, Millican left the starting line first, but shook the tires. With a perfect quick pedal job, he could not catch up to Salinas’s 3.68. Although it was early exit, the team accomplished many goals with a fresh, new crew. With Kloeber, Jim Oberhofer, and Jack Wyatt at the leadership, the team rolls into to Phoenix with the first race of the year under their belts.

“I am so proud of the people working on our team,” Millican said. “Considering all the work that we had to do during the off-season it is very impressive. I am very excited to be reunited with Kloeber again and how could you not be happy to work with Oberhoffer and Wyatt.”

Matt Hartford, driver of the Total Seal Piston Rings Pro Stock car, matched his Top Fuel teammate with a 10th qualifiying position and a time of 6.560 ET. During Monday eliminations, Hartford was first off the line against Kenny Delco en route to the win before falling to Erica Enders a round later.

With the formation of the SSG alliance, the teams are off to a great start for the 2019 NHRA season. Both teams are preparing for the second race of the year, the Magic Dry Organic Absorbent NHRA Arizona Nationals, in two weeks.