On the day when Jeg Coughlin Jr. collected his 500th round win in Pro Stock, he more importantly won the NHRA Kansas Nationals Sunday at Heartland Park Topeka, his first win of the season and first in the JEGS/Mopar Dodge Avenger.

“We’ve been knocking on the door all year,” said Coughlin, who last won at the Brainerd event in 2010. “We’ve had our ups and downs and never quite been able to seal the deal and get a race win. We came out of a test in Tulsa earlier this week really happy with what we had and were extremely aggressive all four runs.”

Coughlin’s final-round race against teammate Allen Johnson was a Pro Stock battle for the history books. Both drivers had .013 second reaction times and raced door-to-door down to the quarter mile. 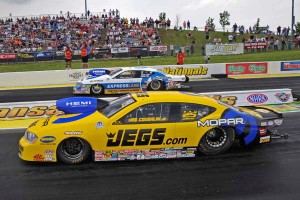 “A.J.’s had my number this year,” Coughlin said. “We’ve met three times already and he’s got the best of us. So it felt great to get that win in the final round. That final round ranks up there with some of the best races I’ve ever won.”

“As many times as he and I have gone head-to-head in 2013, we’ve been so evenly matched,” Coughlin said. “I knew if I could be .015 on the tree or better, I’d be ok. It was a drag race exactly how you’d script it. We were welded together from start to finish. Fortunately the yellow and black car got the nod today.

“I could hear him over there, but we were able to stay out front.”

On the way to his 53rd career Pro Stock victory and second place in the class standings, Coughlin knocked off Greg Stanfield, Rickie Jones and Vincent Nobile.

“It almost brought a tear my eye to see the win light come on for our 500th round win,” Coughlin said. “Then any day you are hoisting a Wally at the end – it’s what you yearn for. Today was extra special for a lot of reasons. To win a Wally at the end of the day has been exactly what the doctor ordered.”

Coughlin opened the day against Stanfield and set the tone for what was going to be a long day for the rest of the class. In the first round, Coughlin got a sizable jump off the starting line and never looked back.

It was more of the same in the second round, when Coughlin out-paced Jones to hit the 500 career round win milestone. Jones left first, but Coughlin’s Dodge had too much under the hood. Coughlin finished in 6.680 seconds at 206.39 mph while Jones crossed in 6.719 seconds at 205.88 mph.

The JEGS/Mopar Avenger got quicker in the semis, and needed every faction of a second to get around fellow Dodge driver Nobile. Nobile cut a .003 second light to Coughlin’s .013 reaction time, but Coughlin erased the deficit by the 60-foot mark and pulled away to a pass of 6.665 seconds at 207.18 mph. Nobile finished with a 6.686 at 206.42 mph.

“I’ve been blessed to have a great career,” Coughlin said. “My family has been behind me 100 percent. They are as much a part of this win as anyone.”

Up next for Coughlin and the JEGS.com Avenger team is the May 30-June 2 Toyota Summernationals from Old Bridge Township Raceway Park in Englishtown, N.J.