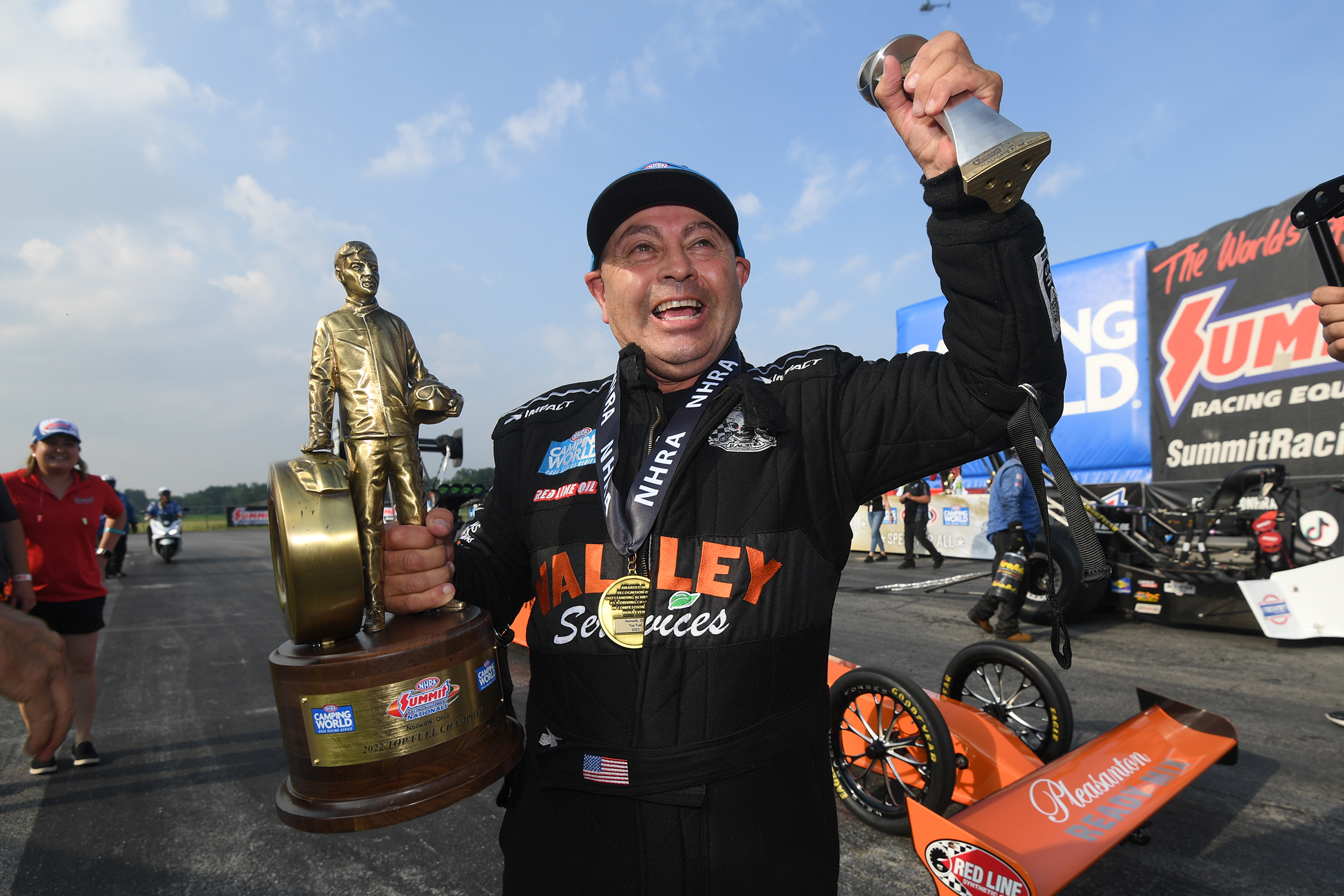 The NHRA Top Fuel dragster driven by Mike Salinas landed once again in the winners circle Sunday at the Summit Racing Equipment NHRA Nationals. This marks the fourth win of the season for Salinas and the Scrappers Racing Top Fuel team, more than doubling the total number of wins the team had at the start of 2022. Salinas now sits at the top of the NHRA Camping World Drag Racing Series Top Fuel points standings with only six races remaining in regular season competition.

Salinas was qualified third going into competition on Sunday. He and his Valley Services/Scrappers Racing Top Fuel dragster would have a tough lineup ahead but that did not deter the experienced driver and team owner.

“We have a lot of racing left this season,” said Salinas. “What we’ve been doing is just approaching it as another round, no big deal. Stay calm. Relax. Be humble. Have fun. I race myself. I don’t even care who we run, to be honest. If it’s my day and we do our job, we will prevail at the end. We earned the right to be out here. I’ve been working at this for a lot of years. We have a great team, a great crew and I’m learning how to drive again.”

Salinas faced one of the most decorated Top Fuel drivers of all time, eight-time world champion Tony Schumacher, in the first round of eliminations. While Schumacher made his best pass of the weekend, 3.794-seconds at 294.82 MPH, it was no match for Salinas’s 3.758 at 328.06.

Doug Kalitta was the next driver to face Salinas, who has more round wins against Kalitta than any other driver. Salinas had the starting line advantage and stayed ahead of Kalitta all the way down the track, defeating him with a pass of 3.771 at 329.26. 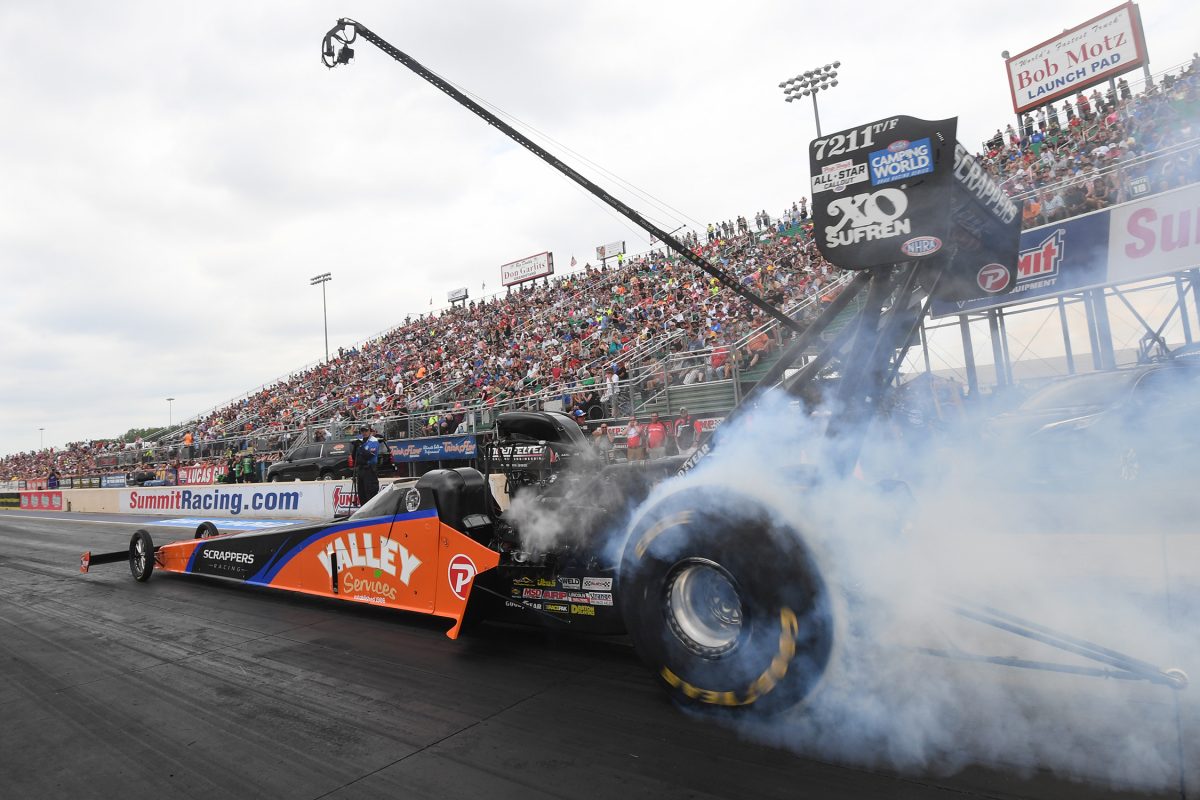 In the semifinals, Salinas lined up against Leah Pruett and once again took the starting line advantage all the way to the finish line despite dropping cylinders at the top end. Pruett went up in smoke at the launch and Salinas advanced to the finals against Josh Hart.

While Hart is known for having some of the best reaction times in the category, Salinas managed to get the startling line advantage in the final round at Summit Racing Equipment Motorsports Park, affectionately known as “America’s Race Track.” His pass of 3.706 defeated Hart’s 3.783 to give the driver his seventh NHRA Camping World Drag Racing Series Top Fuel career victory. Salinas set the track speed record on his path to victory with that final pass, reaching 333.58 MPH at the 1,000-foot mark.

Salinas was quick to share his appreciation for the crew and sponsors behind him as he exited his car and received the special ice cream scoop trophy, a unique piece of hardware presented only to Summit Racing Equipment NHRA Nationals winners.

“Rob Flynn (Crew Chief) brought a calm to the team. What I love about the team is that everyone has a voice. He will have a sit down with all of them and listen to them, (discussing) what we learned, what we saw, what we can do to improve. That makes this team a real team, where they have a say so. I think that is unprecedented and it makes everyone on the team feel like they are the crew chief. So that’s pretty awesome.”

The Scrappers Racing Pro Stock Motorcycle duo of Jianna Evaristo and Jimmy Underdahl picked up valuable momentum this weekend despite going out early in eliminations. Evaristo is getting more comfortable on the seat of her Scrappers Racing Suzuki after an incident during testing had her sidelined for the first few races of the season. She made a season-best pass of 6.798 at 199.05 during qualifying. Underdahl continues to put down some of the best reaction times in the category including a .003 leave on first round competitor Joey Gladstone.

In NHRA Lucas Oil Drag Racing competition, Jasmine Salinas is riding high on a wave of momentum thanks to an outstanding qualifying pass on Saturday. She powered her Scrappers Racing Top Alcohol Dragster to the No. 1 qualifier position for the second time in her NHRA Lucas Oil Drag Racing Series career with a pass of 5.272 at 277.09. She defeated Kelly Kundratic in the first round of eliminations, earning lane choice in the process. The talented driver then fell short against her second-round opponent, Jeff Chatterson.

The next competition for the Scrappers Racing team will be the Dodge Power Brokers NHRA Mile-High Nationals, July 15-17 in Denver.