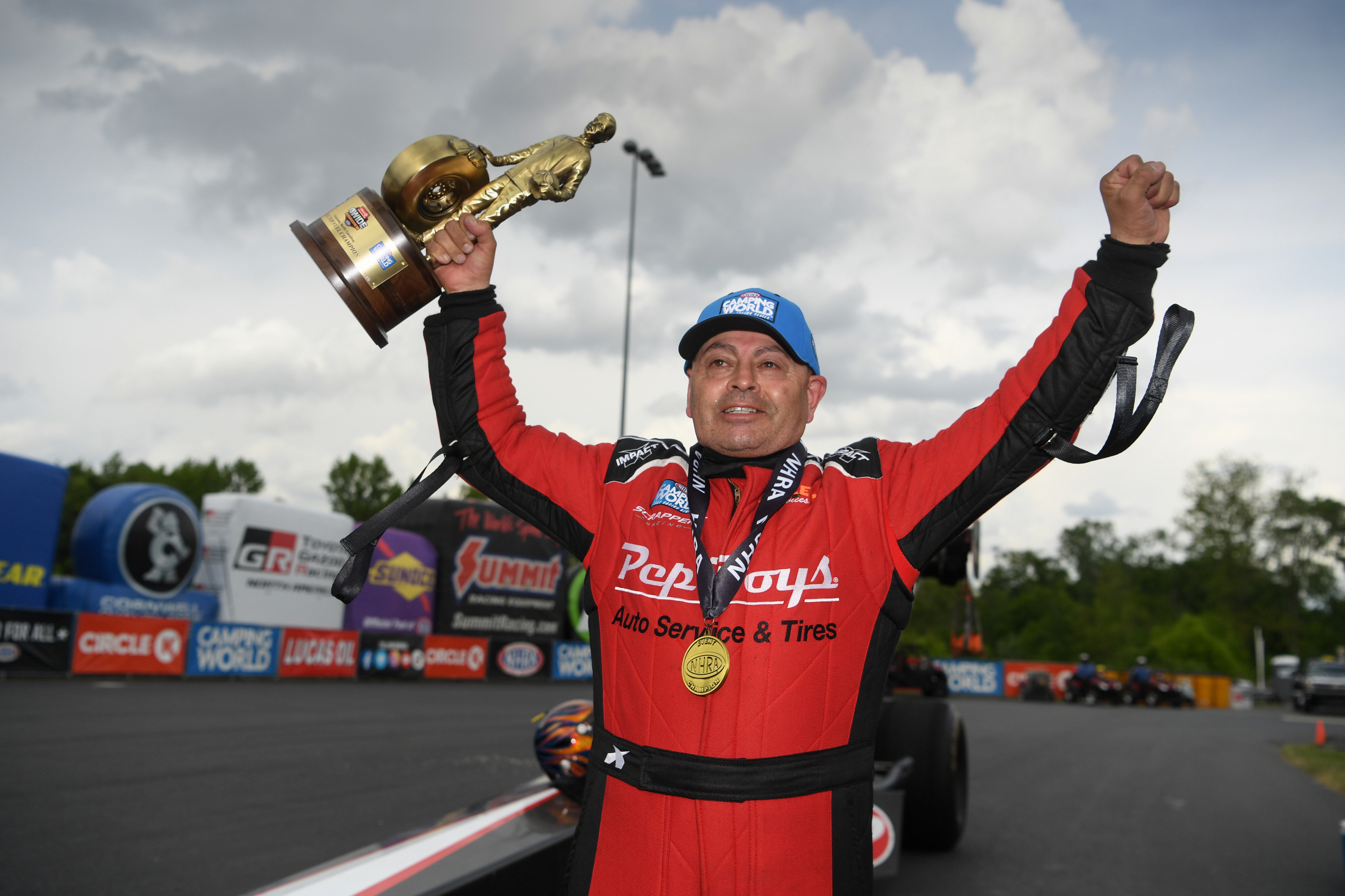 It was a banner day for the entire Scrappers Racing team at the Circle K NHRA Four-Wide Nationals at zMAX Dragway. Top Fuel driver and team owner Mike Salinas powered his Pep Boys/Scrappers Racing Top Fuel dragster into the winners circle, earning his second event win of the season. This marks the first win with the team’s new sponsor, Pep Boys, one of the nation’s leading automotive service networks.

In her Scrapper Racing Top Alcohol Dragster, Jasmine Salinas earned an impressive runner-up finish. And in Pro Stock Motorcycle, Jimmy Underdahl broke the 200 mph barrier for the first time in his career on his Scrappers Racing machine.

Entering the day’s competition from the No. 5 position, M. Salinas knew he had a challenging line-up ahead of him in the fan-favorite Four-Wide racing format. In the first round of NHRA Camping World Drag Racing Series Top Fuel action, he faced Doug Kalitta, Alex Laughlin and Doug Foley. Foley had the starting line advantage but blew an engine at half-track making room for Kalitta and M. Salinas to advance to the second round.

Consistency was key as the talented Top Fuel pilot rocketed his 11,000-horsepower beast to defeat Kalitta and Justin Ashley in round two with a blistering run of 3.708 seconds at 331.77 mph. Cameron Ferre came in second in the quad and advanced to the finals with M. Salinas where they faced Josh Hart and Spencer Massey. M. Salinas rocketed to the finish line first to score his fifth career Top Fuel win with a pass of 3.708 at 330.47.

“You’ve got to believe that you belong here,” M. Salinas reflected after his win. “We’ve worked so hard to get here. Most people don’t understand. This stuff is hard. We’re racing with the best people in the world, but, if you believe you belong here and you do the right things to stay here, you’re going to win. We are hitting a stride right now. I’ve worked for this for 17, 18, 20 years – losing, losing, losing. You know how you’ve got to pick yourself up every day from losing, to win? That’s us. That’s why we named this team Scrappers, because we don’t quit. We just keep going.”

In NHRA Camping World Drag Racing Series Pro Stock Motorcycle competition, Jimmy Underdahl entered raceday from the No. 6 position thanks to a solid pass of 6.793 at 199.55. In the final round of qualifying, Underdahl broke the 200 mph barrier for the first time in his career, running a 6.827 at 200.08. In eliminations, the skilled rider powered through the first round on his Scrappers Racing Suzuki, advancing along with Karen Stoffer as they defeated Ryan Oehler and Chris Bostick. In the semifinals, Underdahl once again went over 200 mph, but his pass of 6.861 at 200.44 wasn’t quite enough to advance to the finals. 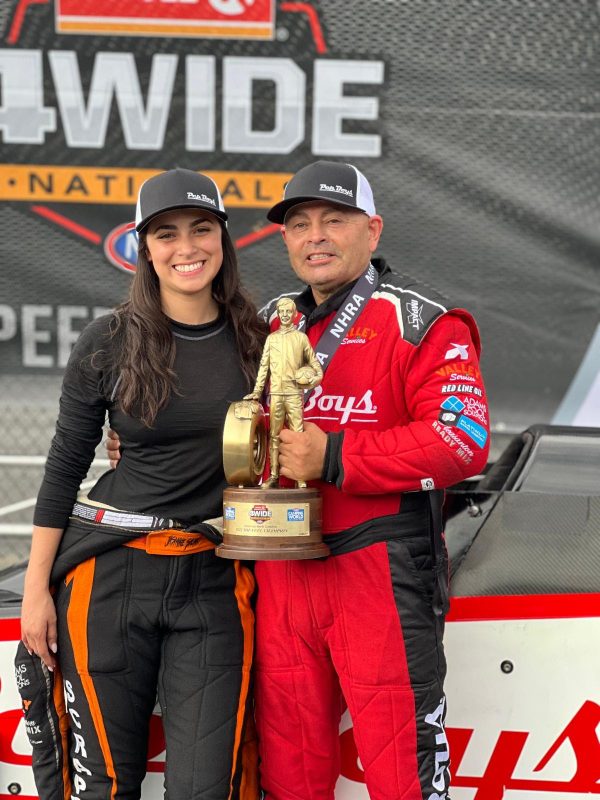 For J. Salinas in the NHRA Lucas Oil Drag Racing Series, she entered eliminations from the No. 6 spot facing off against Megan Smith and Julie Nataas in the first round. In a semifinal quad of Smith, Dan Mercier and Mick Steele, her Scrappers Racing Top Alcohol Dragster’s outstanding pass of  5.312 at 275.84 advanced her to the final round where she would face Smith for the third time today, as well as Corey Michalek and Taylor Vetter. Although she had the quickest pass of the quad with a 5.320 at 275.39, Michalek had the starting line advantage and walked away with the win.

“I really wanted to double-up with my dad this weekend,” said J. Salinas. “But I’m super proud of our team and congratulations to the Top Fuel team for the win. Winning is already challenging as it is, but winning a four-wide can be even harder. I’m proud of our team for getting runner-up and pushing through all the challenges we had early on in the weekend. I know a double-up, or even a triple-up, for our family is coming soon!”

The next stop on the NHRA Camping World Drag Racing tour is in Richmond, Va. where racers will compete in the Virginia NHRA Nationals on May 13-15 at Virginia Motorsports Park.