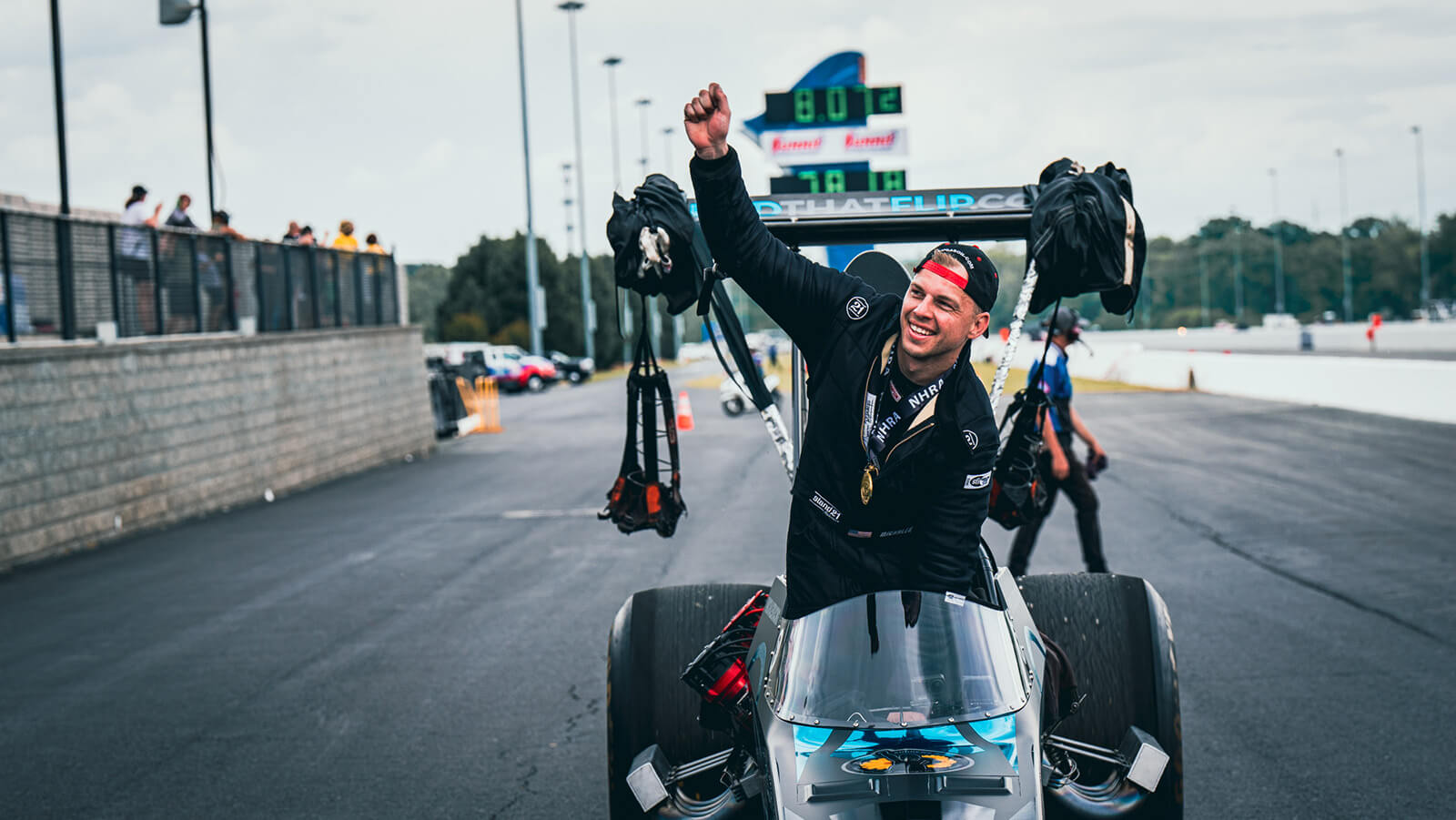 Michalek Brothers Racing (MBR) clawed their way through the field at the 2022 NHRA Four-Wide Nationals to capture their first national event win as car owners and second national event win overall. MBR has now been to four NHRA national event final rounds, three of which have come at the palatial zMAX Dragway in Charlotte, North Carolina.

“We have been grinding hard for years to reach this point,” said Kyle Michalek. “This sport requires tremendous sacrifices and commitment, and to get the win this weekend is incredibly gratifying. This is an all around team effort from our dedicated crew, our loyal partners that give us the opportunity to race at this level, and our supportive families that encourage us to pursue our dreams; we are so blessed to have so many great people in our corner. This achievement is something we’ll never forget, and only adds fuel to the fire that drives us to compete at the highest level of this sport!”

When it was all said and done, it was execution and consistency that allowed MBR to navigate their way through a stacked field of competitors en route to the event title. After securing the #8 qualifying position for the fourth race in a row by completing three runs within one-hundredth of a second of one another, MBR opened eliminations against a stout pair of cars featuring #1 qualifier Matt Cummings in his McPhillips Racing ride and #9 qualifier Karen Stalba. MBR’s 5.361 second lap at just under 270MPH was enough to win the first round and it set up a semifinal matchup with Karen Stalba, Mike Hepp, and Taylor Vetter, who was coming off a round 1 win having run low elapsed time of race day.

“We approach every run with the same level of preparation, detail, and focus as the final round,” said Kyle. “We must be ready to capitalize on round wins when they present themselves and the team met those opportunities head on this weekend during two very fast turnarounds on race day. Even though our car was not the quickest in the field, we raced smart and we did not beat ourselves. I’m very proud of our guys, and weekends like this prove that our crew can go toe-to-toe with the best in the field.”

The semifinal matchup featured all the drama that fans have come to expect with four-wide racing as the staging procedure took every millisecond of the 7-second timeout clock before the race began, and MBR fought their way to a 5.374 second lap at once again just under 270MPH to edge out two of the four cars in order to earn a birth in the final round against Jasmine Salinas, Megan Smith, and Taylor Vetter. MBR entered the final having run the third quickest run of the prior session and had the second to last lane choice. 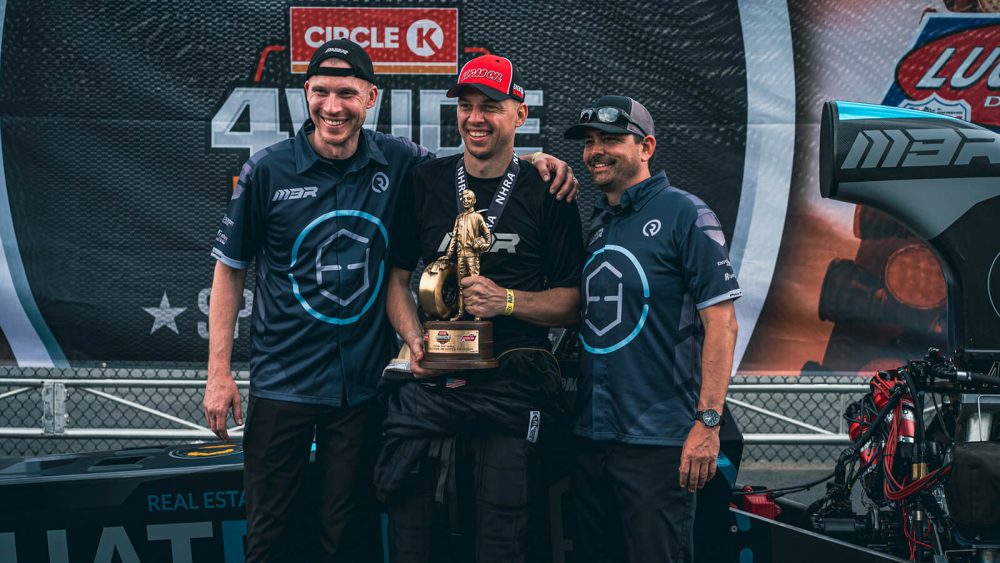 “The team has been flawless in every aspect,” said co-Crew Chief Adrian Long. “Preparation is the key to a successful race team and these guys have done an outstanding job. Everyone is really starting to gel together. We are all having a great time racing together on the track and away from it, and that is a really important aspect to have. We are still trying to find what this car really likes and dislikes, but with the team Kyle and Corey have assembled it makes that process a lot more enjoyable. I can’t thank the team enough for their hard work.”

In the final four-wide matchup of the day, MBR put together their quickest run of race day running 5.353 seconds at 265.64MPH to edge out event runner-up Jasmine Salinas’ 5.320 second run at 275.39MPH by .009 seconds on a small holeshot. This round win etched Michalek Brothers Racing’s name into the history books as just the fourth ever winner of a Top Alcohol Dragster four-wide race.

“This was just an unbelievable weekend,” said Corey. “We came into this event hoping to run hard and back up the performance we had down in Gainesville. However, it became quickly apparent that this was not going to be the weekend that we would be chasing our career best numbers, but rather one that we would need to find ways to make consistent and competitive laps. While none of our elapsed times dipped into the 5.20s or better, we were still among the quickest cars in 6 of 7 sessions. That type of consistency is something that we continually strive for, and it’s a testament to what Kyle, Adrian, and the MBR crew bring to the table. There’s so much commitment to doing things right on our team and it’s amazing to see everything come together. 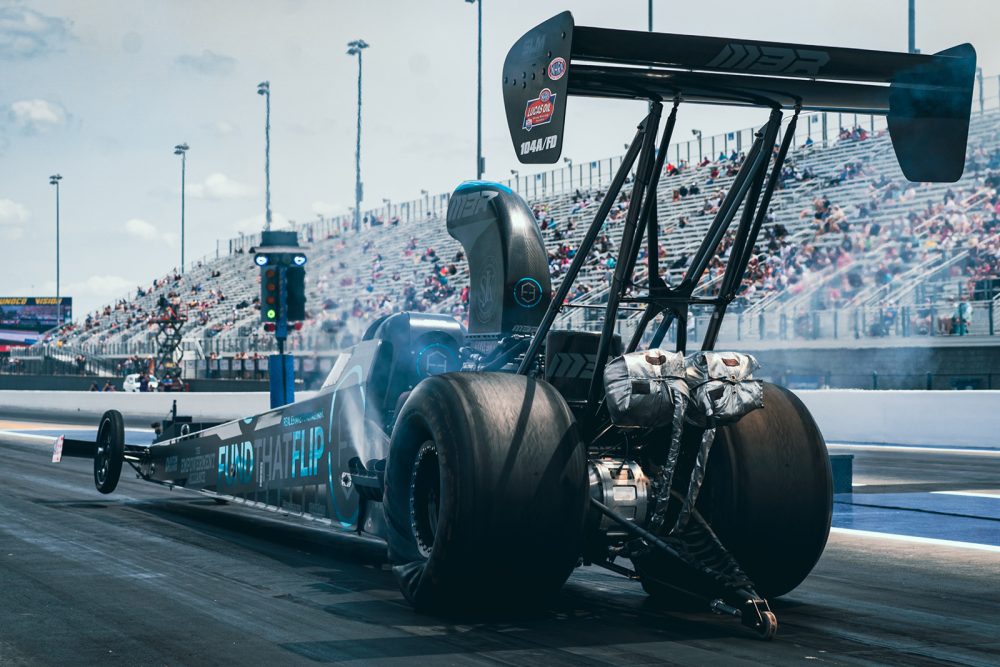 “From a non-performance related perspective, I also want to take a moment to recognize the importance of this win in terms of those who have helped us to get in this position to succeed,” Corey added. “This win not only marked our first win as car owners, it also marked the first win for Fund That Flip since becoming involved in NHRA drag racing. Fund That Flip made a substantial commitment to support us as an up-and-coming team back in 2020, and they’ve been with us every step of the way as we fought our way to this moment. It goes without saying that we are extremely grateful and proud to be associated with them, The Empowerment Alliance, and all of our other partners including our most recent addition, SJK Machine. We did it!”

Michalek Brothers racing now shifts their attention for the next month and a half towards preparations for the Norwalk, Ohio NHRA national event the weekend of June 24-26, and relocating the entire operation into their new race shop.