The 2012 NHRA Mello Yello Drag Racing Series champions were the guests of honor at Atlanta’s World of Coca-Cola just prior to the Summit Racing Equipment NHRA Southern Nationals at nearby Atlanta Dragway for the annual NHRA Mello Yello Partnership Dinner, which celebrated 12 years of Coca-Cola’s partnership with the sport. 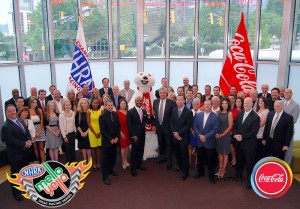