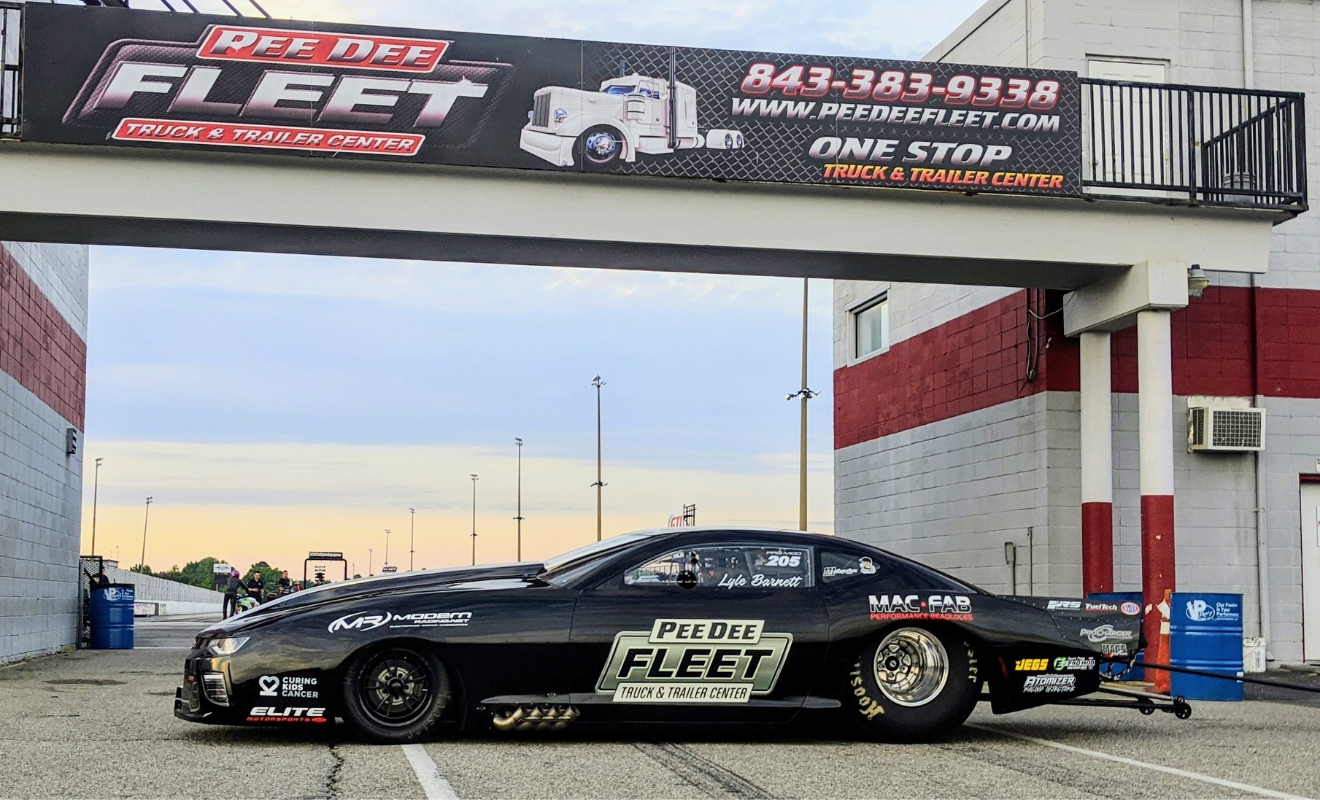 Lyle Barnett hadn’t made but a single pass down the legendary Darlington Dragway in his Elite Motorsports/Modern Racing-prepared NHRA Pro Mod Camaro before track owner Russell Miller had to ask, “What have ya’ll been doing in Mooresville?”

While Barnett and company weren’t inclined to share the numbers produced by the team’s pair of ProCharger-equipped doorslammers, they were admittedly satisfied with the results – as much as Miller, who also owns South Carolina’s Pee Dee Fleet Truck & Trailer Center, was impressed.

“We came out of the trailer and just made a lick,” said Barnett, heavily emphasizing that final word in the phrase. “It was a good run; we’re making progress – have these hot rods headed in the right direction. And we’ve always had a great relationship with Russell Miller, his wife DeeDee, everyone at PeeDee Fleet and Darlington Dragway, but I think we just got his attention. He’s a hands-on guy, he was down on the starting line for the run and right after he came over to holler at us in the pits.

“We’re talking, catching up, and one thing leads to another,” continued Barnett. “Being we’re headed to our home race here this weekend at zMAX Dragway, racing four-wide, close to Darlington and Pee Dee Fleet’s headquarters, Russell asked what we could do to get his business on the door of his race car for the weekend. Of course, we were honored to oblige, and we’ll be representing Pee Dee Fleet, Darlington Dragway and the Miller Family this coming weekend in Charlotte.”

Pee Dee Fleet, Miller’s one-stop shop for truck service, support and parts in Hartsville, South Carolina, has demonstrated his passion for the sport of drag racing and, specifically, fast doorslammer drag racing on numerous occasions, making the partnership between he and Barnett that of perfect sense. For Barnett, the relationship represents not only an opportunity in the business of racing, but also a dream come true.

“This is the kind of thing you dream of all your life,” he admitted. “Jumping in a race car with your name on the window and a sponsor’s logo on the door? What more do you want? For me, this is it; this is a continuation of the dream – living the dream.

“We’ve had a great relationship with Russell Miller, his family and his team for a long time. They sponsored me back in the Dart – the record-setting leaf spring car – and we’ve tested here a lot; just a fantastic quarter-mile track that’s right down the road. This whole team, this group of guys, we’re always excited to go drag racing, but to be able to go out there at our closest-to-home race in front of our friends and family, and represent someone like Mr. Miller, Pee Dee Fleet and Darlington Dragway, it’s an honor.”

Barnett’s excitement to fly the Pee Dee Fleet colors at the fast-approaching NHRA Four-Wide Nationals is likely matched only by that of his eagerness to light the boards at one of drag racing’s most over-the-top facilities in his and teammate Alex Laughlin’s pair of Justin Elkes and Anthony Lum-tuned race cars.

“We’ve been wearing these cars out on the dyno,” concluded Barnett. “All of us at Modern Racing, we’ve been working on these things around the clock, trying to make the most of all this Elite Performance horsepower. We’ve learned a lot, been sneaking up on these things and we’ve got a pair of competitive race cars. We don’t go to a race without the expectation of winning, but we’re only getting more confident every time we let go of the button.”