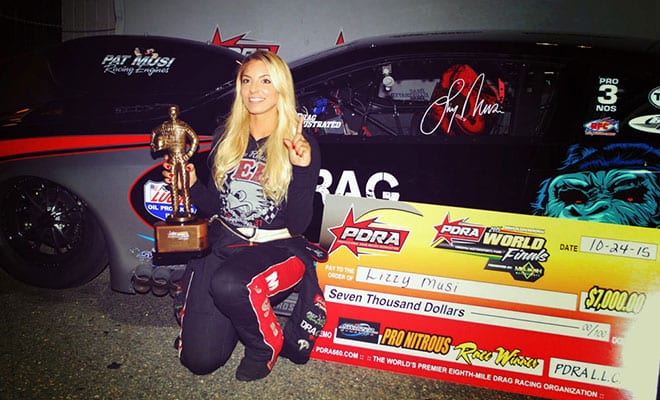 A return to Virginia Motorsports Park was exactly what Professional Drag Racers Association (PDRA) Pro Nitrous star Lizzy Musi needed in order to end a turbulent season on a high note. The 24-year-old second-generation driver made history at the facility one year ago when she became the first woman to earn a national event win in Switzer Dynamics Pro Nitrous, and her follow-up performance was even better.

“This is an incredible way to end the season,” Musi said from the winner’s circle after defeating class standouts Mike Castellana, Chris Rini, Jay Cox, and Stevie Jackson with a combination of excellent reaction times and class-leading performance. “I can’t say enough about my team. Of course I have to thank my dad, family, and crew. My car owner, Frank Brandao, came to the U.S. from Curacao just for this race so it’s awesome to have him here for this win. Pro Nitrous champion Rickie Smith has been helping us sort out the chassis, and we brought on Patrick Barnhill as a tuner a few races ago and he really helped us get on the right track. It all came together.” 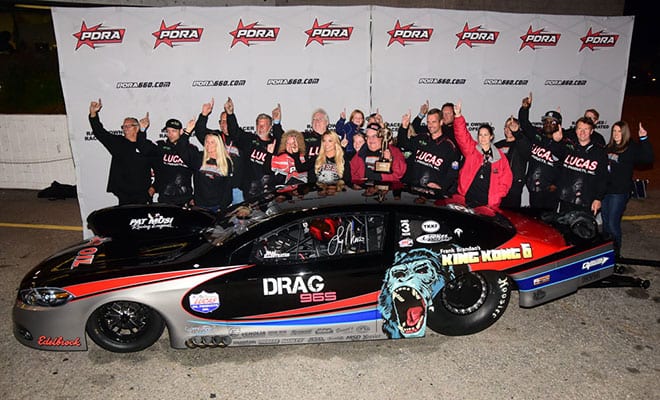 After a stellar Pro Nitrous rookie season last year in which she finished third in the championship points standings and was named PDRA Rookie of the Year, expectations surrounding Musi were very high as she entered 2015 with a brand new Dodge Dart from Jerry Bickel Race Cars and a state-of-the-art Pat Musi Racing Engines 941 EFI engine. However, the excitement quickly dissipated when she suffered a finish line crash at the season-opening PDRA race in Dallas.

“Wrecking the car at the first race was a nightmare scenario to start the season,” said Musi. “But to battle back from that low point at the first race and win the last race and set the speed record is a testament to this team. My supporters, including Lucas Oil, Edelbrock, and Drag965 stuck by me all the way and that means the world to me.

“This gives us that extra boost of energy and confidence to continue working hard and getting better over the winter,” the Mooresville, North Carolina resident said. “Pro Nitrous is so tough and it’s only getting tougher every day. You have to be at the top of your game every round, so we can’t stop working to get better every single day.”