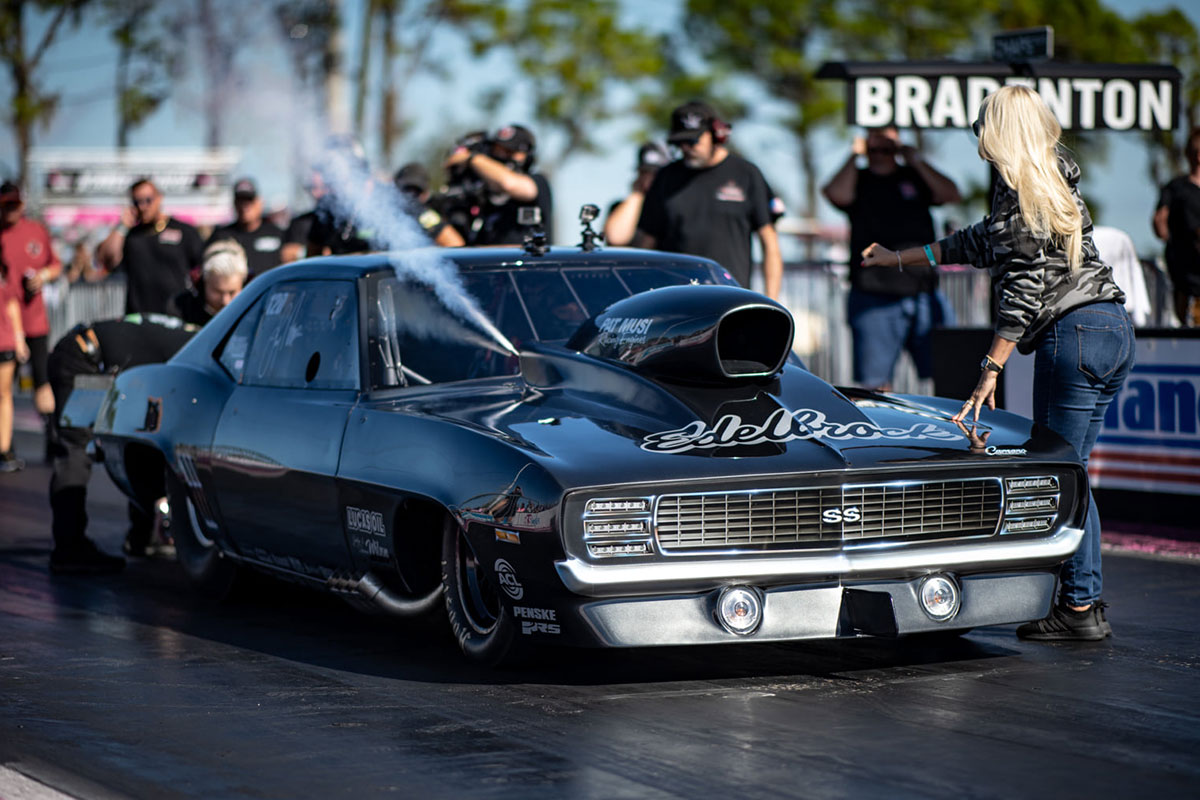 There was some early-season adversity, but Lizzy Musi and the Musi Racing team finished the 2021 Street Outlaws: No Prep Kings season in remarkable fashion, capping off an impressive year for the team and star driver.

After two late-season wins and a runner-up in their Edelbrock and Lucas Oil-powered “Bonnie” Camaro, Musi won the No Prep Kings Team Attack at last weekend’s finale in Bradenton, FL.

It closes out a top-five finish in the talent-heavy circuit and came after the team showed tremendous resolve in recovering from a top-end crash in Darlington, SC, and debuting a new car in the middle of the year.

“We had such a rocky start and didn’t have the new car at the beginning of the year,” Pat Musi said. “We didn’t do really well at the first couple races and about the time we had things on track, we had that hiccup and the crash with the new car. But the big story is going 45 days from the crash to the winner’s circle. That was pretty impressive and everything really came together to end the year. Lizzy and this whole team just really worked hard.”

It sends the Musi Racing team into the off-season with plenty of momentum and lots to be proud of after ending the season on a strong note.

After the crash in Darlington, the Pat Musi Racing Engines-powered Camaro made it to the winner’s circle in 45 days, racing to victories in both Tuscon, AZ, and Denver.

Both wins came in tough conditions for a nitrous car, and Musi followed it up with a runner-up at Texas Motorplex near Dallas, then a standout performance last weekend in Bradenton to win the Team Attack. That finished off a rigorous stretch of six straight race weekends to end the year, but Musi Racing came together well. Combined, it showcased Musi’s driving talents and the team around her, starting with Robert Hayes’ ability to rebuild the car in less than two months after the crash.

“Lizzy got right back in the car after the crash and chose not to sit out,” Pat Musi said. “That showed what a good driver she is. We just needed to race. We did the best we could with the old car until the new car was ready, and then we picked up a couple wins. That Denver win was the highlight and we’ve just got a really good team around here.”

That bodes well for 2022 and Musi knows his team will be ready for something big during next year’s Street Outlaws: No Prep Kings season. The work starts now, but with a top-performing car, driver and team, Musi has big expectations for how the team can perform in 2022.

“With the momentum we have going into next season, everyone is really pumped up about it,” Musi said. “Our sponsors are really happy and we’ll be ready for next year. We’re starting out with plenty of parts and a great car, so we’ll be in great shape. Lizzy’s done a great job and we’re really excited about everything heading into next year.”