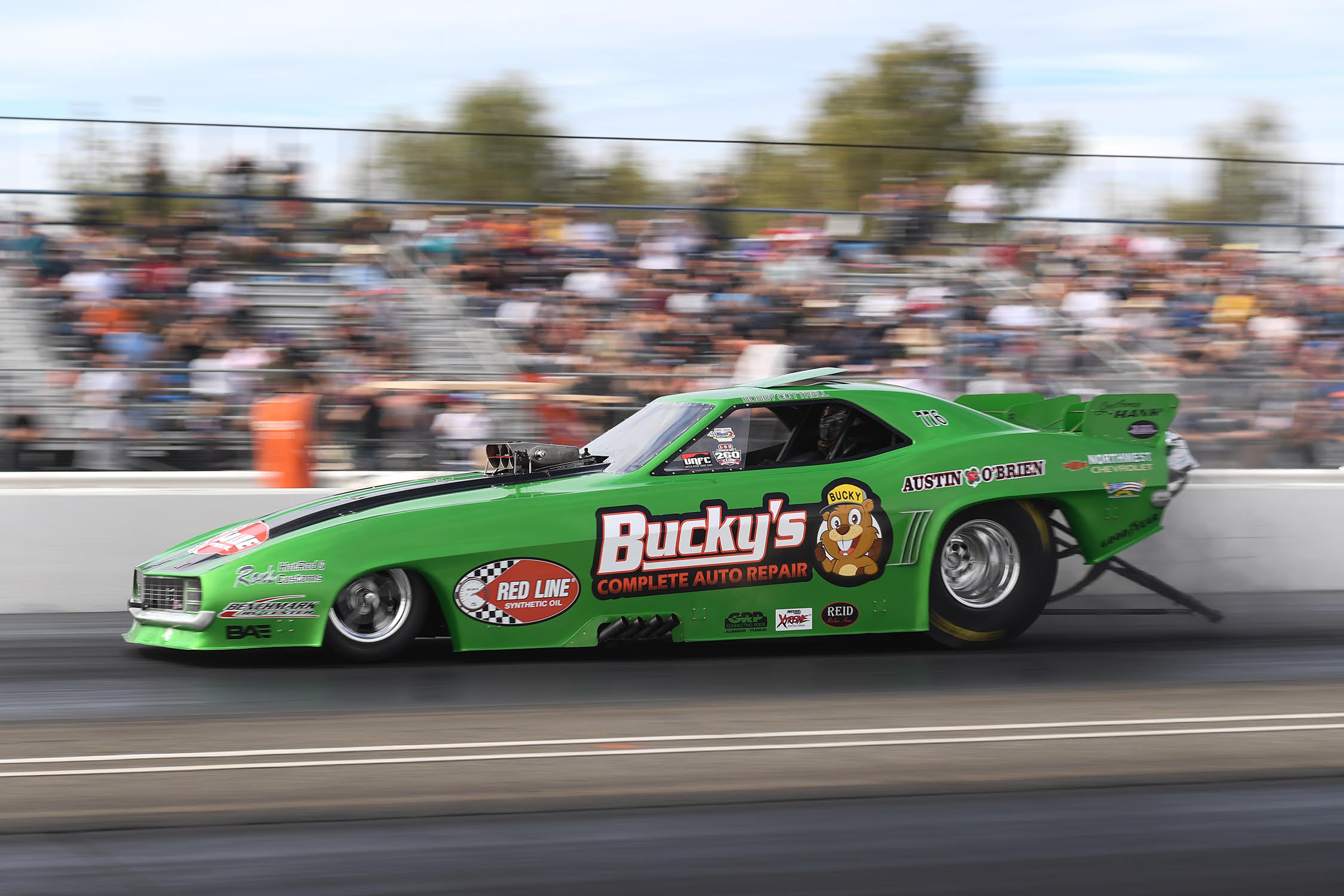 Anticipation is high among the nitro-burning, classic flip-top-bodied machines ready to do battle in Legends Nitro Funny Cars presented by Red Line Synthetic Oil competition at the NHRA Nevada Nationals Oct. 28-30. The entries being showcased at the penultimate event of the NHRA Camping World Drag Racing Series held at The Strip at Las Vegas Motor Speedway will compete in an eight-car elimination format.

The following provisional lineup is slated for action at this weekend’s NHRA Nevada Nationals:

The diverse lineup of drivers and machines will coalesce for a thrilling show taking place in prominent spots throughout the weekend schedule following sessions in the NHRA Camping World Professional categories. The field includes heavy hitters such as recently-crowned five-time NHRA Hot Rod Heritage Series champion Cottrell along with past champions Horan, Hodgson, and Krabill. Fans may also recognize 34-time Top Fuel champion Cory McClenathan in the “Mac Attack” ’70 Firebird designed with graphics reminiscent of the popular dragsters he drove to prominence in the early 1990s. 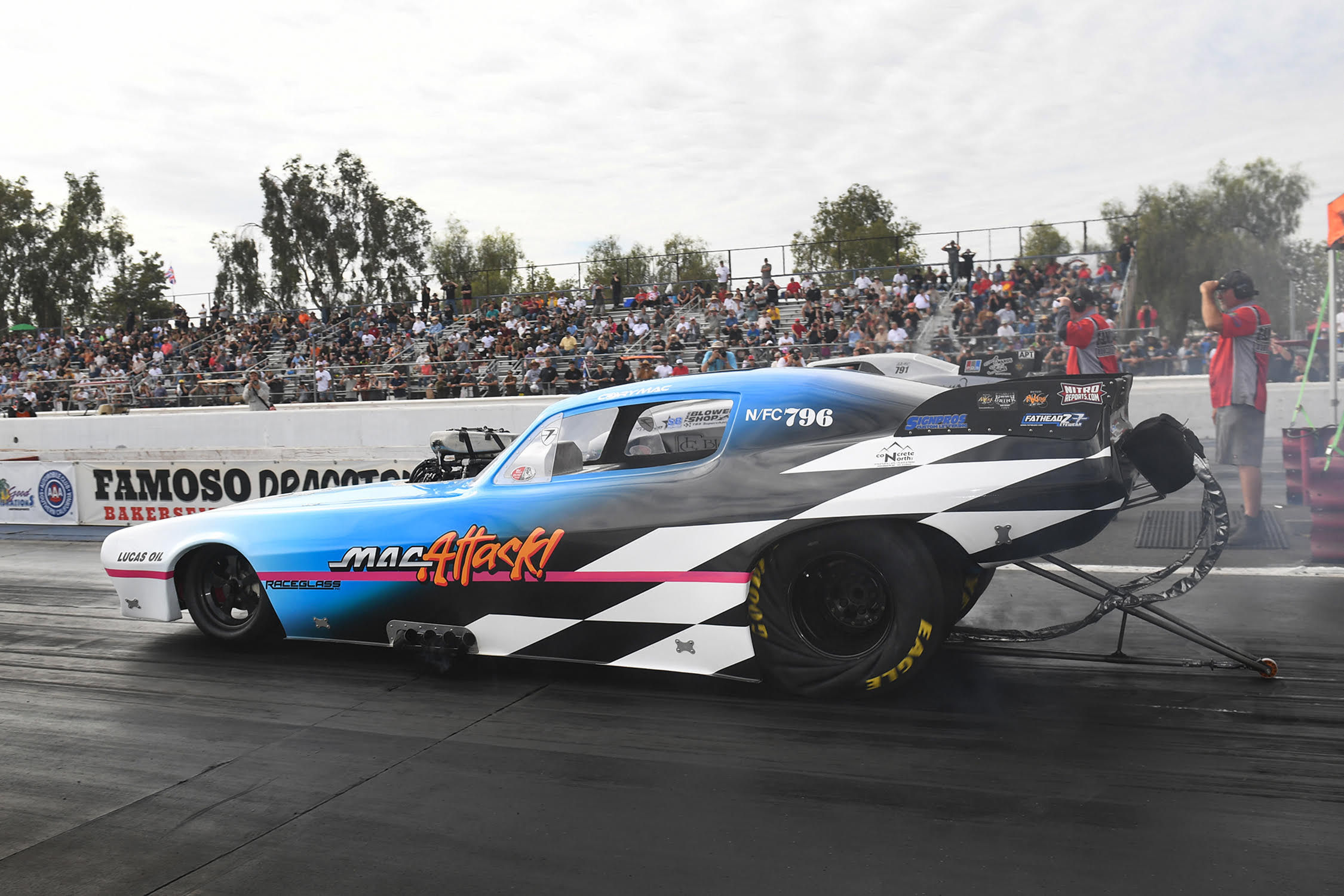 The category has drawn the interest of both lifetime drag racers and competitors who made the switch from other forms of motorsport. Jeff Gregory is driving for Dale Murray and the “Madness” team that made its name in drag boat racing; former sprint car racer Boychuk has become a staple in the category since 2006; Monise brings a road-racing pedigree and diverse skill-set to father-in-law and veteran Top Alcohol Funny Car racer Keith Clark’s “Quarter Pounder”; and former sand racer Morris is sporting the familiar livery of Eddie Knox’s “Problem Child” Top Fuel Hydro.

Interestingly, Morris has never stepped foot on The Strip at Las Vegas Motor Speedway. The recent winner of the California Hot Rod Reunion relishes the opportunity to visit the facility and compete for the Legends Nitro Funny Cars win.

“This is a great opportunity for everyone in this class to show what these cars are about,” said Morris. “I’ve heard so many great things about The Strip and can’t wait to see it for myself. Our first big win last weekend was a long time coming, so we get to carry some momentum with us to a new track.”

Morris, like his competitors, ponders the balancing act of collectively putting on a show and the inevitable push for victory that occurs when a Wally is awarded to one driver on Sunday.

“I think the mentality of winning puts everything else in the backseat anytime a driver puts on their firesuit and helmet,” said Morris. “At the same time, everyone appreciates the platform we’re being given, so we want to put on a good show and bring attention to this category. We’re excited about this weekend.”

Legends Nitro Funny Cars presented by Red Line Synthetic Oil qualifying will take place at 2:30 and 5:20 p.m. on Friday, Oct. 28. The first two elimination rounds will occur at 2 and 5:35 p.m. on Saturday, Oct. 29. The winner will be decided in the final round at 3:35 p.m. on Sunday, Oct. 30. The cars and drivers will be accessible to fans in the pit area throughout the event.

To purchase tickets to the NHRA Nevada Nationals at The Strip at Las Vegas Motor Speedway, call 800-644-4444 or visit www.lvms.com. Children 12 and under are admitted free in general admissions areas with a paid adult. For more information about NHRA, visit www.nhra.com.