Coming off a successful stint on the Bonneville Salt Flats that saw him set a new land speed record for his class, Summit Racing driver Jason Line will return to his chosen form of motorsports competition this weekend, resuming the defense of his NHRA Pro Stock championship at the Lucas Oil NHRA Nationals in Brainerd, Minn.

As a native Minnesotan, this race has always held a special place for Line, who has often expressed he would rather win this event than any other on the Full Throttle Drag Racing Circuit.  This year, however, he has decided to employ a different approach, viewing it as just another event.  Even so, his desire for winning his home state race has certainly not diminished. 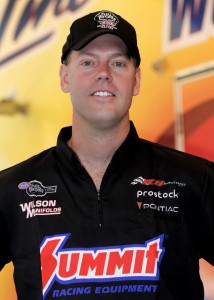 “Last weekend in Bonneville was tremendous, and I really want to thank everyone who made it possible,” said Line.  “However, it’s now time to get back to work.  There are only two races before the start of the Countdown championship playoff, and we need to get our Summit Racing Camaros completely dialed in.

“In the past, this was the one race I had to win.  Although I’ve come close with a couple runner-up finishes, the Wally has so far eluded me, so this year, I’m treating Brainerd like any of the other races.  Naturally, I still want to win it, just as I do every race, but in the big picture we have other work to do, and that is what I am going to concentrate on.”

The work Line refers to is the team’s continued familiarization with their race cars.  Even coming off a runner-up finish in Seattle two weeks ago, both he and his KB Racing crew know they will need to have a handle on their ride’s performance requirements when the championship playoff starts next month in Charlotte, N.C.

“We view these last two races as extended test sessions leading into the Countdown,” said Line.  “Looking at the standings, I believe both Greg and I are fairly secure where we are, barring any unforeseen circumstance, of course.

“Although one of our goals will always remain winning every race we enter, we also realize the importance of getting these Summit Racing Camaros completely dialed in for the playoffs, so we are going to take advantage of every opportunity we get to test and learn more about them, including during qualifying this weekend.”

Finally, despite his claims of seeing this race like the other 22 on the schedule, when pressed the two-time champion admits that the North Star state event remains among his favorites, especially in light of the fact that virtually his entire family will be competing as well.  New attitude or not, a win on Sunday would be most special.

“I always look forward to racing in Brainerd, as it is the one time all year I get to share the racetrack with my family,” admitted Line.  “It reminds me of the old times when we did it for fun and we would all take our cars to BIR for the nationals, which was very cool.  Being able to go there and be a part of it once again is something I really enjoy, and when I’m not working on our Summit Racing Camaros, I know I will be up there watching all the Stock and Super Stock action, cheering for my family, as well as a lot of the friends I grew up with.

“All in all, it promises to be a fun weekend, and if somehow we do make it to the winner’s circle, it will be a great and memorable time in the Line household.”